The simplest way is to tell it to simply go away. Remember who has the power over you and that person can only be you. In other words, just use your own will to tell it to go away. When something bothers me, even if is an entity that I created out of fear I say to it that it will go away or it will have a huge problem with king Paimon (because he protects me at all times) along with his whole army. The entity then is the one who gets affraid…if you know what I mean

You are getting annoyed by them. Denying their existance is like destroying them compmetely inside out. You can also try calling your mentors for help. Well, if I sense a spirit trying to harm me I’m like “Learn your place! I am under the protection of king Paimon himself, how dare you anoying me like that!” Or something like that, maybe a little less aggressive. And they never show up again 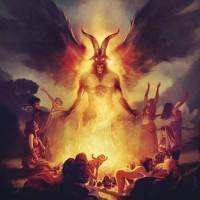 Incantation to Lilith to Banish Jehovah

Several Satanists who practice the Craft surrounded by or prayed for by Christians have noticed celestial forces inhibiting or weakening their rituals. This is an incantation to Lilith to protect t…

If you wanted to, you could work with zagan to “cloak” your occult items. Then have him cloud their minds and then you could after that, bind them from acting against you and instead act according to your will. Rendering them utterly useless until you have a more desirable situation. Better yet, why not go to the master manipulator, Nyaralethotep himself?

Want me to just handle it?

Ask Duke Cohzier for help as well, if you carry his sigil with you in your wallet or pocket, and silently repeat his enn in your mind as they pray, that will assist:

COHZIER Being a most excellent Demonic Duke, devoted to ending the tyranny and slavery, caused by some minor desert spirit which hath lied and trolled the great and the true, and the unwise liars and leeches alike, in former times. [image] This is his seal: [image] His enn: IMNA ZHAHRULLIS NAMNA COHZIER He is under the dark aspect of Bael, namely, the toad-headed aspect. COHZIER is “Of The Rank Of A Duke” which is …