Platonic solids and chakra what correspondence is the right one?

I would like to settle this, at least within the LHP community. There are a few versions going around and I want to know once and for all what we should choose as a consensus. What makes most sense to you and why do you believe that version is correct? 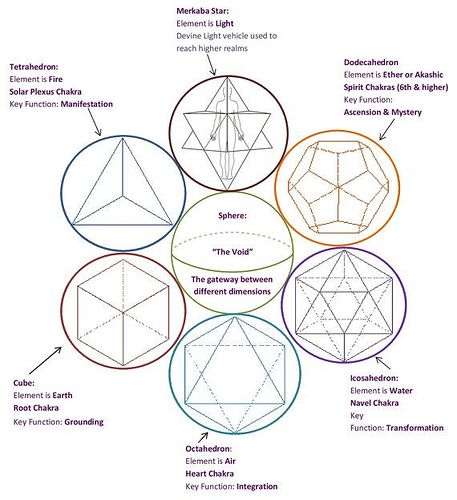 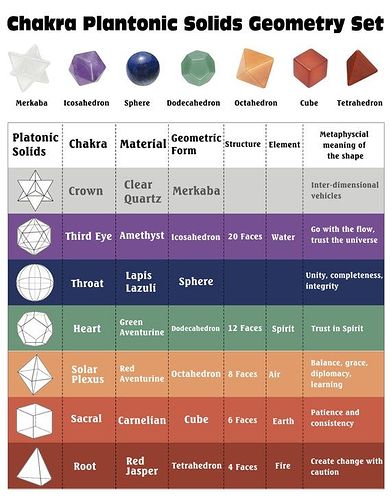 I’m not sure, I attach them to my fingers and spin them around in my mind and Craft objects, what is your question?

In my opinion, none of these tables are correct as they were created by Westerners who have no real connection to the chakras. When looking for the correct geometrical figures for the chakras, consider the yantras of the chakras.

You can see that something is wrong with the tables when you look at the word Merkaba. The Merkaba comes from the Hebrew and is called Merkava, which means something like God’s chariot. In the New Age it became Merkaba and it is claimed that this word comes from Egyptian.

The chakras are concepts from Tantra and have nothing in common with the concepts from Kabbalah, which is why these two traditions should not really be falsified.

In Tantra, the exit from the physical body does not take place via the Merkaba or a separate vehicle but via the Ajna Chakra.

The goal is to find out what platonic solids best match the chakras. For example some say the root is the tetrahedron and others say it’s the cube.

In my opinion, none of these tables are correct as they were created by Westerners who have no real connection to the chakras.

As for the Merkaba that’s a whole other conversation we should have but for now I don’t have time.
As for your statement I’m not sure what you mean by it. Do westerners not have chakras? Are chakras not actually a valid thing?
All spiritual philosophies have come about through a combination of 2 factors. A common root or ancestral base going back to prehistoric origins in shamanistic practices. And 2 the Continued sharing and absorbing of the philosophies of every culture coming in contact with each other be it through trade or even war. The entire reason the chakras are recognized in the first place is because different cultures came together and created something new based on their commonalities. If you disagree and don’t want to be part of this sharing, evolving, and connecting process that always has been and always will be part of the human experience that’s a valid choice you can make for yourself. But really only for yourself. If our ancestors don’t want us expanding on what they discovered then they can come tell us themselves but until then I’m going to keep doing what they did.

This has always been an interesting concept to me, personally I would look at it from an alternate perspective. Usually in the yogic sciences its said the singular shape connected not only to all chakras but existence itself is the triangle.

For example the chakras are often depicted as wheels, disks or spheres, however the system from which they derive actually state their all triangle it is merely the motion of their movement and momentum which give them the spiralling wheel effect/appearance.

For example I’ll quote this below.

"There is a certain geometry to the physical existence and to the energy existence. Everything in the universe, from the atomic to the cosmic, works the way it does because of geometric perfection. One of the most fundamental and the most stable forms in geometry is a triangle. In the human energy system, there are two equilateral triangles – an upward-pointing one below, and a downward-pointing one above. Normally, these two triangles meet just above the anahata. To work with your mind and imagination, it is important to adjust the alignment of the two triangles at least to some extent. The ideal alignment would be that the upward-pointing and the downward-pointing triangles intersect to such an extent that they form a perfect six-pointed star with six equilateral triangles on the outside.

With the necessary alignment, you will be able to exercise your imagination in such a way that you can manifest what you want outside of you. To enhance the power of your imagination, you need to lift the upward-pointing triangle, which in terms of the geometry of the body is the foundation, to such an extent that it includes the vishuddhi, which is the basis of your imagination. There is sadhana to move it up and hold it there, all the time. If you do not have such sadhana, a simple way to achieve this is not to eat for a period of time. Generally, when the stomach is empty, the upward-pointing triangle tends to rise by itself. Once you eat, it descends again.

There are one hundred and fourteen chakras in the body. The seventy-two thousand nadis, or energy pathways in the system, have one hundred and fourteen significant junction points, where the nadis meet in substantial numbers and redistribute themselves. These points are generally known as chakras, which literally means “wheel” or “circle,” though they are actually triangles. We call them “chakras” because that suggests movement – moving forward. Out of these hundred and fourteen, two are outside of the physical realm. For most human beings, these two are very feeble, unless they put in the necessary sadhana. Out of the remaining one hundred and twelve chakras, a few are generally located in certain parts of the body, on a physiological level. The rest of the chakras could be moving to some extent.

You should be able to do everything well, with a little practice. But this will not work if your energy system is rigid. So, keeping your system mobile is important, not just because we want to do different kinds of activities in the world. It also gives you a certain flexibility of experience, that you are comfortable in any kind of situation. To be at ease, your energies must be flexible. These hundred and twelve chakras can be used as hundred and twelve doorways to your ultimate nature. That is why Adiyogi gave one hundred and twelve ways to attain to the ultimate.

To be able to move this complex triangular structure of your physiology the way you want it requires a different level of sadhana. But the most fundamental thing is that these two triangles should intersect. Normally, the upward-pointing triangle is below and the downward-pointing triangle is above. If you bring the two equilateral triangles to a point where they intersect in such a way that they form a star with six equilateral triangles, the system is in balance and becomes very receptive. My work is about presence and transmitting something, for which you need receptivity. My words are not going to enlighten you. I only say things to confuse you, because you cannot enlighten anyone by talking. It is the presence that has the power to transform"

The sacred geometry to these vortices or spiritual organs if you will, known as chakras are connected mostly of course with the triangle. Depending upon the working system or tradition I’ve often seen the shapes associated to them differ dramatically from the traditional roots.

So theoretically speaking we could say it’s all based on the observer, if reality is truly subjective and the individual is the grand architect of their existence based on their observation or perception of it, then often spiritual symbolism is personal. Just like magickal and spiritual symbols are often used differently than what their originally intended for, normally because of the individuals personal belief, ideology, philosophy or just alternative observation.

Whilst I’m not heavily educated on the matter of the platonic solids entirely, I do have some understanding of them, I’d personally say try a little bit of everything and use what works for you. However hopefully the above helps even in a subtle or minor capacity 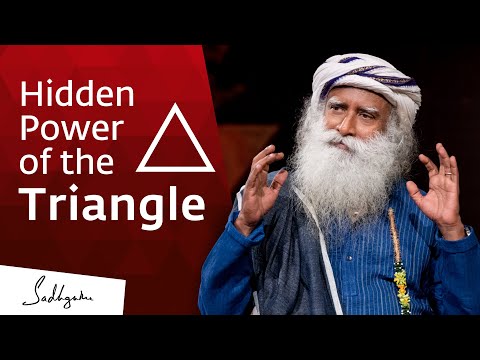 So theoretically speaking we could say it’s all based on the observer, if reality is truly subjective and the individual is the grand architect of their existence based on their observation or perception of it, then often spiritual symbolism is personal. Just like magickal and spiritual symbols are often used differently than what their originally intended for, normally because of the individuals personal belief, ideology, philosophy or just alternative observation.

Go ahead, you can say it… The Baphomet

yeah it is most certainly a interesting concept I once conducted an experiment with this on a a fellow coven member wherein I presented to them an odd rock I found. I fabricated specific associations and meanings to that particular rock and stated it had certain effects. I gave them some experimental meditations on it and the results eventually came in successful.

(I should state for the record they agreed a long time before that, they would be willing to participate in such things and preferred not to be notified until it was concluded).

Yes Baphomet would be an excellent example of this

some depict it being Satanic, others understand it as an artistic depiction of balance, opposites and so forth. Hence the depiction of female, male, animal, human, above, below, light and dark etc. Some depict it as a infernal/demonic spirit and in a satanic order which for some reason I cannot type its believed to be an actual Acasual goddess.

Just take a look at which concepts in New Age or Western esotericism are associated with the heart chakra and then look at what this chakra has for a meaning in tantra. The understanding is completely different.

Just take a look at which concepts in New Age or Western esotericism are associated with the heart chakra and then look at what this chakra has for a meaning in tantra. The understanding is completely different.

I can see what you mean and I definitely appreciate your input here. What other examples could you give and or links for us to follow?

sound you make as you exhale to charge the heart lotus.

And if you want to “align” the energy centers or mass clusters in the body then you would do yoga like the Tibetan fountain of youth to physical stretch these areas.