Not quite sure what I’m looking for. The photo would only be useful if you did a before picture as well. Without that, there is no way to tell any differences

Hmm, even after comparing I can’t seem to tell much difference. Any subtle differences I kind of notice can just be made out to different lighting and different camera position. Were you hoping for a noticeable physical difference before and after? Or was this just a test to see if there was any noticeable difference? 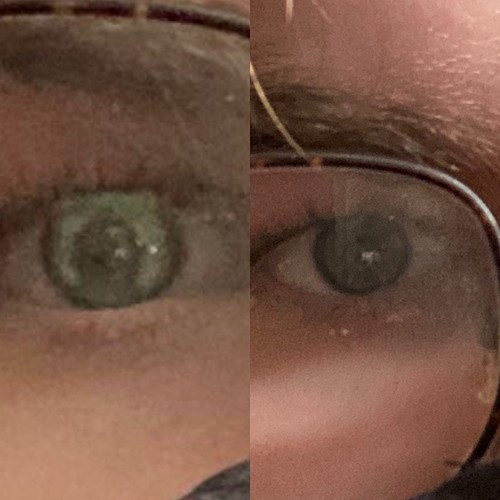 Zoomed in, looks like a hooded figure with a skeletal face in your eye in the pic on the left.

Sure does, but it looks like a reflection something mundane off of the glasses.

If you do it again. Maybe take off your glasses for before and after so mundane reflections aren’t here?

People exchange energy between each other all the time. This is something natural. When it’s done intentionally we call it vampirism. There is no reason for weird things to suddenly start happening to your body just because you attach the word “vampirism” to this natural phenomenon. But if you believe something did happen, then repeat the experiment as @Angelb1083 said without your glasses.