Hi, its printing a pentagram in black background in a normal A4 size ok? or is that too small?

or can i put the pentagram as my background in my 32’’ led tv?

asking because i want to start now but if needs to be in a bigger size and/or cloth/poster ill have to get that and i can only buy that stuff in weekend.
Thanks

Printing is fine but if possible just draw it.
thats how I did mine - hangs on the south wall.
thats it

Actually you can draw it on anything with whatever materials you have on hand. The size is not the issue, nor how or what, what matters is that you draw it, and meditate on it.

I just got a 2’ x 3’ piece of black construction paper from Michaels and painted a pentagram about the size of a dinner paint in red acrylic paint. Worked well for me.

I’m not sure if using an LED background would have the same effect or not, as it’s emits light rather than a solid background.

— so Paint as Big a Penta on the “blank” Wall as you want… once it dries, its not seen, and then turn on a BlackLight- and it lights up (whitish-bluish glow for ex), and then switch off the wall… click… Occulted- Hidden In Plain Site (sight)

therefore could just put it on the wall (assuming you have a free wall space (if covered in hanging pictures- then behind a picture/poster) just the idea of being able to paint it directly on a wall, which should give alot of space-size ?

< < later edit: just to comment the above came to mind, and appealed to the “hidden in plain sight” -as well as no “poster board” needed… one could use “butcher paper” that paper on big rolls… anyway- in terms of size, I’d say about 3inches diameter to about 3feetdiameter… smaller than 3 inches it seems would be Seen by the eyes as an item in visual field, vs an entire focal… thus 4or5inches would be about “small figurine” size- just a thought > > to make my response more tied to the original question

Does the pentagram have to be perfect, i mean all the right angles etc?
thanks

I did finger painting, and I’m a shitty artist, so the Inverted pentagram was quite primal looking… which worked well for setting the scene. I used bright red paint on black cardboard. I thought I would go above and beyond and smear my blood and semen into the lines for some added oomph! oomph is what I got, I think it amplified the dark power surrounding me and I was psychogically fucked up for about a week until I retired the symbol. maybe too much too early on, not sure what happened.

I didn’t see static or flashing lines, but the symbol did appear 3D on and off.

I got a yard’s worth of fabric and painted a silver inverted pent on it. The pent is about a foot and a half in size. 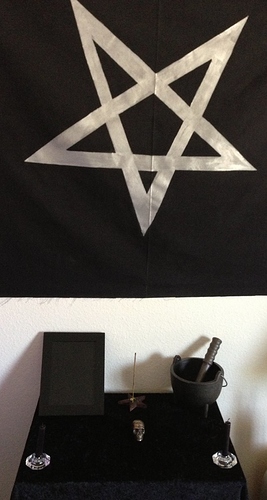