I have been communicating with Belial for a bit now. Recently he told me I already have a pact with him. So far as I know, I haven’t formed any agreements with him, or any other for that matter. That lead me to wonder if one may have been made in a previous life and carried it into the present one.
Is this something that happens?
I am very new to all this. A pendulum is the only form of communication I can use successfully at the moment. It makes it hard to get specifics since I don’t even know what to ask.

When I met Lucifer I didnt know anything about the LHP. He told me he would “send out a call” for spirits to help me on my path. The ones that answered he said were ones that I had known from past lives.

If you can its good to have a general idea of your mistakes and lessons learned in your past life. That way you don’t make the same mistakes again. So you arent wasting your life just doing the same mistake. But don’t be so overly concerned that your overanalyzing every move you make.

For example I had at least one past life with Belial and I was a worshipper of his in a temple. Now if I had recalled this past life before I realized that humans are really gods than I might be worshipping him in this life.

I had a hard time not because of the worshipping aspect. My first past life memory was one of the priests betrayed Belial and Belial possesed me and ripped the guys soul out of his body. When he left me I looked down and the guys body had this look of indescribable terror. I couldn’t get that look out of my mind for a long time.

Belial actually meant well. He was trying to show me how to rip a persons soul out. Well that didnt work LOL

For example I had at least one past life with Belial and I was a worshipper of his in a temple.

Do you know what his name was or what culture or country it was?

Spain, about 800 years ago. We were a very small comunity, up in some hills. Two sceletal figures, visible at the temple. I remember one of them looking at me, while I was in deep extatic trance. A lot of blood oferings and incantations on Hebrew.
Morion were his name.

Do you have some memories?

It was somewhere in Mesopotamia or Sumeria somewhere not sure. He was worshipped as a horned bull god. In the area it was mostly him and a death god that was worshipped. There were very specific tests he had to be able to work in the temple. The females had to resist seduction and were initated into sex magic and the males he would just try to scare the shit out of them LOL.

Some of the guys would just come running out of cave. And they are all comparing what they saw.

I’ve considered this possibility with azazel, He has surfaced in my life a multiple times (drop kicking me where i aimed my goals) but i have never formally evoked him.His name would make itself known one way or another then a truck load of synchronicity would follow but i didnt thing much of it at the time.

Hell, He was the one who told me his name when he decided to poke his head over my shoulder while i was meditating, i finally went “who the fuck are you?!?”.

before i looked into it i had no clue who or what i was dealing with. Learned alot from him.

My first past life memory was one of the priests betrayed Belial and Belial possesed me and ripped the guys soul out of his body.

That is a pretty intense first memory!

I haven’t tried any past life exploration yet. But, I suppose I need to if I’m going to figure out what this pact is. It’s hard to know how to fulfill my part when I don’t know what the pact is. Heck, I don’t even know what Belial agreed to do.

It’s interesting that you say he was a horned bull god. I got this bull figurine maybe 7 yrs ago at a dollar store. It screamed ancient god statue. I had to buy it. 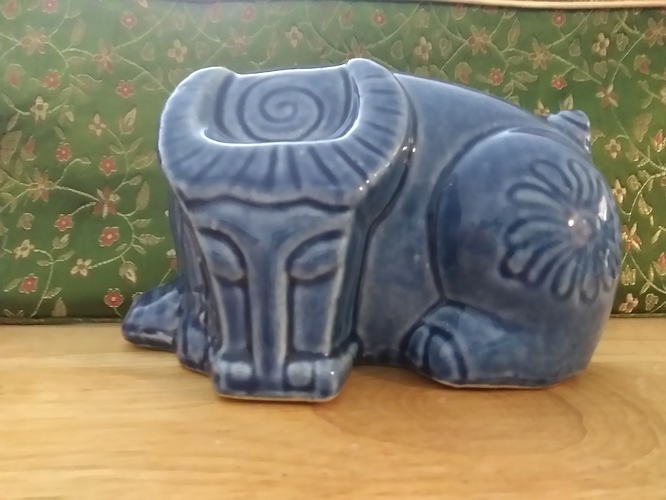 Belial has been very cautious in revealing himself to me. After introducing his existence it was three years before he gave me his name.

Not that I didn’t try to figure it out. Any time I asked he refused to give anything more that indirect clues. If I asked anyone else for help in learning about who he was, he interfered and I learned nothing.

As time passed and, I suppose, I came to trust him more, I got more info such as he was a goetic demon.

Then one day at work, Bam! I knew who it was.

That is a pretty intense first memory!

Oops I meant first past life memory with HIM. I’d have to think of what my first ever one was.