ABADDON: The Angel Of The Abyss, Volume 4 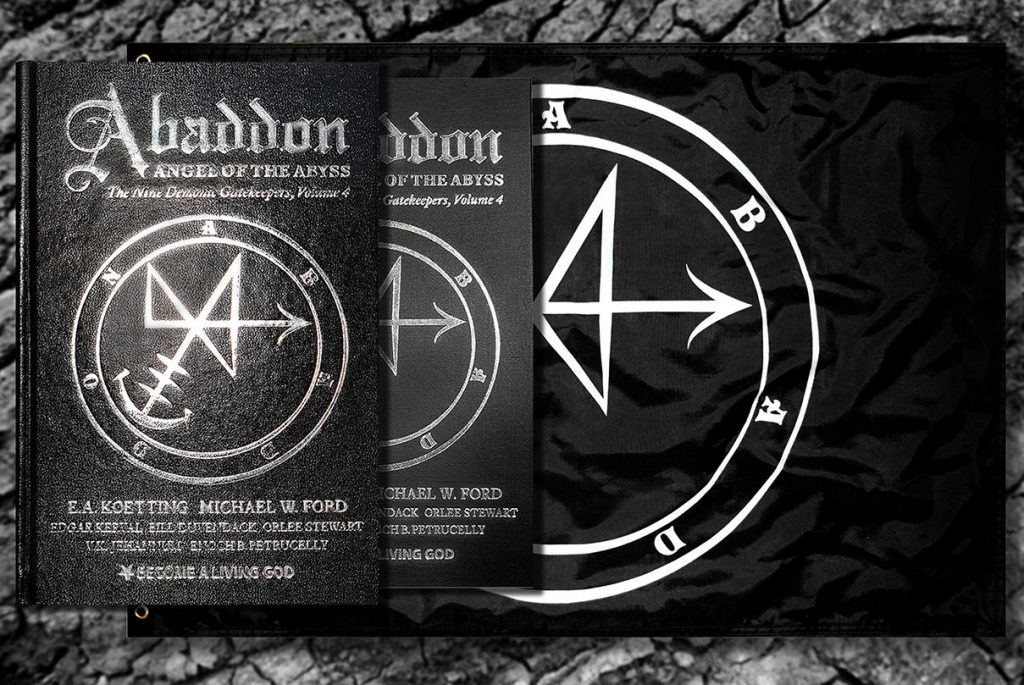 This grimoire presents a really interesting approach to Left-Hand Path magick in that it explores Abaddon through a diversity of individualistic gnosis. My work is Apollyon explores the hidden history, etymology, and mythology of Abaddon. I strongly recommend this compendium — not just because I contributed to it — but because it provides an excellent study on how to approach Abaddon in your own unique magickal way. Every author reveals how they have explored Abaddon and uniquely adapted his energies, his deific masks, to their own initiatory practices.

Abaddon will be a powerful ally, if you know how to work with him. He unveils the secrets of darkness to us, guiding us to the perfect understanding of the diverse universes maps. Each working with abaddon has different characteristics, powers, secrets and information to open the paths to self-deification. Among his many functions, one is to be the Messenger of Destruction, and travel as an agent of chaos destroying worlds at different universes, so from there comes the name “Destroyer of Worlds.” He is the one who guides the Initiated into the Mysteries of the Void. Abaddon is a God who has many masks. He’s present in diverse cultures in different forms. Many people see him as the incarnation of the Devil, or as the opposer Satan himself.

Orlee Stewart, author of the Black Magician’s Guide to the Ars Goetia:

The work I composed for the Compendium of Abaddon began almost a decade ago. It was the most visceral and pure experience of descending into the occult which transformed me into something beyond the confines of anything I thought was humanly possible. I had attempted to write of this many times and was never able to fully articulate these experiences until now. The work was not over and it was only until writing for this compendium that I was able to fully comprehend what had occurred and continues to manifest. Abaddon’s magick opened the gateway for the ultimate rebirth into spiritual strength through my own incorporeal death.

A book composed of several magickians’ views of the same spirit is an awesome concept and I am excited to be a part of it. Abaddon has pushed me to better myself when I was complacent and protected me from horrors most magickians don’t believe exist. It is my pleasure to present hardcore knowledge and a working ritual praxis that will lead other magickians towards a rewarding experience with this wonderful demonic god.

Enoch B. Petrucelly, author of The Black Witch:

I have always enjoyed Abaddon’s presence and warrior-like energy since the beginning of my time working with him as one of the entities that I would conjure to hold the space in my temple. His warrior-like energy gave me confidence that my enemies could not and would not dare to try to interfere in my Magick and Rites. When E.A. Koetting asked me to participate in his Compendium during a podcast that we did together, I jumped at the opportunity enthusiastically. I had had a good amount of experience enjoying the powers of Hades in my life, who is another manifestation of the Destroyer God Abaddon. Hades being a Lord of the Dead gave me some solid gnosis and rites to contribute to the Compendium that I just had to share with the world!

Abaddon has always interested me, so when the offer to collaborate on this project, I immediately jumped on it. Like most people, I was familiar with Abaddon through the Christian lens, but that was about it. Working on this book gave me the chance to do some further exploration.
Being familiar with Thelema, I was also familiar with the concept of the Beast from that system, which added to my curiosity, and it was a true joy to intertwine the two into my essay included in here. Since I had very little experience with Abaddon (even though the interest was strong), I more or less went into this like a blank slate. Because of this, I found some connections that I have not seen people discuss before, and it is my joy to share them with you in my essay.

E.A. Koetting – The Grimoire Of Abaddon

Here’s The Angel Of The Bottomless Pit’s Ultimate Grimoire Of Necromantic Sorcery, Baneful Magick & Binding Spells… Learn To Harness The Unlimited Power Of Dark Goddess Kali In Her Most Lawless Form, And Find Out Why E.A. Evoked & Cursed The Archangels To Their Faces — A MUST READ

What’s being summoned, what’s being created here is the manifestation of the Father, The Lord of Darkness, manifested in physical form as the Prince of Darkness, called by prophecy the Antichrist.
This is not Satan. This is older than Amaymon. It is even older, greater, deeper than Abaddon, the Lord of Darkness.
This is a force, an entity, a Supreme Being that I’ve learned to call The Father when speaking casually. When I’m speaking ceremonially, when I’m speaking ritually, when I’m speaking in the magickal tongue, this is a being that I refer to as Satolas. — p.58

I was not merely issuing threats, but I armed every statement with fixed intent and magickal Will, arming the words as weapons, curses laid against the Archangel.
The angel suffocated the moment that his sigil touched the Elixir, and every word I spoke cemented his torment.
“Uriel, this is but the Sword of my Ancestors,” I informed him. “It is but a symbol. There is another sword that I have, another sword that I hold. I myself am the Sword of Azazel!” — p.69

This is the process of the creation of the Devil’s Idol. Once complete, it will no longer be a human skull, but it will be the Devil’s Skull, a direct link to the Lord of Darkness, whose eyes will burn red in the empty sockets, whose voice will be heard from the cracked teeth, whose dark power will radiate from within the bones. — p.129

Get Your “PhD In Demonology” With This Academic Masterclass In The Arcane Historical Origins Of Abaddon… Discover The REAL Truth About His Deific Incarnations As Mot In Canaan, Apollo In Greece, And His Connexions To The Qliphoth, Locust Demons & Hell Realms

After the Attainment and Illumination of your Daemon, if it is your Will, the journey and crossing of the Abyss will occur; often a shocking and terrifying experience in which the essence of the individual is revealed and only the strength and will of the Luciferian can master this darkness and chaos. — p.141

The Luciferian must embrace the demonic not as merely a destroying force, not even “evil” beyond chosen aims; the demonic forms all are grounded in specific types of energies and associations the Deific Mask represents. A horned devil, winged as a bat, a body green and black with grotesque mockeries of animals and reptiles, the claws and talons of a bird of prey all have hidden meaning. — p.146

Luciferians reject the cosmology of the Hebrew god, finding that the Qliphoth in a Hermetic sense is the key to the theurgic balance of the Adversary as defined in various ancient pantheons containing the origins of Qliphothic demons and fallen angels. — p.153

An Occult Survey Of The Demonology Behind Abaddon That Reveals The Powerful Connexions Between The “Great Beast” Megatherium, “The Shadow” From Dr. Carl Jung & H.P. Lovecraft’s “Dweller On The Threshold”

Access A Painstakingly Comprehensive Reference Work On The Dark Angel Abaddon And His Magick Correspondences… Learn To Perform 19 Demonic Invocations, Sphereworkings & Rites To Awaken Your Deification

7. Enoch B. Petrucelly – Hades: Crossing The Abyss Into Non-Being

A High-Powered Grimoire On Hades The Greek God Of Death Along With His Magick Connexions, Sigil, And Evocation Ritual… Undertake The Initiation Rite Of Crossing The Abyss To Access The Underworld Also Known As “The Void” And “Universe B”

So edgy. But cool I guess.

Ordered and now i wait(;

Yeah, same here. Hope it gets here soon…Though it doesn’t really matter as I’ve barely delved into the Lucifer book…Too much on the list

Looking forward to having a read.

Hello! I’m sorry to ask, but what’s that sign on the cover? Today I accidentally saw it on the website, and remembered that this sign was seen in the dream. Anb the letter “B” was still there.

Just got the book, started reading, and am looking forward to diving in to the ritual work. Awesome authors to look forward to… I’m in the introduction at the moment. I’ve worked through each of the gatekeeper grimoires, all of which are excellent compendiums, but I feel like Timothy always starts them off talking shit and/or making questionable generalizations about things like yoga (in the Lucifer compendium; yoga saved my life and has profoundly enhanced the spiritual evolution of countless others, by the way), LHP/RHP distinctions that are based more on something Nietzsche said and anarchist political views than on an objective evaluation of the internal diversity within either of those causal categories, and theism of any kind (Satan forbid that anyone interact with any non-physical entity as a powerful living being worthy of respect as such). A Christian anarchist (yes, they exist) or a Satanic fascist (they definitely exist, too) would overturn the validity of the highly dualistic table on page 21. I even like Nietzsche and tend to agree with anarchist ideals, but the way things like mysticism and belief in divinity/absolute being (oṃ namaḥ śivāya, Śaiva Tantra being the source of the term “left hand path”) are inaccurately glossed and prematurely dismissed (as though there were no experiential gnosis or tangible benefits/evidence resulting from contemplative practice to support such beliefs) made me want to comment. Ave Dominus Abaddon.

Maybie you need to work with Abbadon

Hey when are y’all gonna release this on amazon paper back and Kindle unlimited?