So I am gonna discuss a few visions I had in the past about a specific entity and discuss who or what they may be.

About a year back when I was doing general research and exploring demonology for a project I was doing for a university course on horror, I recieved a rather vivid and at the time unsettling vision of a unbelievably tall entity wearing white and silver armor.

The entity was damn near fifteen feet tall and had this sort of helmet on that had plenty of engraved grooves and symbols that looked occult in nature. The guy was completely robbed of his sight thanks to the helmet and an old, thorny halo that looks like it was crafted ages ago but has since fallen into disrepair was behind their head. The helmet itself seemed to cover the entire head and encase it in some metal that looked like silver, steel or iron. The rest of the body was donned in battle worn robes and armor, a sword attached to their hip.

The entity was deathly silent and only motioned towards me in the first vision. Reaching out as if saying to take his hand before that particular vision ended.

The next two are of a similar ilk, the entity appeared in a pitch black place and gestured to certain objects or areas for me to gaze upon. One was a lucerne hammer that seemed to match its armor set. (A lucerne hammer is a pole arm that is nearly seven feet long and is a cross type weapon that is a spear, war pick and war hammer all in one. Its probably one of the most versatile weapons of that era).

Another vision had me standing with him while he held said lucerne hammer and merely pointing with it to a sun blasted landscape overshadowed by a blackish red sun that shined irridescently with very chaotic and dark energy. He pointed at a absolutely massive withered tree which was fed by many rivers and surrounded by what looked like piles of mangled corpses. (I interpreted this as a representation of those who failed the trials needed to make full contact with what I assumed to be the tree of death).

The last real notable time was when I saw his face. The guy was young yet appeared to be in his fifties. His hair was white, eyes glowing a sickly yellow which seemed to burn like a raging fire. His face was stern, littered with a few scars and carried a sort of no BS feel.

I have my suspicions of what this being could be but I am not sure. Part of me thinks he’s a possible representation for Abaddon since I have seen similar descriptions of him, and because of the heavy discordian warlord vibes I got from the guy along with the oppressing power and presence of the being. Another guess of mine is that could have been death incarnate. But he could easily be a representation of someone else. Do any of you have any possible idea on who this figure may be?

I will include a sketch I made of him below. Though his appearance was eventually adapted into a project I did later on which I got a near flawless grade on.

One thing to note is the appearance used in the image was made after my first short glimpse at him. He has more armor on him than robes, notably phoenix/draconian pauldrons, carved out to look like these beasts. He dons a equally engraved chest plate, and more armored portions around his waist. Normally he also only has two arms, but the other four appear as ethereal/energy based but these are almost never shown. But this is the only accurate image I have drawn or seen so far.

Any help in brainstorming here would be greatly appreciated I have been looking for a while and not a lot matches. 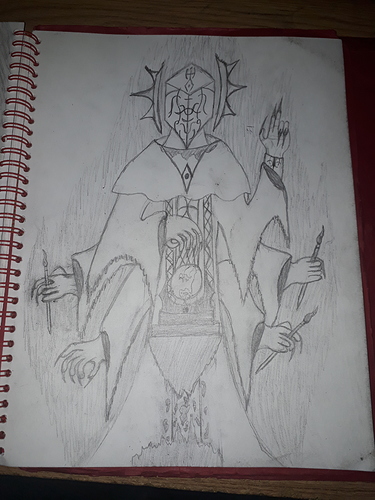