How Lenormand cards made me a tarot reader
When I thought about doing card readings, I wanted to learn how to read Lenormand-Cards. I found it fascinating, that cards could give so much insight and advice. So I bought a nice deck and - I don’t know why - but during the order process I also bought a Tarot-deck, although I didn’t even really know anything about it.

When I got the cards I started to learn how to read the Lenormand cards.
At first I tried to do some readings for me and family members. After a while, I wanted to test my abilities - but I was afraid to do readings for other people as I always thought they would tell me I got it all wrong.

I doubted my abilities and didn’t want to tell people false things. But then, at some point, I finally tried and opened a thread on another forum. I wrote that I wanted to practice and if someone was interested. Lots of people were.
At first I was so nervous as soon as I hit the “send” button - but, to my surprise, I only got good feedback! The people told me I was correct and were so thankful and happy about my readings. I couldn’t believe it.
At first I thought it could be coincidence but after a while I thought that I was better then I thought, maybe.

Also, I have a very beautiful Lenormand deck and I know more beautiful ones exist.
But I think, card reading really has a lot to do with connection and the feeling for the cards.

Well, enough story time for today.
I hope all of you are doing well! 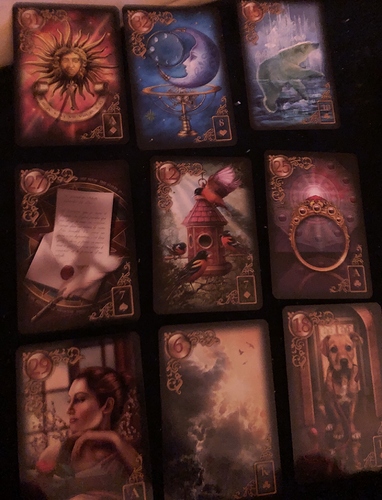 I always loved tarot. Thanks for sharing your story.

Thank you for reading it

I did a whole lot of readings today. Was very exhausting but also a good time.

A lot of people have a lot of trust in the reader when they ask for a reading and I think every reader also has a responsibility.

I always try to chose the right words for example.

I saw lots of readers, but mostly on other forums, that did readings for other people in public and they were so rude! It hurt me to read it although the reading wasn’t even for me.

Lots of people go trough different kinds of pain when they ask for a reading. I think it’s important to be honest but there are different ways to tell the truth! You can choose your words!

Also, nothing is always only negative. I always try to find and add positive aspects or advice, even when I don’t get the answers the other person might want to hear or wished for.

I also keep my readings confidential.

I also saw readers using their knowledge about specific persons (from readings) in public against them. That’s unbelievable in my opinion!

But well, I think not every reader has the same attitude.

It’s not easy to find a good reader.

Fortunately I also met some really good readers in this forum

Thanks Lunis, and your a damn good Tarot reader too.

you are blessed my friend

It was a really nice, sunny day and I went to work. We had a meeting today and sat outside in a garden.

After a few hours, I wasn’t at work anymore, I felt completely exhausted!

At first I thought it was because I didn’t sleep much last night but then my head startet to feel really really hot! I was worried that I had a fever but I hadn’t.

My eyes hurt, my head hurt, my neck hurt, I felt dizzy, my head was hot and completely red!

So I realized… that I have a sunstroke! Damn!
Fortunately, it didn’t get worse. I cooled my head with cool washcloth for hours.

It’s still not gone but I am feeling better now.

So… sorry if I didn’t answer your messages yet. My inbox is super full and I was knocked out today

But no worries, I’ll be fine

Some people send me messages every day if I haven’t replied to them yet for a reading.
They ask when I will read for them, if I could do it today etc.
Even when I tell them, that I need some time or other people asked first, they ask me every day again if they will get their reading today.

I work full time - or even more - and I have a private life!

I won’t answer people anymore that don’t respect my private life at all. Messages will go right into my archive.
I am doing this for free and it takes time and energy.

Sorry for this unkind message but I had to say it one time.

I do reply as soon as I have time.
When I didn’t get back to you for a week or so, of course you can ask, but if I already told you that I need a few days, it’s the truth.

As so many people wait for a reading, I am working on a group reading to make waiting time a little shorter maybe.

I am almost done - just feeling so exhausted at the moment and need a short break.

I hope it will resonate.

You’re not unkind, Lunia. Don’t worry about it. I know how you feel, sometimes you need to put boundaries in place. Readings do take energy, quite a bit of it depending on what the person is seeking. Put yourself first when you need to

I felt so exhausted today somehow. I woke up, did nothing really and fell asleep again. Lol

I got good feedback so far on my pick a card-reading, which is great. It was the first time I did a group reading and I am glad that lots of people find it accurate and helpful

It was lots of work

So I am happy it was not for nothing.

[image] You seem to be at a point at the moment where you feel the need to take decisions. Whether you want to stay in a current situation or not, especially when it comes to a relationship as it seems to me. For some of you there will be breakup, others want to get closer. But it’s on you to chose your way. Getting fire and earth energy, also maybe some water signs. Some of you might be concerned about an Aries. You work a lot at the moment. Could be in your job or on something like your r…

I had an interesting experience some days ago.

Lots of times I went to a specific area during the last weeks, I saw a single deer. It even jumped in front of my car sometimes. I tried to take a photo of it but it always ran away before I could get my picture.

A few days ago, I got a message from a specific person. I still don’t really how what to think about it yet… but the same night, I saw two deers together right in front of me! It was the first time I saw two of them…

Maybe it means something.
I hope so. 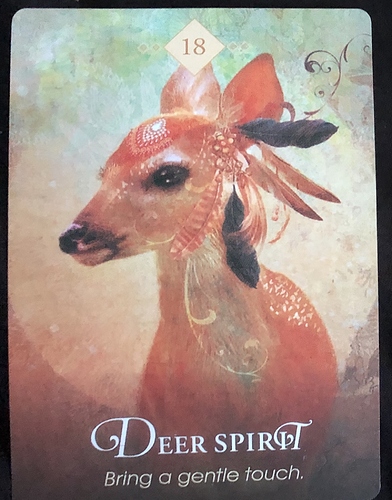 Last night I had a dream.
Usally I can’t remember my dreams but that one felt so real. A wish I have came true in that dream. When I woke up I felt unsettled but not really in a bad way. It was like an excitement that I knew my dream would come true.

I asked my spirits for some advice. 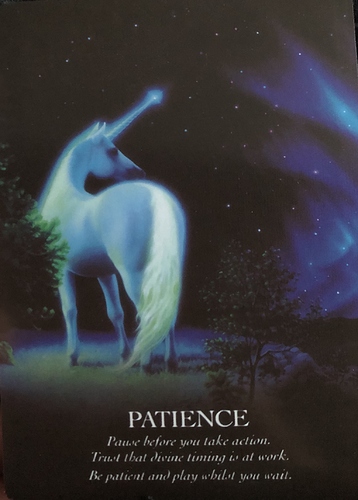 The last days were kind of busy and exhausting but not in a bad way. I had a lot of work to do, at home and at my job.

I saw a shooting star tonight. It’s pretty uncommon to see it in the city so that might have been a sign. Maybe a wish will come true

Would be so nice. 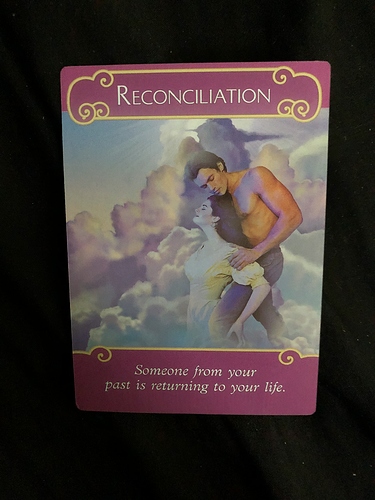 My favorite time to do readings is when I feel REALLY connected.

Usually people tell me my readings are really accurate but it’s not the case that I feel the connection to the cards and the things they want to tell me in the same way every time I do a reading.

Most of the time it’s just this “usual” feeling I have during readings. Sometimes I even feel I don’t get a connection and then I wait a little and try again later.

But sometimes… I really FEEL the connection deeply. I look at the cards and I don’t even really have to think - everything just makes sense so easily. It’s like the cards fell the story and you read it like you are reading a book - without complicated twists. The cards fit together perfectly and when you look at them you just know what’s going on and why they appeared together.

And that’s the time when I mostly enjoy reading. I don’t have an influence on when it happens as it seems. But I am always glad to notice it and it makes me do lots of readings in a row because it’s so much fun in this moments

I wonder if other readers know this experience

I don’t want to go into many details here but a lot was going on. At least I got to do some readings on the forum

I just noticed that I didn’t write in this journal for more then two weeks so I wanted to leave a short post.

I was on different sites and I found sooo many beautiful decks. Oracle and tarot. Can’t decide which ones I should get

I was also thinking about trying to create an own oracle deck just for fun.
Not sure yet.

I hope this finds you well.

I learned something new during the last weeks.
I won’t be the first person to start anymore in a tradings, when people ask me for a trader „really need a quick answer“.
I did many readings now where I never got the promised trade.
It really makes me think, if offering so many readings is even worth the effort.

The last days were really hot. Today is a little bit cooler as it rained a lot yesterday. It’s also windy today, I can see the leaves shaking in front of my window.