It’s a little white cat with golden eyes and a gold coin on her forehead, like that of a Japanese Maneki Neko. I’m not particularly creative with names and just named her “Mrs. Cashine” because what the hell.

One basically calls upon her by imagining the scent of cinnamon and reciting her name 3 times.

Anyways, I didn’t see any results at all and decided to feed her with my emotions to further strengthen this fairly young servitor. I generally don’t expect anything in particular from her. Instead, I kinda let her be creative with her work.

This is her sigil: 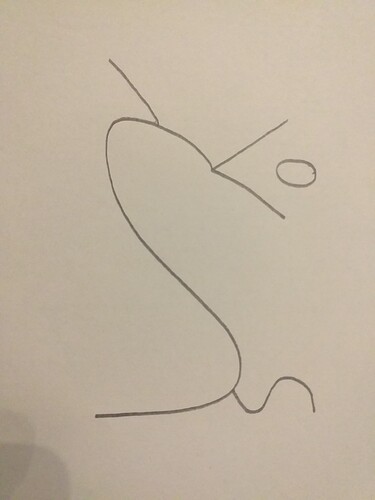 I do have a private shop on eBay, unrelated to the occult, which serves the sole purpose of selling unwanted stuff. Nothing profitable, really. It’s just a way to get rid of clutter.

I went onto that website, just like any other day, to check if any of my listings were sold (just in case) and no, nothing was sold.
Now, there was a small device in my mind, that I wanted to buy and it was available on eBay. So I put it into my cart and proceeded to check out. On the checkout page, I saw that I apparently had so-called credits left.

These credits were accumulated over a long period of time as a result of my sales activity on the site, as well as my buying activity. Basically eBay’s way of giving back.
Now, these credits are really slow to acquire BUT because I hadn’t noticed them before, they piled up to an amount just shy of $26. They cannot be transferred to a bank tho. They stay on eBay forever.

The thing I wanted to buy cost $12 and so I was basically able to just deduct that from my in-site credits and spend a grand total of $0.00 for what I bought.

Never in my wildest dreams would I have considered this a path to money. My servitor really did bring me money from an unexpected place and for that, I thank Mrs. Cashine.

That’s really cool. One time I created a servitor to increase my success with artwork. Within about a week someone saw my drawings, asked me to do his portrait, and offered to pay me for it. Servitors really do work.