I felt as if I had to, after a terrifying episode of bloodshed from my uterus, puddling over the floor and over my clothes, I simply had to collect my blood. I knew I was having my period, but it was different this time and extremely heavier than normal. Chunky clots came out the size of my finger. I collected my blood, placed my son to sleep. And thought to examine it over the triple goddess altar cloth.

Before I made up my mind to do this. I had a brief visual imagination of myself in the bathroom. I played in my own blood, beautifully, seductively. Then I began to see myself falling into the drop of blood within my hand. I fell into the crimson color and saw myself masturbating in the bathtub with blood inside, my whole body was covered in my period. I came so hard that I convulsed and a kundalini boa constrictor serpent came out of my womb and slithered over my thighs, over my waist and coiled over me, above me. Then I saw myself coming out of the dark pool of blood and into a different dark realm. The moon was full up in the night sky. I saw a women who might’ve been Lilith staring down at me.

I lighted two candles. One black and the other red. I placed my blood in a glass cup before me. I let myself go into my meditation, deep into my blood. I saw my own blood, a red dot in my mind’s eye. I examined it with microscopic vision, it swooshed and swished with such pure vigor and ecstasy, dancing ribbons flowing and spreading, then weaving back its bloody threads into one clotted dot of blood. It was as if you could take a drop of blood in water and it dance as it seperates. I saw my blood dancing now, shapeshifting, splitting into two, then rejoining once again like lovers. I then saw Heylel in a science lab, wearing a white lab jacket, peering down into the microscope. He shushed me, because he was the one examining my blood. We both went back into my blood, then something happened. I fall into the red dot. I am somewhere else now. I am confined into a pyschic ward wearing a strapped jacket. I writhed to be let go and taken out. The room was changing, coming alive. Blood was pouring down from the dark ceiling above me, the walls were covered with living meaty flesh. There was so much bloodshed everywhere. The door was also made of flesh, it looked like a placenta. I was still strapped, and fell to then floor with a voice saying,

“You are confined within yourself.”

I look to a dark corner of the room, a giant humansized tarantula was peering at me. I also saw a caduceus above its head. I continued to see the caduceus for a while now and have been recieving visions of the caduceus previously in last meditations. It grew dark in that same corner, the eyes of the tarantula were like obsidian sheen. The spider was taken then and a warped door took me inside. I saw the palms of my hands with tears of blood falling from the sky. I was in a field somewhere. It was raining scarlet blood tears. My dress was white, but was soiled in blood. My hair wet and stucked to my skin. I saw Lilith come before me. I saw a wild red phoenix in her hair. I thought it was cool that melek taus is the peacock and Lilith the fiery phoenix. She looked like me . Except my eyes glowed red and I was naked and taller. She was beautiful and wise. Her stance was authoritative, but peaceful to be in. She smiled at me. I had a thought and suddenly she said,

“Even all flithy things belong to me.”

I can’t remember what else, other than I felt I had to use the blood in the glass cup and put in my third eye. So I did. I felt warm tingly around my body, but that was all. I remember also seeing a dragon’s eye looking at me, it almost looked like Sauron’s eye, but the irises were thinner. I asked Lilith what the caduceus means, she replied to me haughtily,

“What do you think?”

Both of them had taught me what I can do with my own blood. It was filled with raw magick power. They instructed me to use it over my third eye, to paint with it on water color paper, to put over my body and rub over other areas of my body as well.

According to many rose sister schools, they honor the goddess by their menstrual blood as offerings in different forms. Its a form of ancient practice to use the menstrual blood for magickal purposes and a way to honor the divine Feminine. 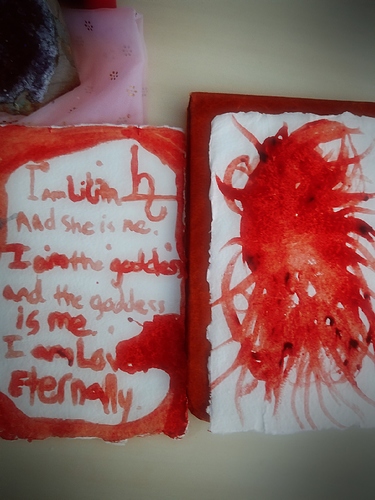 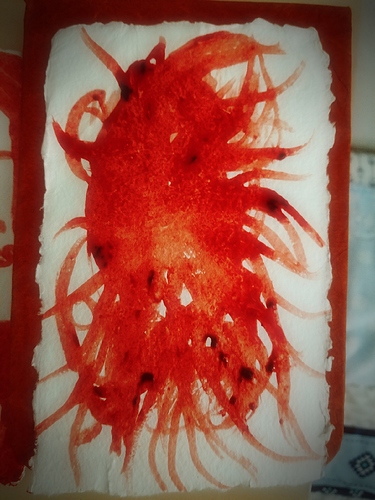 This was such a healing experience! My heart felt like it was being squeezed by a beautiful energy. I felt as if I released something inside myself. Anyways, I felt as if I had to share this, because of our societal views about periods have been so misconstrued.

Thats good to know! Yes it was beautiful to paint with it.

I can’t find the right words to express what I feel about this, so I’ll just nod in approval with a discrete but solid smile.

What you have captured in your intensely interesting piece is somehow familiar to me.

The best I can say is that is extremely interesting.

I hope it brings you immense power.

It has been interesting and educational. Thank you, love

What is familiar, how and in what way? Whenever I stumble across a something new like this, it feels familiar to me as if these were ancient rituals performed many thousands of years ago and I was there in that lifetime doing them. Or when I meet a deity, he feels familiar as if Ive known them eternally.

It is an intimately evocative piece. A glimpse into something sacredly veiled in many respects, something provocatively primal and hauntingly familiar. It is reminiscent of the best of Jordan Eagles and Vincent Castiglia. Very courageous in it’s bare honesty and you are very gracious in your desire to share. Thanks you!

Yes, from now on it will be a sacred practice. Our tribal and primal power is stored within all of us, waiting to come out. Thank you, love

There is nothing but power within the blood. It pours forth coating our skin and we should gather it and use it lest it and its power go to waste.

Interesting! I’ve been collecting my period blood with a menstrual cup but this never crossed my mind. Thank you for sharing. Think I’ll have to try this.