Hi all…so, a week or so ago I performed a Pendulum ritual to determine who my Guardian (companion) Demon(s) is/are. After the ritual, it seemed clear that both Malphas and Belial are my guardian’s. As a side note, it seemed King Paimon wanted nothing to do with the ritual at all, as he was the only spirit not to participate. Anyhow, I know very little about Belial and had never even heard of or read about Malphas. After researching both I felt way more comfortable starting out working with Malphas, as it seems like Belial may be a bit too “hardcore” for me at this stage in my progress. So, I drew up Malphas’ sigil and have been charging/meditating on it daily, to maybe get a little more familiar with it.

Yesterday, while looking out of my office window, I noticed a large black bird soaring high above the office. To big to be a crow, I think, but didn’t look exactly like a raven either. However, I’m no ornithologist so It could’a been a baby pterodactyl for all I know

I went outside and watched it for a couple of minutes, went back inside and immediately received a text from an estranged business partner inquiring about a potential future deal. Coincidence or not, I figured this was as good a time as any to work a proper evocation.

At home, after sundown, I set my table up to perform the Simple Demonic Evocation that @Lady_Eva had shared. I also plugged my headphones into my iphone and listened to the Song Of Malphas (from the 72 Songs of Solomon created and shared by @deathreeper on this site). The music was kinda creepy, but I enjoyed the vibe that it gave me. After that song was over, I turned the music tab off, locked the phone screen, silenced the phone (so as no distractions) and attempted to mediate into as deep of a trance state as possible. After 15 minutes or so, I started to perform the ritual reaching out my right hand and calling on Malphas to come to me three times, as per the instructions. I then started to chant the enn and after a bit chanted the enn while gazing at/charging the sigil. After this went on for a bit, I attempted to visualize a horned figure/giant bird thing in front of me. For some reason, I had an extremely difficult time visualizing the figure in front of me. I continued to carry on, chanting the enn and focusing more on the sigil since I was having trouble with the visualized figure. I then lit a 4" diameter candle that has been burning poorly (didn’t want to fool with it cause it always goes out, but it’s the only one I had) and lit some incense. Within 30 seconds or so the candle went out…then

The phone suddenly turned on, playing the Malphas Song and the candle literally exploded into flames. The energy when that happend almost knocked me out of my chair. I mean it scared the piss out of me. Startled me so much that I don’t know if it was major energy or my shocked body going into “fight or flight”. Really, my body has never vibrated that intensely. I settled myself down, while the music still played and the candle just blazing, and concentrated again on the sigil and the enn chanting. Still not able to really visualize a figure but because of the way the candle was burning, the sigil was flashing crazy. I could see it flashing up in the air, I could see it flashing when I closed my eyes.

I then welcomed Malphas, thanked him for coming and introduced myself as one he is supposedly a guardian over. I only asked that he guide me, protect me, teach me and put me on the path of growth and knowledge, to maximize my potential as a human here on the physical world as well as a being on the other planes. Like I’ve mentioned before, I’m horrible at hearing, seeing, noticing things…so I attempted to play out a conversation with him in my mind. After a bit, the music stopped playing, I blew out the massive flame on my table and bid him depart in peace if he wished, but I hoped that he would always be near. Then I closed out the ritual by performing a simple uncrossing/banishing.

So, I’m pretty dense when it comes to sensing a change in energies, or really noticing anything…but I can’t not notice this. Maybe it’s coincidental, maybe there is a perfectly rational reason as to why the phone and candle acted as they did, but I hope that Malphas was there and that I can start to learn more about him, about myself and about this journey that I’ve just begun.

Sorry for being wordy, I just get excited sometimes and I like to communicate…and I always welcome advice and insight from anyone willing to offer it.

This is really awesome, you put time and thought into how to do this, and appear to have got a result that was also intended to leave you in no doubt that you made contact.

Thank you @Lady_Eva, for both your encouraging words and all of your helpful insights on this forum! I truly appreciate your knowledge, ranging from demonic evocations to the Kybalion…neither of which I knew anything about prior to stumbling upon this site a few months ago. 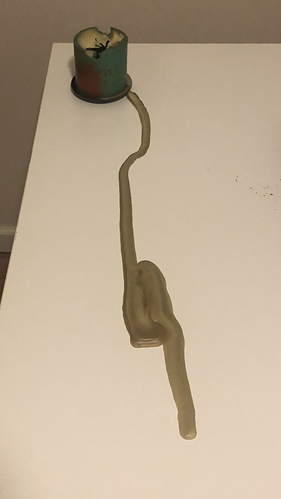 Above, a pic of the candle

that literally exploded to life after being totally snuffed, and the trail of wax it created