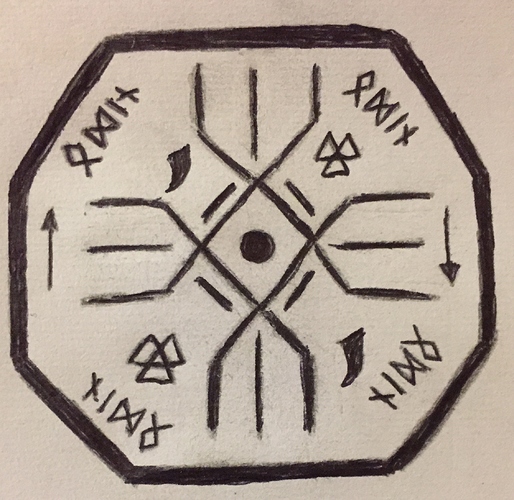 Above is the sigil I created for Odin the allfather.

Credits to Asbjorn Torovol, I have used his eye of Odin from my experience it’s like a vortex that pulls the essence of Odin.

Also I have placed two mead horns and two valknuts that consist of three interlocked triangles, that is attributed to Odin among other things.

On the right and left I have placed two spears on each side, the spear is the actual preferred weapon
Of Odin, to me this shows his nature of being the father of battle.

In each four quarters I have written Odin’s name in runes and placed this symbol in the octagon, spirits have revealed to me that the octagon, works like the triangle of manifestation, except it doesn’t constrain spirits it empowers its manifestation.

The sigil works extremely well, just thought it would be cool to share this with you all.

I have created a new and improved version of this sigil it’s below. 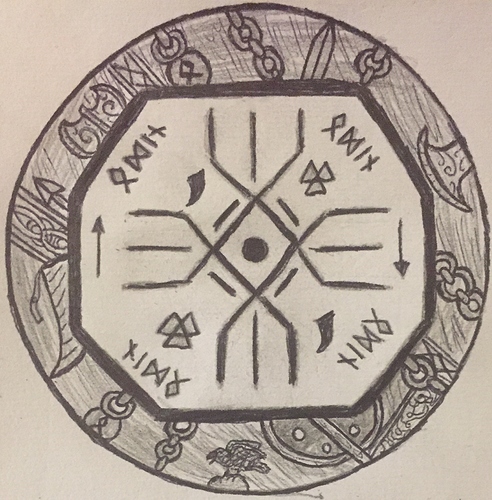 Inside the circle I have created some Norse Viking artist theme with a mead horn, axes, sword and a spear along with metal chains a shield, a black raven and Celtic / Norse patterns.

Thanks dude, sounds great for a tattoo, on the spear head you could have runes or a symbol that represents Odin.

Have you ever worked with hiemdall or loki

Did you ever talk to that acient serpent again?

Yes but I have been sworn to secrecy until he gives me permission to share his teachings.

So beautiful, thanks for sharing.

I love it brother, you have done it justice.

I am glad the symbol was useful to you.

This is exactly what I want folks to do with my work, take it as it is and then make it their own.

You sir have followed Stay True & Stay Awesome exactly as I wish people wood. 10/10 from me.

so the serpent you discovered was from the viking pantheon.

i was under the impression it was from something different and female?

though i know the vikings do have a serpent.

No it wasn’t apart of the Viking / Norse pantheon.