So I consecrated a candle to be the blackened fire of zohak, and for the past two days I’ve been having some really weird shit happen.

Yesterday my computer just randomly turned itself on out of nowhere. No big deal, whatever. Then when my partner was showing me a picture, we put it on the counter for a second and it switched to a different image. I went to lay down in my bed and there was a single grain of rice in it (I haven’t eaten rice at home for weeks).

Today when I got home, I laid down on my bed and there was a kinda moist mass on my bed and when I began gazing into the candle flame my computer, once again, turned itself on.

What the fuck is going on

Anyways, thanks for reading my ravings,
Cheers,
King

This is the mass I found: 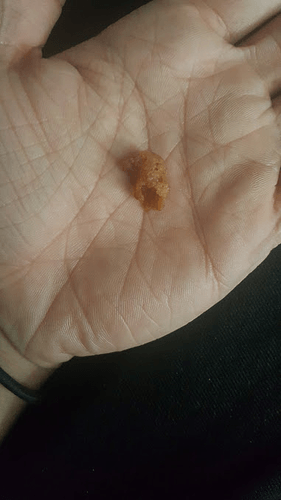 A being such as Zohak does have intense energies plus he is the storm fiend, the storms have similar energies to electricity, so I guess electrical equipment would bug out around him.

Even I experienced this with him once while I drew his sigil on a candle.

This sounds like the energies of your divine self are tryin to get your attention. You have to remember the blackened fire of zohak is a spirit vessel for your own spirit.

I’m just going to use this to document shit that happens.

So last night I fell asleep before I got the opportunity to perform the Ignition of the Black Sun.

I woke up at 6am sharp with my blackened fire burning extremely bright in my face (I left it on my nightstand as I don’t have an altar) and I heard the name Ahriman being whispered to me repeatedly while I awoke. I blew out the candle and fell back asleep. I awoke some time later to find the candle had reignited itself, to which I blew it out again and rolled over to sleep.

What have I started

I bet you are loving this, I would. Good Job brother. Good Luck on your initiation.

The ride has only begun. This is going to be great.

You went and tapped your inner god and devil on the shoulders and went “Teach me!” Lol and it listened

prepare for an interesting ride.

Found another piece of rice.

Found another piece of rice.

Maybe they are influenced by your inner weeb?

not a weeb, far from it actually, but thanks

Finally got a set of robes, so I decided to consecrate them and do the exercises I haven’t been doing for the past few days.

Consecrated my robes then began with raising DoMar and DeHak with the robes on. Nothing spectacular.

Moved to Emanating the Black Sun. Did it twice to be sure and felt a welling of immense power. That was new.

Gazed into Drugskan and I began seeing the Blackened Fire of the walls and everything around me. Another new thing, especially considering I haven’t been keeping up with my practice for a few days.

Finally, I Called the Divs from Arezura, something I’ve never done before. I did it partially incorrectly, as I haven’t had time to familiarize myself with it. That being said the whole time I felt an immense well of energy and power.

After I ended it and closed my rites I felt like my head was swimming and I began seeing extended shadows on things around the house and could have sworn I saw another face on my own. My blackened fire candle has been freaking out ever since I did so.

wayy up. I started with a combination of the foundation exercises but the very next week my work load shifted to where i would have enough mental energy for maybe 1.

What happened more was i would start by perring into drugaskan get into trace and then pass the hell out before i finished the exercise. Had to back it dowb a bit with time constrains and i gotta stil get sleep lol.

But i’ll be able to get back to practice daily without distractions before the end of next month if all goea well.

And my favourite fucking part; something went after my partner when I left for work. I’ll fucking burn everything alive (or (un)dead) if it fucks with my partner.

Hmm if this started up right after you dived into practice it may just be the manifestation of the energies you raised. Kurtis mentions a similar result in the book. Cant remember which chapter but its one of the earlier ones.

I’ll give the book a reread… Been needing to anyways…

I dont care about the poltergeist shit. Makes me know its working. Just nothing fucks with my partner.

Yeah the forces in this current make themselves know FAST. The amount of shifts that have happened since i started, my roommates and girlfriend have all had at least one interesting event that they where left going. “What the fuuuuuuck was THAT!”