Hello there , A few minutes ago ,I have already introduced myself.
So here is the eperience:-
A VERY INTENSE EXPERIENCE WITH LORD ASMODEUS.
Just a few minutes ago , I activated 6 sigils of lord asmodeus simultaneously by putting hardly a drop of blood on each, while chanting the enn 3 times each while touching the sigil with the blood drop.
NOW, the next thing that happened was extremely intense af.
Immediately I felt extreme nausea , like I wouldn’t be able to handle the very intense energy of lord asmodeus.
(WHILE doing this lord asmodeus telepathically communicated saying what was the need of doing this much son?.
Your body isn’t able to handle such intense energy.)
And yes , it was too intense for me as a beginner to activate 6 sigils of lord asmodeus in a span of 1 minute.
OTHER effects I felt was
1.a very hot feeling on my face
2.I started sweating profusely within a couple of seconds(as if did very heavy workout.)
3.I am also wearing ruby gemstone ,So there is a possibility that lord asmodeus’s energy might have affected the gemstone.

Also ,I would like to add that ,the sigils were same ,none differed from each other.
The sigils were printed on a single sheet of paper ,6 sigils on it.

Also,while I was putting the drop of blood on each of them ,on the 5th sigil as I was about to do,I felt like if I didn’t controlled myself at that moment ,I would have thrown up(vomit).

ALL of this happened within a span of like a minute(I was quick to put the blood drop on each of them).

I am a beginner anyways,my body was not able to handle such intense energy.
So, what do you think about this experience?
Did you do anything similar to this?
I learnt my lesson the hard way(Kind of foolish act on my part),and at that moment I experienced the power of lord asmodeus.
I will also be posting the image of the sigil of lord asmodeus from Ppt slide. 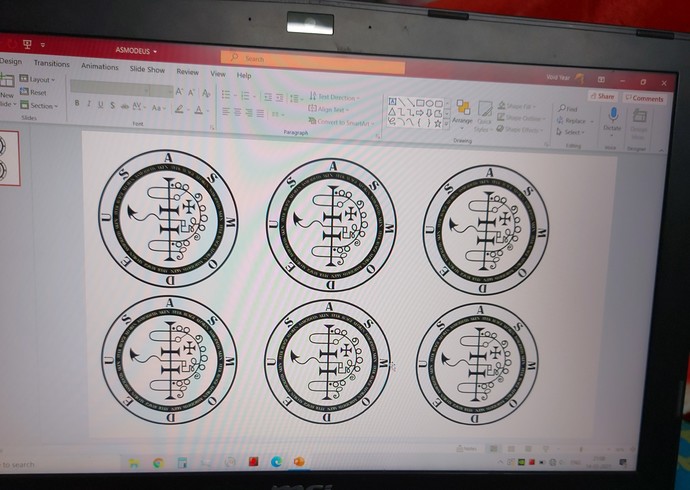 It happens when you encounter a significant amount of energy you haven’t adjusted to. Could be you just react more than some. I typically don’t have reactions to them after the first encounter, but your symptoms will be your own, even if they are similar to others. I wouldn’t place much in what they were or were they were.

One sigil or six, doesn’t matter. It’s the same energy behind it. But you may focus more on it due to concentrating on it longer than you normally would (six times, essentially).

Thank you for your reply.

No worries. It still happens to me and I am in ritual most days of the week. Recently, I started working with Azrael, Santa Muerte, and Az Jahi. I had a visceral reaction to each of them when I first met them.

Sometimes this will happen when I first invoke a spirit, too, but feels differently than that. By invocation (since there are several styles), I mean bringing them inside, not just their energy.