I just got back from doing the offering for may 10th. I used chalk to draw the symbols on concrete in a deserted parking lot. I made a bowl like in E.as video. I write tge stmbols with a pentagram in the bowl with the names of the people i need to get out of the way. I burned charcoal disc in a little bowl in the big bowl. I took red wine and poured ur in rhe bowl as an offering. I then took my petition of what I wanted burbed it and placed ut in the bowl. Im thinking of using the bowl in my evocations and doing the same for a better effect. I did a reading on my self and it it was very good. Just wanted to what others have to say about their experiences.

I don’t want to say too much about what I did but I felt the power of Saturn and definitely felt and saw the presence of the entities I called and followed their instruction.
I believe great changes are on the way for me.

Oh and I’m not done yet…still got some things to do in doors.

Musta_Krackish what did Saturn feel like to you? It felt very heavy and almost suffocating to me.

From Europe, I was probably one of the first to open this ritual yesterday with my Universal Circle.
One hour of meditation in the forest, and offering a looot of incense to Saturn, Samael and Al Uzza.
Had some powerfull dreams after that, I woke up without being able to know if few things of my past have taken place as in the dream I just had, or in another way that I wasn’t able to remember.
HIGHLY POWERFULL NIGHT, I hoppe that E.A will give us some details soon, but the power was deffinitly there.

It felt very heavy to me as well (Saturn) like the planet itself was right above me.
Not suffocating though.
The presence felt heavy but the energy was pure darkness and light at the same time.And also full of knowledge.
Hard to explain.

Well I called upon a really powerful aspect of Saturn.

I don’t really want to talk about what I opened up, because this working has some particulars to it that I’d prefer to keep secret for a dozen reasons.

I felt like there was a lot of power, and my incense was definitely wafting around all weird, and there were other things around. I feel like I have a very definite sense of calm afterwards. There were particular aspects of dealing with what I summoned, that left me a little “shaken”, but that seemed to pass afterward.

The ritual took an unexpected turn, and Saturn helped me overcome a strange obstacle, and I think I’m going to seriously start working with Saturn on a few things soon.

I practice a LOT of sigil magick, and have for many years, but, I am always surprised when something new happens with a sigil because of what I’m calling.

Near the end of my ritual, I stood over the alter, and put my hands on the sigil and started directing my intent, what happened next, blew my mind.

I literally almost got sucked into my sigil.

I literally felt something powerful sucking my awareness deep into the sigil. To the point where my arms were straight and rigid, yet I perpetually had the sensation of catching myself like you would when you fall forward and fall asleep. Then I realized, it was my spiritual body that was being pulled into the sigil.

What happened was powerful, and in some ways unexpected and disturbing.

Afterward, I decided it would be good to meditate on the ritual to iron anything out that may have escaped me, and to travel into Saturn, since it was a powerful force that was calling me within.

But I learned tonight there was perhaps a lot I had to learn about the forces I was calling on that night. I’ve used Saturn before, but I don’t think I ever used it like this.

I’m awaiting to see the results of my ritual, like Defectron, may talk about it may not in time.

Also, it’s funny what Musta said about 3 earlier in the other May 10th thread, I was told to specifically to do something in 3’s.

There was a trinity theme, and a trinity of offering at the end. That last part was pretty strange too. I’m not usually big on that kind of stuff, just seemed right for this ritual, and I have to say, there is something about how that worked out that seemed to make sure the ritual went way better than it would have.

I place no emotional attachment on this ritual, and I really hope to just forget about it, and to be pleasantly surprised by the outcome and a world that is ever in my favor.

I hope everyone’s rituals went well. I hope you guys make your enemies shudder at the quake of power Saturn blasted the earth with last night.

You are already god,
-Frater Apotheosis

Awesome stuff as always Frater A.

But the stuff I’m saying about the significance about the number of Saturn is that May 10th was only the beginning.

Not just in results but the work itself.

But the stuff I’m saying about the significance about the number of Saturn is that May 10th was only the beginning.

Not just in results but the work itself.[/quote]

Dude you’re blowing my mind, that’s all I could think about after the working was over. I think this is one ritual above many that really left me with a feeling that there was so much more I needed to do in this sphere.

I’m gonna PM you something special.

Looking forward to it brother!

I’ve been feeling an urge to work with Saturn and getting impressions of 3 having significance lately, and your posts on the number 3 and the relation to Saturn I’m taking as confirmation of this being important at the moment. Thanks FA and MK.

Can I take a mo to promote the Stoicheia planetary exercise from Stephen Flower’s book Hermetic Magic, which concludes with intoning the “sound element” for Saturn, Omega, Ω, directly upwards whilst visualising the letter and also the number associated with the planet - here’s a cheatsheet: 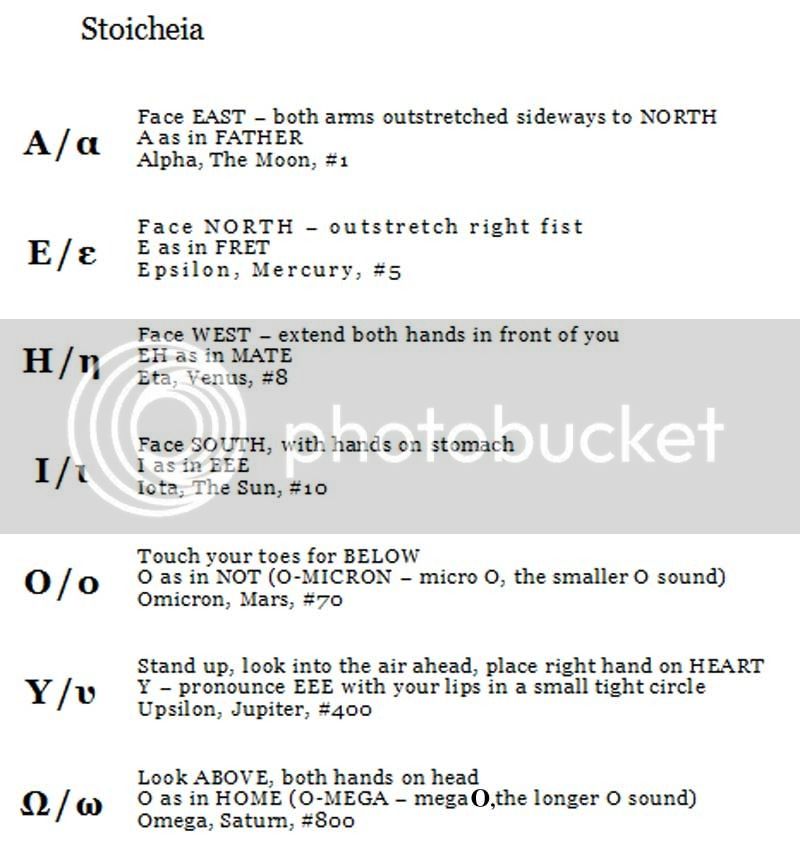 I did this every day during the Saturn working I did last summer, and most days since, and I can seriously rate that working as having been successful in its intention and unfolding.

I don’t rate any planet as “malevolent” and believe they each carry a gift and a chance to shed our chains, if we’re willing to explore them, and I think that idea of intoning Omega to link to Saturn might be useful.

Thanks for adding that Lady Eva.