Maria Padilla and I

So yesterday while I was waiting to meet up with my lover I stopped at a Barnes and noble and read a few books to make the time go by. I was drawn to the section with spirits, demons, and horoscopes . So I picked up this book called encyclopedia of spirits and I first was looking for Pomba Gira which I did find but it was a bit vague, Then a few other spirits. I randomly flipped the page and found Maria Padilla, her section was pretty full and not as vague as the last one. I kept reading and found out something I hadn’t known before, that she takes a part of Iberian love spells. I found that really interesting because I recently found out from ancestry that a good chunk of my family is from the Iberian peninsula. I think it somewhat makes sense why I’m so drawn to her now. I’ve always thought she was just a Brazilian Queen. Any words on this ??? Could she be reaching out to me ??? 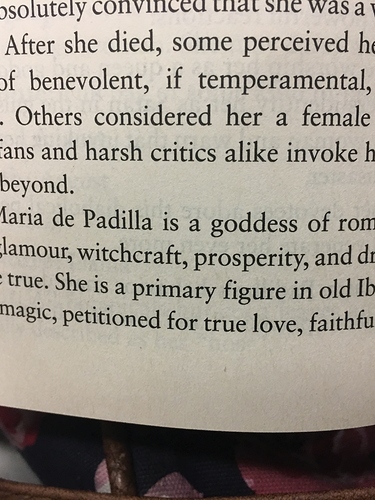 Perhaps. I’ve had coincidences where I will either be thinking about a god or wanting some aspect of my life to change and then I’ll come across a random section of a book that ends up helping me. That happened with my mental illness, Baphomet, Sekhmet, the Devil, owls, Tiamat, Santa Muerte and my struggles in math class.
See if you can find anything else about Iberian-region witchcraft online or at that bookstore. If you can read Spanish or Portuguese, that might prove to be helpful.

Maria Padilha is one of the paths of Pomba Gira, she is worked with in Afro carribean love spells (amongst many other things) because she works very fast.

She is very popular because of her fast powers of manifestation. Historically Maria Padilha was a powerful woman who learnt the ancient sorceries of the different tribes and she used it to her own gain. She can teach you secrets of witchcraft and sorcerers and how to use the sexual power latent inside you.

Research into her if you want to work with her and contact her when you feel like you are familiar with her energies somewhat. Evoke her.

There are other paths of Pomba Gira but Maria Padilha is one of the most celebrated, she’s also one of the patrons of the Quimbanda path

She’s very interesting to work with