Hi everyone, I want to share some information on Taoist ritual robes. 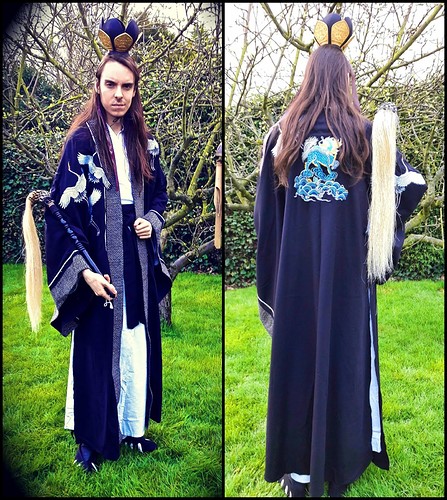 Usually, when identifying robes and how they are used in magick, the name itself provides good insight. “The Robe of The Immortal Crane” is a design that is mostly used for healing spells. It enables the practitioner to work closely with any of the Celestial Immortals with relative ease. Spirits such as Zhongli Quan, Lu Dongbin, Li Tieguai, etc are all drawn to this robe. It holds symbolism of the famous “Red-Crowned Crane” which in Taoism is a representation of longevity, immortality, and living a long life.

These symbols work very well if you are interested in “Healing Magick” for either healing yourself or others. The symbolism of the mighty dragon embroidered on the back allows the robe to be used for other spells aside from healing, dragons in Taoism are deeply connected to water and rain, think Ying Long, The Responding Dragon. Dragons are often known as “The Gods of Water” and can be petitioned for rainmaking rituals within the tradition of Taoist Weather Magick. A magician who wears this robe can also petition dragons to help with flood control. They have power over waterfalls, rivers, oceans, and lakes. Dragons are seen as being highly auspicious creatures often linked with glory, Chinese imperial families, the Emperor himself and they represent the realm of scaly creatures just as the phoenix represents the realm of feathered creatures.

In China, three-clawed dragons were commonly used during the Tang Dynasty. The grey border that travels all across the outer robe is a representation of “The Middle Path” the wearer is allowing others to know that he or she is not a follower of black or white magick but a practitioner of grey magick, I swear no allegiance to The Left-Hand Path or The Right-Hand Path, I respect both and I see there is wisdom in both. It is here in this neutral area where balance can be achieved, where the Tao is most divine. The keyword here is harmony. A robe like this is perfect for a grey arts sorcerer.

Out of all of my occult robes, this is the one I’ve worn the least, I always tell people, a robe is at its weakest when you wear it for the very first time. Robes gather power over the duration of many years, every single ritual you practice is “imprinted” into the fabric, the robe has a “spiritual memory” it recalls all past rituals, remembering every incantation, every invocation and every experience the wearer has had whilst wearing it. It also absorbs information by drawing in incense smoke. In the I Ching Book of Changes, it mentions that the colour black is the colour of Heaven, I personally believe using black helps me connect to The Northern Dipper. 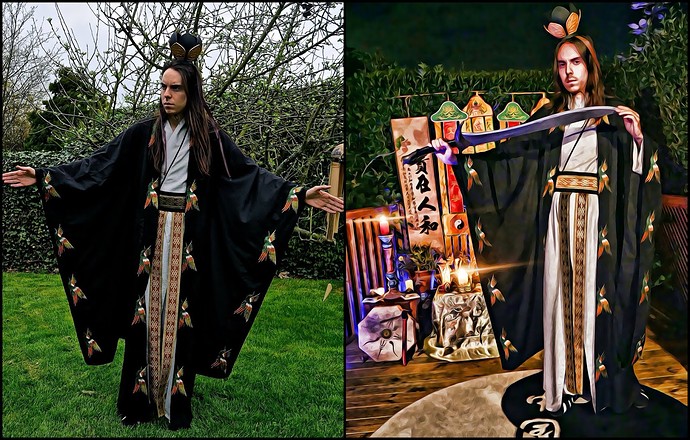 “The Great Robe of The Red Vermillion Bird”

This robe really is something extraordinary, whenever you see the word “Great” in relation to the name of a Taoist robe, you know that it has some serious energy and power to it. It bears some resemblance to another type of master’s robe in Taoism known as “The Robe of Descent” However, mine here is even more unique. Unlike The Robe of The Immortal Crane, this one here is entirely bespoke and custom made just for me, it is the only one of its kind in the world and it was tailor-made to fit my personal practices.

As a Weather Magician who walks an Eastern path, I struggle to find appropriate ritual attire, the colours, cut, symbols and material are very hard to find so I had my “perfect” robe commissioned a few years ago, this is the result. The Great Robe of The Red Vermillion Bird draws the majority of its power from The Bird, often confused with the Fenghuang. This bird represents fire, all feathered creatures, the Southern direction, the colour red, the season of Summer, the trigram of Li (meaning flame) and in Feng Shui it is associated with fame, reputation and good fortune.

Its appearance is said to be similar to a glowing fiery pheasant with flames that never burn out. It is a highly auspicious creature that belongs to a legendary group of beasts known as “The Four Celestial Animals of Feng Shui” (Relating to The Twenty-Eight Mansions) In Taoist Alchemy, The Bird represents a persons Shen (Spirit) and their Intention. At its core. The Bird represents seven celestial mansions which consist of the following, Well, Ghost, Willow, Star, Extended Net, Wings, and Chariot.

Whilst wearing the robe, Star-Lords can be petitioned, entrance into the realms of the stars can be accomplished via meditation. These energies can be utilized very efficiently whilst wearing this robe. It isn’t just the symbolism that holds power, the overall cut of the robe is most important. The sleeves are extremely long and the whole robe is very wide. In Taoism, long and wide robes are used for elaborate rituals which have many technical steps and complex formulas. They are almost always worn by the adept and those who have years of experience with ritualism. When the magician opens his or her arms widely, the robe represents the four directions of North, South, East, and West and this square shape represents Earth in general.

The colour black, again, is a representation of Heaven or “The Great Unknowable” This robe is profoundly useful in magical operations that require an enormous amount of qi. The two main colours are black and white (or grey) the outer black robe is responsible for absorbing qi from the stars, the vegetation, the trees, the waters, etc and the lighter inner robe deflects excessive qi that the black robe draws in, ensuring that the magician never absorbs too much, as this can be dangerous. These two robes create a cycle, where they rely on each other, much like the Yin and Yang. The dark attracts qi, the light repels qi. If a magician wore all-black robes, he or she would be imbalanced, the same applies when wearing all white. The goal is to reach a state of harmony.

I hope you’ve found this informative, if you have any questions feel free to ask. - Lord Josh Allen

A magician who wears this robe can also petition dragons to help with flood control.

Are you familiar with the myth of the 100/1000 koi fish that tried to swim up the waterfall but only one made it and was rewarded with the gift of becoming a dragon? I wonder if since this robe is tied with healing and dragons one might be able to ask for assistance in overcoming trials/changing an aspect of themselves to become a “dragon” on the other side?

Hi there. Yes that could indeed be possible, I haven’t tried it but I know other Taoists who have done rituals with dragons such as Ying Long who say that after death they can reincarnate as an ethereal dragon within the astral realm. They can still retain all of their memories and personality. In Taoism, dragons are great for overcoming trauma.

do you practice Kuji-in and Qi-gong too in order to work with the elements?

Hi there, thank you! I do indeed practice Qi gong. I’m a Feng Shui practitioner so working with nature and the elements is a major part of my magical routine.