I have just discovered Lucifer’s Tarot Deck and it has me intrigued. 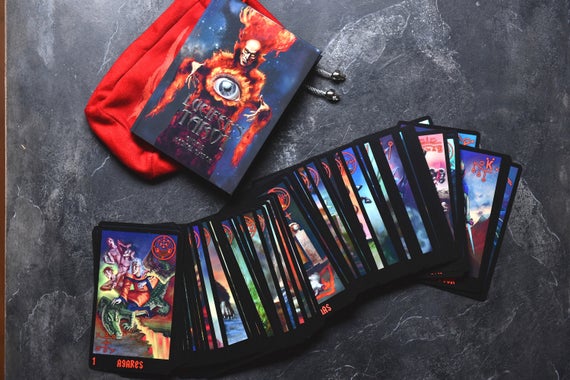 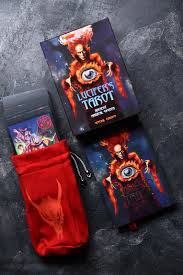 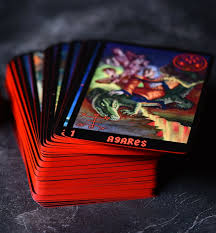 Has anyone used these and how do they differ from other Tarot Decks?

It sure looks beautiful

I’ve never used that one as I cannot afford but just as any other tarot they are unique to themselves and the spirits or oracles who guide. The creators generally have their guidebooks to help you understand their version of the Tarot. While most decks are based off the Rider Waite they are known to have slight differences that makes the decks unique. That is just what I notice sense I do Tarot and have for 18 years.

Granted that’s my view on it but that is what i have come across.

Indeed it does. And each card is based on one of the spirits if the Infernal Empire

I want them so bad myself but I have to get things stable again since I was laid off. Though working again catch up sucks

You will be prospering again soon. I am sure that one of these great beings of the Infernal Empire will help you. Try performing some abundance spells and money spells…good time since it is the new moon

Nice one! I don’t know how to use tarot properly, but I’ll be learning soon. It’s a really useful skill to be honest.

I have this deck. Use them kinda like Oracle cards. Not doing full spreads with these.
If i’m drawn to a certain one i meditate on it and/or use it on my altar while working with the spirit on the card.

Could you pick an oracle card and whatever card has that spirit on would the be a sign you may need to work with that spirit? If that is the case that is certainly a unique way of finding out who you need to work with. Could I ask you to draw me an oracle card please from your deck? I know it is the wrong topic to ask but I would like to see if my theory works. It would be greatly appreciated.

Yeah that’s pretty much what I’ve been doing or i ask if any spirit has a message for me.
I split the deck up because the card stack is so thick and it’s difficult to put them back in the bag.
(I have the big card version with the red edges)
The way i store them is: Cards up to number 72 are in the original bag and the others are in a separate bag. Sometimes i like to specifically ask or see if any from the Qliphoth will answer.

I haven’t tried asking for someone else before so that will be interesting.

Could you ask your deck about my journey on the LHP and just pull one card for me please?

I asked the first half of the deck first. Which spirit wanted to work with you and Botis jumped out pretty quickly. (Don’t know if you have encountered him before) .Then i asked your questions and two cards came out together: Chaigidiel and Samchikot. Ironically they are number 87 and 88 in the deck. Right next to each other.
Chaigidiel is supposed to represent an obstruction. I had to dig a little bit on the internet to find more info:

Aa’Vgial
Ghagiel ( variously Chaigidel, Chaigidiel, or Oghiel),
in the belief system of Kabbalah, is the name of the Qliphoth, corresponding to the Sephirah Chokmah in the Tree of Life. They are demons, the Hinderers, described as black evil giants with serpents entwined around them, and they are attached to lying and material appearances, in opposition to those of reality and wisdom.
Augiel or Chaigidiel represents the Sphere spreading Confusion of the Power of God. The cortex of Chaigidiel is called Chogiel, “Those Who Go Forth into the Place Empty of God.”
Beelzebub, Lord of the Flies, and Belial are major demonic powers of this Sphere.

About Gamchikot, in the book it says it stands for rupture and the info i found on the net:
The Angel of this Sphere is Azariel (God’s Helper”), and the Angels of this Klipah are Named the Gamchikot (“Devourers”).

I can’t find any more information on these two entities unfortunately.

I have not encountered Botis before. I will research him and see what his skills are. Atm I am working with Lucifer and already made a blood offering to him.

Thank you for that. So it seems that I could have obstructions either at the present or in the near future on my path, which could hinder me going further down the path? So are those two giants you mentioned hindering my path through lies and fake material appearances; are these things being produced by an hidden enemy or am I hindering my own path? And will the devourers help me eat through my obstacles so to speak?

Botis is astrologically assigned to the zodiac sign of cancer in the guidebook but i don’t know if that’s accurate. We actually have entered the sign of cancer as of today.
On another website i read that his presence is strongest mid June.

You might encounter obstacles on your path.
(Lies, material things can be seen as distractions or confuse you) You have to work through anything that could stand in your way. I quite like the visual image of devouring obstacles. Sounds more like a piece of advice.

Botis is a spirit of divination and gives answers to things in the past, present and future.
He could act as a spiritual guide and if you do have any kind of enemies. It says he brings favour from allies and enemies.

It is a great deck for rituals and spells. I like it because it is of Slavic origin. It also has the record of being the most expensive deck I’ve ever bought. The book that comes with it is great as well for checking the powers of the spirits, although some views of the autor I don’t share. I’ve had to work the zodiacal demons with 777 because the information about them provided in the companion book was lacking and weird. It features cards of the Goetia and the Qliphoth, some of them with alternate names. Among the cards of the Qliphoth, there are cards for the important demons of each one, plus the zodiacal demons, so it has cards for Naamah, Lilith and Lucifer, it even has a Moloch card.

I own this deck and I use it as an Oracle deck. I combine the divination meanings of the cards (which are barely a few words long) with the demonic description if possible or necessary. I’ve created an Oracle system that works extremely well for me. These cards have a magickal aura and energy to them.

I couldn’t even afford them when I ordered them because I was nearly broke, but somehow *mysteriously * The package ended up lost and I was refunded my money, only for a stranger in my neighborhood to deliver me the unharmed package a few days later because it was delivered to them by mistake. Like I was meant to have it. Was a really cool synchronicity

Have it too. Just the second sigil on the bottom don’t really make sense to me . 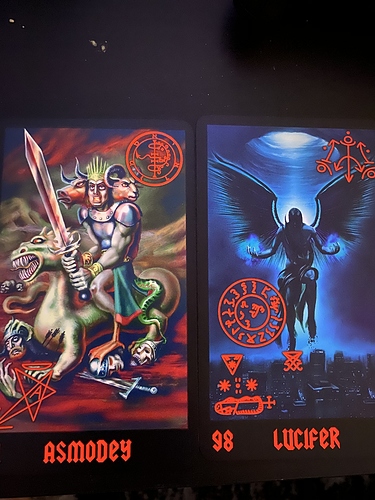