Lucifer's Tarot: an Insightful Look into the Deck

The deck has 105 cards with images that contain a hidden magical explanation.

The cards depict various mystical pictures of demonic themes having a flame-like background.

All the pictures have been done by a talented artist from Switzerland, Hans Ruedi Giger (died). Yet, the style of the cards brings out a sense of hidden fear and horror. These images contain information about a current state of the soul, possibly hidden fears and hopes, and also the unconscious actions. These cards come with a leaflet, explaining the meaning of the cards and also a basic description of rituals and spells that you can produce by using this deck.

Aside from the common 78 Arcanas, the deck has additional 27 cards with Spirits aiding and empowering the magician in his rituals and spells. This is one of the most distinctive features of Lucifer’s Tarot.

The author then describes the deck of cards, the meaning of each Spirit representing the card. 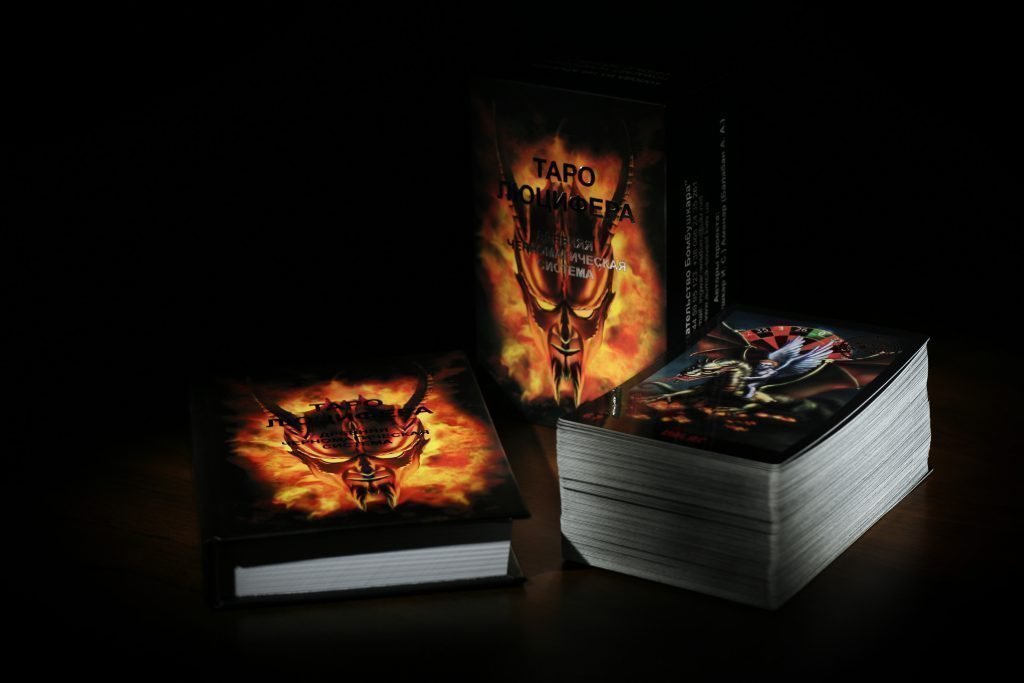 Once you have a good understanding of the Kaballah and demonology, you can slowly start working with the deck. You cannot rush the process. It actually took me 31/5 years to create the deck. Needless to say, for someone who just bought the tarot deck needs at least a year to learn about the system. The basic questions some may have are:

I want you to understand, this tarot deck is not a new modification of a regular, classic tarot, where you can follow simple steps as found in a classical tarot reading. The deck is represented by Higher Power with an array of daemons, and each arcana means and is represented by a separate unique spirit (demon).

The deck is representative of a Qliphothic tree with its unique structure and wisdom.

The first 72 arcana are represented by the Dark Princes (Minor Dark Geniuses) – the Goethic Spirits. They, however, are not following its classic order for very special reasons. Then, it is followed by another 12 Qliphothic Princes (Major Dark Geniuses), each of them is ruling over 6 Reigning Princes and is responsible for each zodiac sign. They are followed by the 10 Hosts of demons. Each Host is under a corresponding Archdemon (King). As to note, the 10 arcana of hosts are not used in general foretelling spreads (except just one – ‘A spread of (your) Birth’) but is rather used by the operator to establish a hierarchical level of your own self infernal being and to call upon similar entities.

The Hosts are followed by the Archdemons, governing over the Hosts. For example Bael, Astarot and Asmodey are the Minor arcana, but Lilith is responsible for the first Hell and simultaneously for the 9th, therefore we have left only 8 corresponding arcana to the Archdemons.

I do not recommend to work with other Archdemons arcana, except for the mentioned above, as only proficient practices/advanced (higher-ranked) magicians may use them in special Tarot spreads and/or rituals. And finally enclosing the deck are the three arcana, the representatives of evil- Kemetiel, Velar (Veliar), and Atiel (and everything said above about the Archdemons is also regarding these three).

So the total of 105 arcana representing Higher Power, 105 channels that translate and bring into rituals an unimaginable volume of energy, power, and knowledge.

Another important aspect is a question of protection from the Infernal World. First of all, a magician has at least 2 protectors from the Dark Princes’ realm. The first one is usually calculated by the date of birth, and the second is according to the time (of birth), which is the strongest of all. For example, someone was born on August 2 at 3:50 am. The first Dark Genius will be Decarabia (30.07-03.08) according to the date, and the second will be Batin (03.40-04.00) according to the time, respectively. They will be more eager to respond to the inquiring operator. However, nothing is guaranteed as this is very individualistic.

The most common spread methods do not necessarily bring out the expected outcomes. The 12 Cliphotic Princes are the Major Dark Geniuses and only most advanced masters of magic can use their protective features.

Each Prince is ruling over 6 Dark Dukes of his own zodiacal realm, and he is most powerful during one month of the year, his corresponding zodiac sign. A black master who has protection from a particular Prince may have easy contact with the 6 Dark Dukes that are under this Prince’s realm.

People who were born from 17- 21 of March, as the most concentrated activation of the dark entities, have the following protectors:

March 21. – Satan (the unknown Darkness) however, these protectors may be included only when a magician reaches the highest level of Great Doing.

I had always believed that Lucifer and Satan were the same entity, I was already fascinated with this tarot deck, now I’m even more, thank you for sharing it with us, Angelique

Thank you so much for this information. Bookmarked