Oh so I have been planning and looking at dedicstions with Luciferianism and found the one I had done months ago from VK Jehannum was actually sufficient. So earlier this evening i sorted out the mini altars in my temple and affer went sat on my bed to meditate then call Azazel. I felt him but I am not fully relaxer either that ir it wasn’t to be. He tends to feel all encompassing. Tonight I saw grey-ish image like fogg and differn masculine facial features -not exactly full heads… I think I saw two or three. Then just blackness.
My favourite chants after a bit of muscle exercise is the reverse count and also “I am darkness and darkness is in me// adapted from " I am qi & qi”
is in me" and more recently add of “Alash Tad Alash Alash Tu. Natz Fehr atu infernum negra” from E.A. Koeting and Raven Black
Then just u know relax on this forum.
But the urge for Lucifer became strong. So i set up altar for him in my bedroom. And i dont know why put on part of my ummm black “honey birdette” (all black) I bought last year. I relaxed and changed his sigil. Then sat back to call his enn … there were no other chants relaxing down felt quicker.
More deeply relaxed with my feet dangling off the bed.
I could feel him strongly he begins from the crown of my head tingling down i had to strip ( being the asthma atm). Put on my winter gown (red), and re entered state and he continued presence. Then i thought he was wanting some banana and honey. So i let the thought that after I will. After a while i had to lay back I really felt horny!! His images were unclear. But his sigil flash was clear. I felt moisture between my erm thighs. I let Lucifer that Im not holding myself back. … after a while I extinguished the flame …and… Then cut up a few srips of banana drizzle with honey and placed it on his altar. Re lit flame. I think theres residual energy. 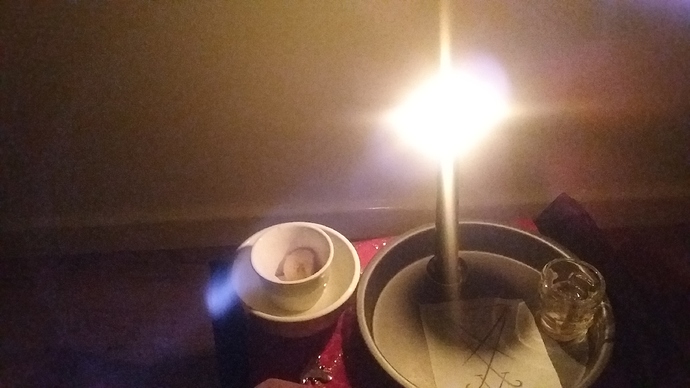 Heres a picture.
I don’t know how this works but doing this or some communication with him has been on my mind since before contact with Belial but I wanted to get rid of prior brainwashing first no religious overtones.

Thanks for sharing! I also got an urge recently to make an offering to King Paimon.

Was thinking random than on that sigil. Im plaxing it on my Lucifer alter tonight maybe its a calling card also. Last night he wanted a white candle not just black.
Why? Didi it anyway. White often means death or peace