Lilith is or never was a demon, her enemies made her into one. One group of people got on the older lies and kept it going.

I personally do not call her lilith, but Lady Wind. 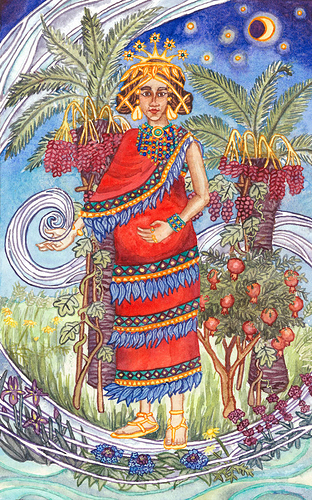 In Sumerian religion, Ninlil (𒀭𒊩𒌆𒆤 DNIN.LÍL"lady of the open field" or "Lady of the Wind"), also called Sud, in Assyrian called Mulliltu, is the consort goddess of Enlil. Her parentage is variously described. Most commonly she is called the daughter of Haia (god of stores) and Nunbarsegunu (or Ninshebargunnu (a goddess of barley) or Nisaba). Another Akkadian source says she is the daughter of Anu (a.k.a. An) and Antu (Sumerian Ki). Other sources call her a daughter of Anu and Nammu. She lived in...

As “Lady Wind” she may be associated with the figure of the Akkadian demon “Lil-itu”, thought to have been the origin of the Hebrew Lilith legend.

https://landofgoddesses.wordpress.com/tag/lilitu/
Creatures resembling Lilith are first mentioned in the Mesopotamian mythology, however they do not take the shape of the characters from subsequent Jewish legends yet. While researching the Epic of Gilgamesh Samuel Noah Kramer studied the text of Twelfth Tablet which was not originally included in the poem. What he found there was the story of Inanna who planted the huluppu tree (most probably a willow) in her garden in Uruk so that she could make a throne for herself from its wood. However, when she came back after ten years to cut the tree, it turned out to be inhabited: a serpent was living in its base, a Zu bird (a huge bird with the head of a lion) had the nest with its young in the crown and ki-sikil-lil-la-ke found the home in its trunk. According to the tablet Gilgamesh, asked by Inanna, has smitten the serpent, made the Zu bird fly away to the mountains with its young and ki-sikil-lil-la-ke destroyed her house and fled to the forest. There is not enough evidence to identify Lilith with ki-sikil-lil-la-ke, in fact modern scholars reject this connection. The only thing that can be determined with high probability is the analysis of the tree spirit’s name: ki-sikil means ‘sacred place’, lil is ‘spirit’ and il-la-ke can be either ‘water spirit’ or an owl. According to one of the Sumerian texts, Lilitu is Inanna’s handmaiden, a beautiful prostitute whom the goddess sends to the streets so that she seduce men there.

Moreover, in the texts of incantations from Nippur in Babylon dated back to around 600 BC there is a mention of vardat lilitu meaning a female spirit connected with storms and winds; the word lili itself was associated with magic and demons. According to some hypotheses, the Sumerians and the Akkadians, the native inhabitants of Mesopotamia, were bilingual and their deities became syncretised, in this case in the Sumerian language the spirit was named ki-sikil-lil-la-ke while for the Akkadians the name of the same spirit was Ardat-lili (Ardatû). Lilitu were also present in the myths of Assyrians, the heirs of the Sumerian and the Akkadians, as the demons hunting for women and children associated with lions, deserts, storms and diseases. Originally they were linked to the wind and storms and then to the night and copulating with people while they were sleeping; lilitu were hostile towards families, seduced men (it was believed that sick men were possessed by lilitu), caused infertility, miscarriages, complications during delivery and death of babies. Prostitutes were also called ardatû.

Anzû, also known as dZû and Imdugud (Sumerian: 𒀭𒅎𒂂 AN.IM.DUGUDMUŠEN), is a lesser divinity or monster in several Mesopotamian religions. He was conceived by the pure waters of the Apsu and the wide Earth, or as son of Siris. Anzû was depicted as a massive bird who can breathe fire and water, although Anzû is alternately depicted as a lion-headed eagle. Stephanie Dalley, in Myths from Mesopotamia, writes that "the Epic of Anzu is principally known in two versions: an Old Babylonian version of the... 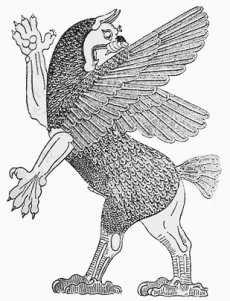 I had a dream about this being. It was dying and it burned up and came back to life. It is a bird-lion-phoenix.

Thank you for posting this, it affirms some work I’m doing right now, i can’t really disclose it but this matches perfectly.

Everyone should watch this. Its how I learned about it. I have never felt anything for the name lilith, but after learning about Ninlil I was like thats it. 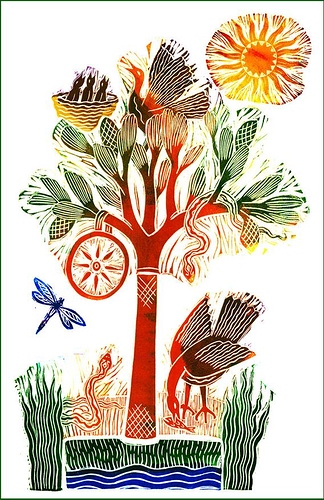 “The Snake” The Snake is a universal symbol of immortality and creativity in myth through out the ages and in virtually all lands inhabited by humans.  Many snakes shed their skin at va…

The Gilgamesh Epic of ancient Sumeria tells of Gilgamesh’s search for the meaning of life. Gilgamesh was told the plant of eternal life lay at the bottom of a certain lake.

After retrieving the plant Gilgamesh rests. A snake comes and eats the plant. The snake becomes immortal and Gilgamesh goes home to die.

The Snake is on this seal from ancient Sumer with the Huluppu Tree.

The Sumerian arch serpent-god whose name was Zu or Ningizzida is lord of the watery abyss from which mortal life arises and to which it returns. Emblem of the healing god Ningishzida:

As the birds began to sing at the coming of the dawn,
The sun God, Utu, left his royal bedchamber.
Inanna called to her brother Utu, saying:

Are Ba’al and Lilith in the same bed? Cuss I definitely feel like it! This matches up well with current workings and findings of my own! She really is other nature (to a degree)!

this is great to know thak you for sharing

And the dark maid Lilith built her home in the trunk.

"The only thing that can be determined with high probability is the analysis of the tree spirit’s name: ki-sikil means ‘sacred place’, lil is ‘spirit’ and il-la-ke can be either ‘water spirit’ or an owl."

I wonder what that truly means? Lady Wind making her home in a tree? Never heard about this before. Anyone get any feelings or ideas?

ki-sikil-lil-la-ke
It is Moffat’s belief that “ki-sikil-lil-la-ke” is not a demon at all, but simply an owl. It is reasonable to assume that people had superstitious beliefs about owls and knew little about them at the time.

An owl, you will note, is also one of the creatures sacred to the fertility goddess. 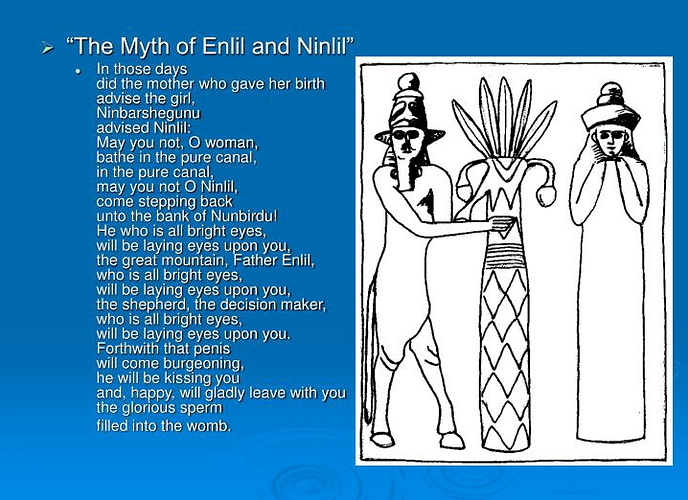 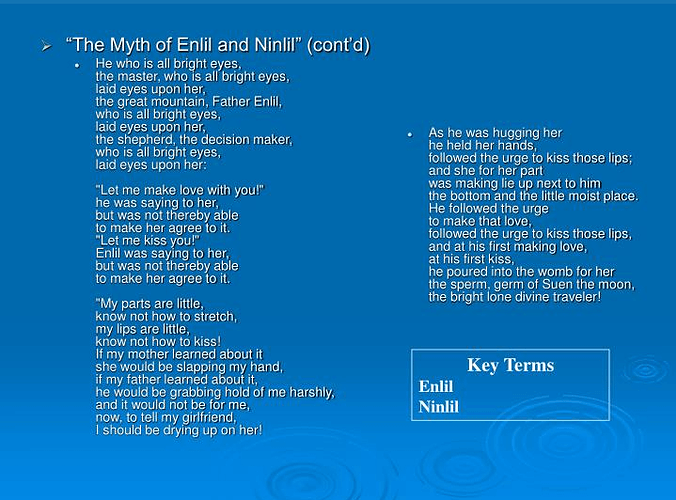 Enlil From Wikipedia, the free encyclopedia Part of a series on Ancient Mesopotamian religion Enlil (nlin), 𒂗𒇸 (EN = Lord + LÍL = Wind, “Lord (of the) Storm”)[1] is the god of br…

The myth of Enlil and Ninlil discusses when Enlil was a young god, he was banished from Ekur in Nippur, home of the gods, to Kur, the underworld for seducing a goddess named Ninlil. Ninlil followed him to the underworld where she bore his first child, the moon god Sin (Sumerian Nanna/Suen). After fathering three more underworld-deities (substitutes for Sin), Enlil was allowed to return to the Ekur.[3][4]

Enlil was known as the inventor of the mattock (a key agricultural pick, hoe, ax or digging tool of the Sumerians) and helped plants to grow.[5]

I have watched this! Really does make sense!

I KNOW THAT MY LADY WAS NEVER A DEMON! That’s why I will never understand why people invoke her as one…she has total control/free will just as we have, unlike the demons that people invoke for their own reasons! Most demons are bound, by their constraints…like dogs leashed by a chain…until someone lets them loose…I don’t personally class Lilith as lady wind…my mother is forest bound! And a whole lot more!

Griffins are back half lion, front half eagle. An Anzû is usually an eagle, but sometimes an eagle with a lion’s head, totally different.

im sorry I didnt mean to be wrong

She is other. Her energy is very different.But when she picked me up, she was Lilith. Back then I had no idea who she was.

some of the old Sumerian words had double meaning
like En and Nin Lil, lord and lady of wind
lil could also mean spirit or breath of life ( which is also air)

and just maybe, reading into that, it could be that Enki was a sort of govenor of the material and Enlil was a govenor of priesthood/spirituality as they are referred to as names in some texts and titles in others

The only reason I still call Her by that bedeviled name is because, while it is offensive to assume she is a demon, there is no such thing as bad publicity. I explain, to me there is no way to offend Her given her centuries-long wisdom, and the very same fact that to see her as a demon causes a curious morbidity in those who don’t know her? It serves as a calling card.

I’ve initiated some friends into the occult, especially those of alternative sexuality, by explaining how Lilith is sympathetic to their plight. That alure, of an otherwordly being who not only does not judge them for however they get their jollies, but is also welcoming, has served to break the silly notion that “God” hates their guts for being born anything less than heterosexual.

To make it short a friend of mine did not work with angelic entities as she was completely sure they follow some tyranic anti-LGTBQ agenda imposed by YHVH or whoever seems in charge, citing that those beings surely enforce natural law and that, by extension, loving people your own gender implied you were antinatural. Took me a long while to convince her that those are mere human notions and that they are more concerned about cosmic rules such as the Sun coming up every morning than what she or anyone does with her privates.

Still tho, until she could evoke and get the right answer that her own insecurity was causing the misfires? Dear Lilith was already her patron, as she is to all who are outcasts in their own way. Now my friend knows better and that our Lady is not all about sex and rock&roll, that there is a deeper meaning to her teachers and things that many of us already know, but until she reached that point, the allure that Lilith was something forbidden and counter-culture? Worked wonders in opening her eyes.

So while I am deeply thankful for this vindicating information? Keep that trick card up your sleeve. Makes our ranks swell with people who finally snap out the Biblical conditioning.

Hello mate, what you have said I agree with in alot of respects…the LGTB ETC…I Carnt comment about. All I know is our goddess, my goddess is alot older then people give her credit for! I find that people petition her as some kind of rebellion against God, for their problems etc…a way of rebellion? Everyone seems to want negative, I need, I want! I have never found this etc!
Maddness isn’t it?

All the older languages have this connection: chi in Chinese, ruach in Hebrew, pneuma in Greek, it’s a very common thing. The breath and the spirit have a strong connection, English is one of the weird ones.