Call to Lamastu, to come empower a curse or any dark arts:

“Dingir Kamadme Marat Anu, I call to you. Rebellious Goddess whom I worship most of all, Magna Mater Maxumus, Lamastu The Exalted One, you who seizes and binds the evil asag, who will always dwell within the inner-chambers of my hearth and home, come forth I ask of thee and be present! O’ Daughter of Heaven, Named With A Name By The Great Gods, She-Wolf of Wild Lands, Mistress of Poisons, Dark Arts and Sorcery, may you hear my call I send to thee and descend to me with the birds of heaven, from the mountains of sweet scent that you love and accept my humble offerings I place upon the altar this day. Fearless, Cunning, Furious Dingir Innin, step out from the shadows, in which you reside and come to my side. Fever Magistra, Sister Of The Gods Of The Street, put on thy most terryifying face, come threatning in all thy forms, wielding your scythe. Lamastu, Strangler of the Lamb, Snatcher Of Souls, you know my designs and come to strengthen my magical arts…I welcome you, I praise you, I thank you, I serve you, I love you… In all your glorious forms! Hail Lamastu! Hail Kamadme!”

A Draconic Invocation of Lamastu, to be done after the Invocation Of The Dragon found in the Grimoire of Tiamat, usinging the key of night, along with black or red candles and dragons blood incense:

“By the blood of the Dragon, which is my own essence, & by the key of night, I call you, Lamastu, the Daughter of Anu, Named with a Name by the Great Gods!
Arise from the womb of primal chaos, come with the birds of Heaven, filled with the awesome radiance of midday & embrace me!
Clad in raging flames of frost & fire, howling like a demon-dog, roaring like a lion, crawling upon my flesh and penetrating my soul from within! Arise to me from the abyss of Tiamat, travel to me from the moutains and deserts that you love, from the dwelling place of serpents, scorpions and wandering, restless spirits! Hear my call and come to me, Lamastu The Exalted One, grand me the power to scatter venom on the minds and bodies of my enemies, to drench them in the waters of distress, feed on their souls for nourishment, seize them with burning fever & leave them wailing in agony!
Come to me, Innin; Victorious Mistress, I offer my body as a vessel for your divine essence, enter this temple of flesh, enflame my heart with your primal hunger, open my eyes so i may see through veils and illusions & intoxicate my dreams with visions of mighty power and glorious splendor! I call you, Lamastu, in the name of the Dragon! In Nomine Draconis, Ho Drakon, Ho Megas!”

Of course, make it suitable for yourself

Welcome @Baeldona_IO It is a rule of this forum for all new members to properly introduce themselves, so please click the link below and tell us about yourself and any experience you may have in magick ie what you practice, how long you have practiced, areas of interest, etc:

Can you please message me on Facebook. My name is Baeldona IO on there. I have some really important questions I have to ask you. Thank you

Before trying to get people to hit you up on Facebook, @Baeldona_IO, please follow the rules of this forum and introduce yourself as you were previously asked to do. Failure to do so may result in the removal of your posts until the rule is respected.

Alright, I will do that now

Thank you for your kind words, if you wish to ask me something, feel free to PM me on this

Can you send me a message so I can Respond?

I dont know how to do that

You can’t. The ability to PM is restricted by the system for newcomers until they reach a certain threshold of activity on the forum.

Okay, well, I have to ask some important questions. I guess it isn’t mean to be yet. Thank you.

@TheBlondeBrujo can message you, and you can reply, you just can’t initiate a PM.

I only gave you a heads up about the restriction for newcomers 'cause of this:

The Many Faces Of The Queen of Queens- Lamastu 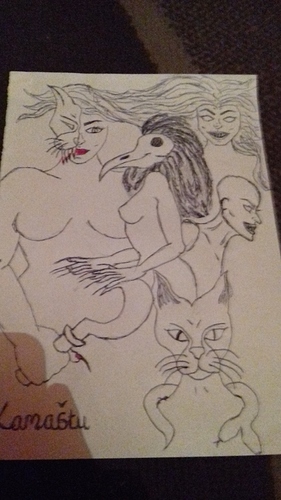 Prayer of Praise to Lamastu, based on Ancient Incantation:
"Great are you, Child of Heaven, who tortures babies, your hands are nets, your embrace is death, you are cruel, angry, predatory. O Child of Heaven, I praise thee!
"A runner, a thief, is the Daughter of Anu, you touch the bellies of women in labour, pulling out the pregnant woman’s baby. O Daughter of Anu, I worship thee!
"She Who Ignites The Wood To The Flame, is one of the God’s, her brothers, with no child of her own. O She who ignites the wood to the flame, I thank thee for your presence in my life!
"Goddess Whose Face Is Wild, whose head is a lions head, whose body is a donkeys body, who moves on the track of the cattle. O Goddess Whose Face Is Wild, I Love Thee!
“Lamastu Marat An, High Lady-Who Answers Prayers, you roar like a lion, you howl like a demon-dog and in all your glorious, mighty forms, I praise thee, I thank thee, I worship thee & I love thee! Hail Lamastu, the Queen of Queens!”

For anyone wishing to work with the Goddess Lamastu, I decided to make a brief list of Lamastu’s Powers and Rulerships, this list is not complete and is slightly rushed due to time constraints, also much I have learned from personal experience, first of all, quoting the above:

“Lamastu controls fierce passions, hot & cold feelings, the element of fire is her domain therefore she controls sexual lust, passion & desire. She also rules over confusion, madness, fierce passions/obsessions, perversion, fear and anger. The Goddess is attentive, listening to the prayers of those who invoke her and showing compassion, shr gives what you need, not necessarily what you want.”

Lamastu Rules Over (and can help you with): *Cord Magic & Bindings, especially those in curses.

I very rarely warn people about approaching Gods or Goddesses, as I see it as the practitioners right to do what they like, but Lamastu is not a Goddess for those new to magic, she is also not one you can simply call on at random. Lamastu expects to be respected, of course, and deserves it, she can fill your life with blessings and grant you unbelievable power, in which you feel like you can over come anything and take on the world, but she can also take everything away, she is also not shy about punishing you. My advice, only approach Lamastu if she is reaching out to you or if you’re drawn to the Queen of Queens & expect to work with her/ and worship her long-term.

I do hope to soon complete a post that will be about my work and experiences with Lamastu, as it is something I’d love to share with others and I know Lamastu wants me to share as well.