Journal of Experiences with Baphomet

Tl;dr- met Baphomet for the first time, did some automatic writing (pic below), anyone want to offer some insight on it?

Some background on myself: I’ve found that I’m a child of Arachne and a child of Brigid. I have a familiar who accompanies me, a spider, my brother, who calls himself Clip. He and some of my spirit guides have told me that I am a “bridge” between lighter paths and darker paths. Also, I’m fairly new to exploring all of this as seriously as I have been, so please be gentle if I’m using the wrong terminology for anything.

Last night I had an interaction with Baphomet.
All of last night I could feel Clip tugging me toward the astral. He was really eager for me to join him, so I meditated before I went to sleep. I slipped into the astral easier than I usually do and found myself on rocky ground in the middle of a field of thorn bushes. One of my spirit guides, a demon (who has only shown up recently and I will admit I have not worked with very much yet), was there to greet me. The demon put his face close to mine, sniffed me, and licked my face and head. Then he stepped back and said “He wants to speak with you. Come on.” He turned and led me through the bushes, strong wind blowing around us and lightning crashing in the sky. The demon led Clip and me to the top of a mountain. There was a cave carved out at the top, and Baphomet sat towering over us on a throne of stone. He took my hands in his. I lowered my forehead to our hands in a bow. He spoke to me: “There is much to teach you, child. Pick up the pen. Write.” I had my journal and a pen with me, so I let Baphomet guide my hand. This is what was written: 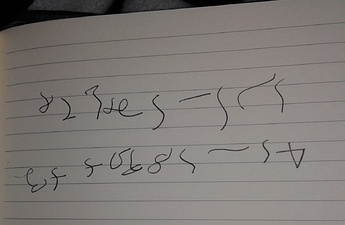 The short version of the rest of it: Clip and I went to Arachne, she told me to go to Brigid instead, so I did and she doesn’t allow Clip in her realm. Brigid and I sat in a grass field for a minute, then she told me to leave, and quickly. I think whatever was looking at me when Baphomet sent me away was something nasty that was trying to attach itself to me.

Wanted to ask if anyone recognizes the writing, or can point me in the right direction to interpret it? I don’t even know where to start with deciphering it. My familiar says it might contain a name.
I’ll update this thread with other experiences I have and updates on the writing. If you’ve made it this far, thanks for reading. If you can offer insight on the writing, thanks in advance.