Since he’s been in a debate so much for politic views,
here’s an example where he’s actually having Magicians and Witches in his Audience.

He addresses that at the beginning,
and goes into topics like Perception.

Really worth a look into,
if you ask me.

Some of these things he talks about,
are huge gaps,
for many,
in their progression,
I personally think.

He has a series of lectures on his youtube which studies the bible from a psychological perspective.

I think viewing it in that light would give occultists some pretty good insights into how/why Christianity became so prevalent.

I also think being able to view the book and research it without dogmatic bias, would help calm a little bit of the anger many of us have towards monotheism. I just notice that many of us here have… disagreements with JCI and other religions, and correct the brainwashing done by the religions practitioners, by an explosive response whenever the book is even mentioned. Might even breed some empathy for those who follow the religion, without excessive zealotry

Even tho my focus was on his great explenation of perception mechanisms,
these things you mention hold value,
and i’m honest,
i’ve overlooked some of that myself.

Thank you very much,
for extending on my work.

That is the wonderful thing about Jordan’s work, each topic branches out into another, able to be dealt with directly, but still has it’s ties to the others.
Indeed, i believe we can say the same thing about knowledge in general and not just Jordan Peterson’s work.

His thoughts on Jungian archetypes have a lot of parallels between what we on the forum call ‘currents’ of power. Definitely worth a look

Thank you,
interestingly i had the option to watch some stuff about Jung,
or this one,
at that day,
so you suggesting to look into jung,
kind of makes perfect sense.

Do you know a good source for NLP focused teachings?

Normal Psychology is kind of nice,
but gets quite boring for me fast.

NLP stimulates my interest a little bit more,
since it’s more practical,
and often laps over into hypnosis and advanced external control of targets.

This video actaully gave me a lot of insight as to what was happening in my life. I realized i saw myself low on the dominance hierarchy after my gf left me. I was flooded into chaos and depression but now that i have a goal of increasing my value im no longer lost and have a greater purpose.

Imma make that bitch wish she never broke up with me. It might take up to a year but she’ll see 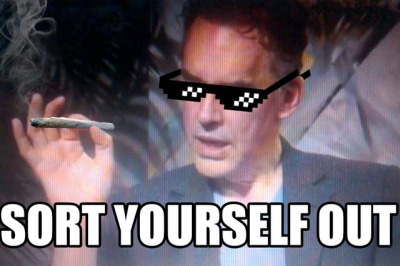 He goes too much into symbolic analysis,

‘’ That’s a blue glass with some pink spots on it, It It It symbolizes the infinity of existence with romantic view of the philosophers trying to fathom it. And And the water means space which if looked from another point of view may also mean wetness of collective life and then the pink spots will be Love, one of the most important substance which holds society together, specially in times of need. ! ‘’

Not to say he repeats himself FUCKING LOT.

No, i know what you mean.

And that, would be that bullshit:

Get Paid to Save Our Planet

Get paid to invite friends to save the planet with you. bUnited is for everyone. And it’s for free.

Disclaimer, do not use this bullshit,
it’s a pyramid Scam. Snowball System. Or even Simpler: the same bullshit,
you consider as normal, in form of “costumer Cards”.

To be honest, i had no idea of the idea of NLP. Not having much under my belt academically, i learn what i can from lectures and articles, but generally end up with a to-do list of background research to do in order to fully comprehend that learning. I see i have some more things to add to that list now

Jordan Peterson is one of my favorite teachers, because his work builds off where the work of many other teachers ends. He does end up having to repeat himself a lot, like goku said, but i think that has more to do with having to ‘unpack’ the foundations for his ideas, rather than glossing over the details

yeah,
plus he’s been fighting off attacks from both sides of the spectrum for quite a while.

No wonder,
he’s been going in cycles.

He’s actually a descendant,
of one of the authors of the medival Book of Oberon.

It took a while,
for me to realize that,
but by now,
i have no doubt,
that i’ve been called towards his content so much,
because of that connection.

He’s definately going to things,
others rather just shy away from,
and don’t want to talk,
or even think about.

Also,
when i look at how much he’s been in debates,
which deliberately tried to take him down,
and attack him directly,
there’s no clue,
he’s been guided and protected.

His repetition may actually not just be because of him,
but rather because of the lack and bullshit,
he had to face.