Is Jehova an impostor entity?

In left hand path circles, you’re going to find a bit of a bias towards Jehova, largely because a lot of people in this space have come from Christian backgrounds that they have now renounced after discovering that Christianity is not the one true religion, alongside the fact that Christianity has historically been the number one enemy of occultists. So its no surprise that Jehova tends to get a bad rap in this space. In reality though, he is a spirit just like any other that can be employed for good or for evil depending on the proclivities of the practitioner.

Imposter of what? YHVH is shorthand for the ineffable name of God (the All, the Universe) whose true name is I AM. The Tao that can be named is not the eternal Tao, and all that.

Impostor of God. And of course I know what JHVH stands for, problem is that it seems for some people some other entity than God answers when you call Jehovah (perhaps all the times) and I have never heard of people calling God having this experience.
It would be interesting if anyone who have had one of these bad experiences with Jehova could call him with the Seal of Manifestation lying around and see if the result is different. Same experiment with calling Lilith too would be of interest. 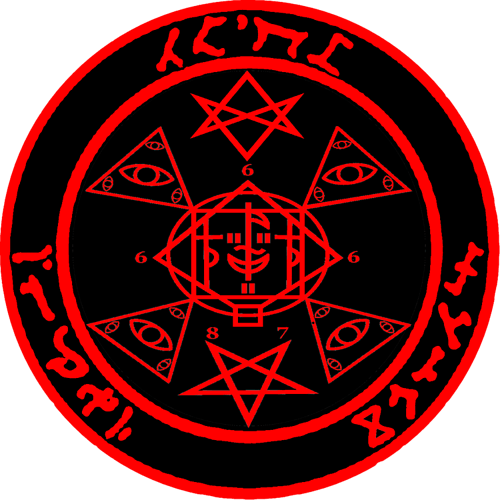 Impostor of God. And of course I know what JHVH stands for, problem is that it seems for some people some other entity than God answers when you call Jehovah (perhaps all the times) and I have never heard of people calling God having this experience.

Well, this is the fork in the road for me. I consider God to be everything that exists. Even an imposter or parasite would be of God (although lacking true power). Although I don’t doubt there’s some egregoric thoughtform of God made by Christians and the like: Jehovah, Yahweh, El, Ialdaboath. I don’t personally believe God can be reached through outside means, like evocation. Only by looking inward.

His history confirms this, as he was originally a god within a pantheon among the early Jews and among the Canaanites, who was not even the highest therein. Still a powerful god nontheless of course, and with him as a deity that is significant in its own way, so I don’t mean to downplay the significance.

However, I do believe The One can be reached through the name of YHWH if you direct your prayer to The One.

And the ancient sages did pray to God (The One). The One is all things, or rather, all things partake of The One, but The One also exists in a highly pure form of which we are seperate from (although not seperate in the ordinary sense of the term). The ancient Hermeticists performed prayers to God.

Just read in “The magick of Astaroth” by David Thompson, that Astaroth says that she, as Asherah, had Yahweh as one child of many with the Ugarit god El. This could explain the capricious ways of the Old Testament God, if the New Testament is rather about the real God - a loving god.

Btw, I also have these thoughts about the islamic god Allah, considering the viciousness of the Sharia laws and several passages of the Quran. I seriously doubt Allah being God therefore and also after having read of the Saturnian spirit Pherishel complaining about Allah taking over after the followers of Muhammed threw out and destroyed his and the other old gods’ stones from the Kaaba.

The Truth Of The Crooked Man - I Faced Him - Spirits, Evocation & Possession - Become A Living God

I’m not the biggest fan of accounts like that. I don’t give much validity to it. I don’t believe Astaroth is Asherah. And Asherah seems to originally have been the wife of YHWH, and the Jewish tribes did not look favorably upon incest at all, so it’s highly unlikely.

In any case, the ancient Jews did not see the actions of YHWH in the Hebrew texts as unjust. Rather, they saw it as just. The Romans and our modern worldview simply see it a different way. At present, we do not favor the kind of acts displayed in those books, and this has been subject to change many times over in history.

In any case, I’m doubtful of the “New Testament” god being The One, that is perhaps what they intended with the Jewish culture being influenced by the Greeks, but keeping the previous mythology seems to make some conflicts.

But with YHWH being the Son of El originally, this to me is clear, he is a god, a Daimon (not a Demon), and so he himself is not The One.

I have said this elsewhere but I also view Allah in the same way, as he was a diety within a pantheon, but I do not know what his worshippers believed of him.

Jehovah is not the name of the Old Testament God. YHWH is.

YHWH is not a name that is pronouncable, to call on YHWH you must visualize the Hebrew letters Yud Heh Vav Heh as seen in the tetragrammaton. His name is not speakable, as much as people want it to be speakable.

Jehovah/Yehovah/Iehovah is the wrong name because its simply not his name.

Written Hebrew, like many other Semitic languages, does not have vowels. So a lot of Hebrew words end up looking like that. YHWH would have almost certainly been pronounced with vowels, but since his name was removed from the texts, the later Jewish scribes who copied the manuscripts with vowels added did not include the name of YHWH, to my knowledge.

And your right, but the vowels we have for Jehovah or Yehovah or Yahweh are merely guesses. Atleast thats what i heard.

Yes it’s simply a reconstruction. But a reconstruction is far better than a mere guess. However, Jehovah would be an inaccurate pronunciation in the English way to pronounce it, as Hebrew does not have the “J” sound. To my knowledge, that way of writing YHWH came from a German translator, and in German the “J” sounds similar to “Y”. In the English-speaking world it got mistakenly pronounced with the “J” sound due to how it is spelt. But a “Y” sound would have been far more likely.

I agree. J wasnt even introduced until like 500 years ago. Lol

Spell out YHWH in Hebrew and you’ll see why they say he is the one. A hint it has to do with sex

Are you referring to the appearance of the characters or the sound of them?

you must visualize the Hebrew letters

Do you this properly a person would visualize the letters in the order of: Heh Vau Heh Yod
Meaning from right to left?

appearance of the characters

In that case, you should know that Hebrew isn’t the first language his name appears in. It first appears in Phoenician script, from the Mesha Stele, with the Paleo-Hebrew script at the time writing the name the same way. It looked like the text at the top and center (With the later Hebrew spelling at the bottom): 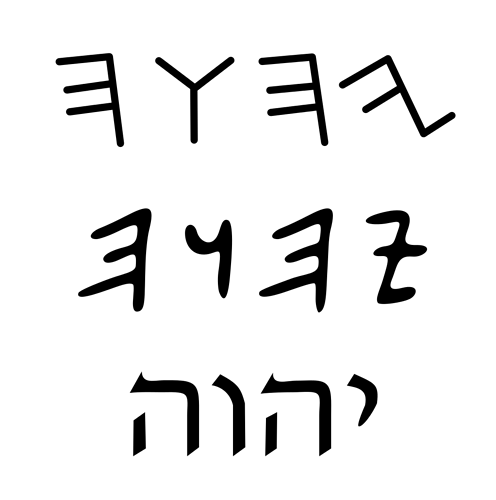 So the earlier way of writing it loses all resembles of anything sexual.

For Cathars, Yhwh is non other then Yaldabaoth.

The earlier writings did not elevate YHWH as the creator god right? Neither were they jews were they?

You stated yourself that he was a son of el before?

For Cathars, Yhwh is non other then Yaldabaoth

Where did you find that info?