I feel like I am a God not to be disrespectful of the Gods. I would say I am a Mage argent as can be full of power yet so glories with power comes responsibility I have recently spoke to Jehovah he said to me he will trust me with lots of power. He spoke throw me telling me all these good thing. It is good to have one of the most powerful GODS on my side I personally what to speak to the most powerful mage on this form

The soul is the key to open the gate I would say more power,more power vision of life is self. I know things about every one it is like the web of WYRD.

While a lot of perfectly normal magick may seem crazy to ordinary people, the claims of superior ability or knowledge without any work from you to back them up are a bit of a red flag.

I saw what you did there.

It goes perfectly with outcast part of me is not about how when or what ever. I am doing nothing. yet all at arms in the air for **** sake man I only get the the half of I am not reading this trow sorry about the peelings mas tack to it he sal ash to vggron.

Well, WILL is everything. An intelligent RHP spiritualist can WILL all curses away. So yes, very powerful.

Unfortunately, the RHP is limited because followers are not allowed to do certain things.

They are both just as powerful, because in the end, the most powerful magician is the one that has the strongest will.

I understand that you may disagree, and I will not argue with you because this part of the forum is for white magick. Your opinions are just as important as mine, and you make this place better for being here.

I am not reading this trow sorry about the peelings mas tack to it he sal ash to vggron.

Mr Flood seems to have entered realms mere mortals cannot comprehend, so I’ve temporarily relieved him of the responsibility of posting here for a few days so he can ascend in peace, and I’m going to lock this to prevent it turning into a dead horse – OP if you want it unlocked upon your return, to perhaps add some context or clarification, PM me.

To paraphrase Manly P Hall, some adept alone can believe themselves an all powerful magus sitting while in solitary, , no one else who knows them can see it or conceptualize his abilities or perceived gift’s, the adept has deluded himself , trapped himself into a mental prison of his own making.

I’ve had voices saying "sweet child you are an angel, when pressed for more information, the voice became distant and drifted off out of ear shot, another telling me I was a Nephilim, they disappear quick enough when pressed for real wisdom other than bs affirmations and wishful thinking, practically ego stroking malevolent government agencies using frequency weapons, always question any spirit who comes to speak to you, especially when you didn’t call them, sorry but its very foolish to just accept any entity at their word without further inquiry or even a bit of prophecy , something small.

I shared my “kitty box” idea for this kind of thing, even outside black magick it happens to a lot of healers, psychics, basically anyone who contacts spirits will get something like that at some stage, and you need to be aware (basically, that you’re not unique in being told these things) and also, know how to handle it.

This is my usual method:

If you do magick long enough, eventually spirits will tell you something so utterly fucking bizarre, about yourself, your place in the universe, the people in your life, or the nature of reality, than to run around sharing that information would render you plainly, to the rest of society, a raving lunatic.

This is especially common if the bulk of your work’s done in the astral, where epic battles, grandiose titles or claims, and massive archetypal events are normal occurences

Because the methods I trained in were based on travelling in the astral realms, I’ve seen people lose it, badly, over this type of stuff – taking it on board and then trying to convince others, or escalating it in their own minds into less and less probable scenarios, until they create a major alienation from the rest of society (including friends, family, and partners) because they’ve allowed it to fill their waking thoughts and also insist upon it being recognised by everyone else.

We more or less all get this kind of info at some point, and I’ve created an idea I call Schrödinger’s Compartments – after the famous thought experiment with the cat.

In that experiment, the observers don’t know whether the cat’s alive or dead until they open the box to observe it – my Compartments idea is based on taking this kind of wacky information, and sealing it, so to speak, in a mental compartment, where its veracity and relevence are not allowed to contaminate everyday life.

Unless you have a definite and pressing reason to observe and maybe act upon that information, whether or not it’s true/untrue (is the cat alive, or dead) is irrelevant – and obviously, when any part of you recognises you’re going to sound like a crazy person, there’s no reason to share it or (worse yet) start expecting other people to believe it, even act on it.

Schrödinger’s Compartments also mean you’re not tasked with trying to fathom the truthfulness (symbolic, metaphorical, or otherwise) of any given piece of bizarro-world information, and can simply file it away, in an intentionally indeterminate state, whilst carrying on with life.

You open that compartment only when there’s a genuine magickal need to do so, and take the actions appropriate to it, and then seal it away again in this indeterminate state where whether or not it’s “true” is completely irrelevant to the bulk of your life.

Again, this might not suit everyone, but if you’ve been told recently that you’re the King Of Mars or something, and realise that events throughout your life kinda do confirm that, you’re going to need some way to square that stuff with your normal life, and this is my concept of how to do that.

I’m working with/in a situation right now that would be majorly inappropriate to talk about, and alienating to others if shared because it basically defies belief on every level of normal experience, so that’s in a kitty box and I operate “as though” it were true when working with it, and then discard even the concept of that duality (true/false) when not needing to interact with it.

This is an important distinction btw, a kitty box isn’t about being discreet, that other big ole’ moggy the Sphinx has that one covered - the kitty box is to stop you wrecking your own little boat of basic functioning and poise on the rocks, over whether or not the things you are told, or experience, were “real.”

Results will speak for themselves in most cases, so the “is magick real?” thing is also already covered, but for information of this nature - King of Mars being my example above, or being an angel, Nephilim, being stalked by Santa Claus, whatever - those you need to be able to live with, and not lose your shit, if they keep on coming up.

That’s literally what I’ve been doing, you reading my mind, I’ve been talking about nearly word for word. Online or thinking it, I can handle paradox’s, no big deal, I quest on, they aren’t stumbling blocks just funny shaped pieces of the puzzle Il park off and might come in handy later, oh we are so in synch on here lately I freken love it, you’re a star.

Even as I type my keyboard is acting up,

I doubt he or antifa hacked your fingers…

If Connor_Flood1 has anything that makes sense to share, he will no doubt impress us, if not he’ll go the way of the handful before him who joined to either larp or waste folk’s time posting nonsense.

When you’re reminded of that one guy that insulted your dead Grandpa’s godform… I forgot he existed.

Okay guys, can we please get this back on topic to magick, and the OP if he wishes can expand upon his recent experience, but speculation about motives isn’t going in a useful direction!

If anyone has concerns about the motives of a member (because trolls and their kind DO exist) please don’t go round pointing fingers on here, it’s bad form, PM a mod and meanwhile don’t feed the troll if you think you see one, they’ll be gone soon enough once they show their true colours.

Kitty Box is just an excuse for people not to complete their soul work. There isn’t any real help for people outside free Mason nor secret societies it still seems. We have all this information but it’s all incomplete and mostly useless.

Maybe someone should write about their past lives, alternative timeline lives and alien lives…The great work is about bringing all of these missing parts together for a truly Aeon.

Kitty Box is just an excuse for people not to complete their soul work.

With respect, the concept of a “soul work” that can actually be completed is itself Right-Hand Path stuff, in that it implies a correct and only way to do things, and some definitive final truth, and rest, at the end of that work.

It’s the concept of a day of honest hard work ending in eternal slumber - fine for one level of reality, but not the whole picture.

I’ve been there, done that - there is No Thing, the observer within is the Creator (seemingly) without - the self is a fractured and limited aspect of the Self. That which is without, is like that which is within, in other words.

I’m just here for shits n’ giggs now, because there is no Great Work that “needs” to be done (needed by whom? For what?) and methods like this help me have more of that fun, by walking concurrently in realities and situations that are of a surrealist and non-linear nature.

With respect, the concept of a “soul work” that can actually be completed is itself Right-Hand Path stuff, in that it implies a correct and only way to do things, and some definitive final truth, and rest, at the end of that work. 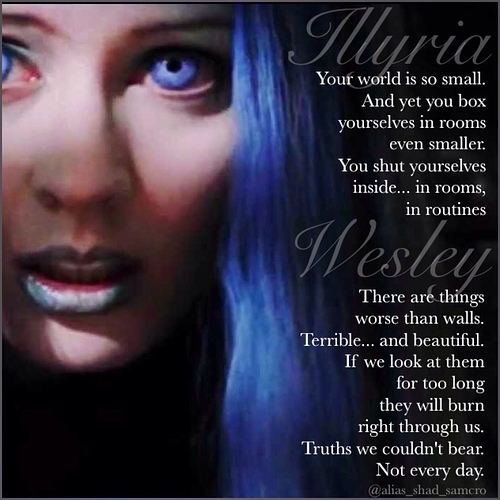