I will be going deep into the Sri Yantra

I have decided to go deep into Sri Yantra meditations in order to change my DNA and vibrational patterns. I’ll let everyone know how this goes. This is exciting for me. I’ve never seen a symbol that has sucked me right in such as the Sri Yantra 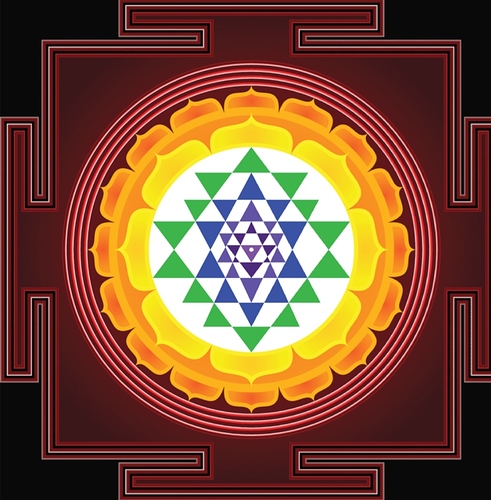 The Sri Yantra is a 12000 year old yantra formed by 9 interlocking triangles that surround and radiate out from the central (bindu) point, the junction point between the physical universe and its unmanifested source. 4 isosceles triangles with the apices upward, representing Shiva, or the masculine energy, 5 isosceles triangles with the apices downward, symbolizing female embodiement of Shakti.

This is a union of the Masculine and Feminine Divine. The 9 triangles all intersect eachother and in the middle is the power point (Bindu), visualizing the highest center and from where the cosmos expand, such aa ones third eye. The triangles are enclosed by two rows of petals which represent the lotus of creation and reproductive vital force. The broken lines of the outer frame denote the figure to be a sanctuary with 4 openings to the regions of the universe.

When placed together the 9 triangles are interlaced in such a way as to form 43 smaller triangles in a web symbolic of the entire cosmos or a womb of symbolic creation. Together they express non-duality. This is surrounded by a lotus of eight petals, a lotus of sixteen petals, and an earth square resembling a temple with 4 doors. There are also nine levels.

In 1984 Russians did a test using I forget exactly how many volunteers. They watched the brain waves of each person and had them stare into the symbol. The test results concluded that this symbol placed every volunteer into an alpha brainwave state within moments, and their brains began to create new nueron pathways. This actually indicates change not just on the subconscious level of thought, but on the subatomic level!

What you exactly do. Keep gazing at this yantra while focusing on breathing. Is it so??

What kind of mantras? An also… I have a strange feeling, that Sri Yantra is also sushumna nadi seen from side of muladhara. Attention on center will rocket your conciosness through sushumna above sahasrara. Such… my strange feelings.

Hey yeah it has some scientific evidence also even in every homes of hindu has sri yantra.
some experiment conducted in U K very long back. The story goes like this, bak in 1900’s one friend had a land of about 8 acres and it was barren land for so many years, he thought of selling it since it was barren land and its of no use. So another friend told him about sri Yantra and its significance, so he drew the big sri yantra symbol on his land and within 8 months that barren land became fertile land and then he can grow whatever he wish.

so? what happened to you?

i am crazy about this yantra since i touched it!

it’s in my sleeping room, at least twice a week a huge shadow being comes to see me when i sleep!( it wakes me up , it’s really huge to the ceiling!)

and i get so many unexpected positive stuff in my life since!

and when my 10 years old son meditates on it he sees a rainbow coming out of it!