The night before last night, I had a conversation with an entity. I was on my phone when I decided to lay down and close my eyes. I ended up falling asleep, and the next thing I know I’m having a conversation with this entity, not in a dream, nor in my room. It was as if I was in a different space all together. I don’t know the name of this entity. I tried to ask her but when she spoke it was just a bunch of noises. If that’s her name, and it’s incomprehensible to human ears then I have absolutely no idea on what to do. She said that I would be successful if I were to summon her. She spoke in mainly a female voice but time to time it would change, for example, become deeper, more demonic like.
I had asked some friends of mine to help and this is where I am at so far.
When I try to think of her name I always have something like “meph” or “mef” come to my head.
I also tend to think of Arachne when thinking of this entity.
Some other things that came around when thinking of her was - dragon, evil(Not in an antagonistic manner), queen, demonic, and goddess.
When I was speaking with this entity, I did not see anything but colors, and what may be a figure behind those colors. The colors were similar to fog, but in the color that is it. There was black, red, and maybe purple, and some other colors. I can’t remember the seen all that well. That’s what I saw in the moment. The more I think of this event the more I feel and see that there is an entity behind it all. It was definitely a female, and she wore a crown. It wasn’t your typical golden with a bunch of jewels crown. It was more like a ancient, japanese castle tower thing. That’s what it seems to appear as.

I apologize for the very rough explanation, but there’s not a lot to go off of.

What I would like help with is identifying this entity.
A divination method perhaps, or if anybody can derive anything off of this explanation.

I’m not sure, but I’ve heard lots of folks say something along the lines of “if a spirit shows up uninvited, it won’t end well.” Maybe that’s not the case, just be careful.

I’ll keep that in mind, but I didn’t feel any malicious intent so I think I’ll be fine. But I’ll be cautious regardless.

I’ve heard of a Mephistophina. Perhaps it’s her. I don’t know much about her though. I would tread lightly. Trust your intuition.

I’ve never heard of this being. Perhaps it is her, though I don’t really understand why an entity unrelated to me would want me to contact her.

This is very similar to how Gremory first appeared to me. It even sounds like how she manifests, somewhere in between a dragon and a woman.

Although there were no colors, and no deep voice.

Are you lonely in life and seeking a companion? Or perhaps just seeking something in general that you may or may not be aware of?

Are you lonely in life and seeking a companion?

You’re right on the money with this one.

I’ll let you know once I figure out who she is.

I found a binaural on YouTube with her name in it a couple months back. There’s actually several. I meditated on it a few times but I already have a companion so nothing really happened. I would ask her respectfully to be forward with her intentions before you do anything. She told you, “if you summoned her”.

Sounds like a calling to me. Best of luck and be safe.

I have sent you the binaural via PM if you are interested. I do not know the author’s credibility so again be wary.

I’m pretty damn sure I figured out who it is.
Mephala.
The goddess from The Elder Scrolls. 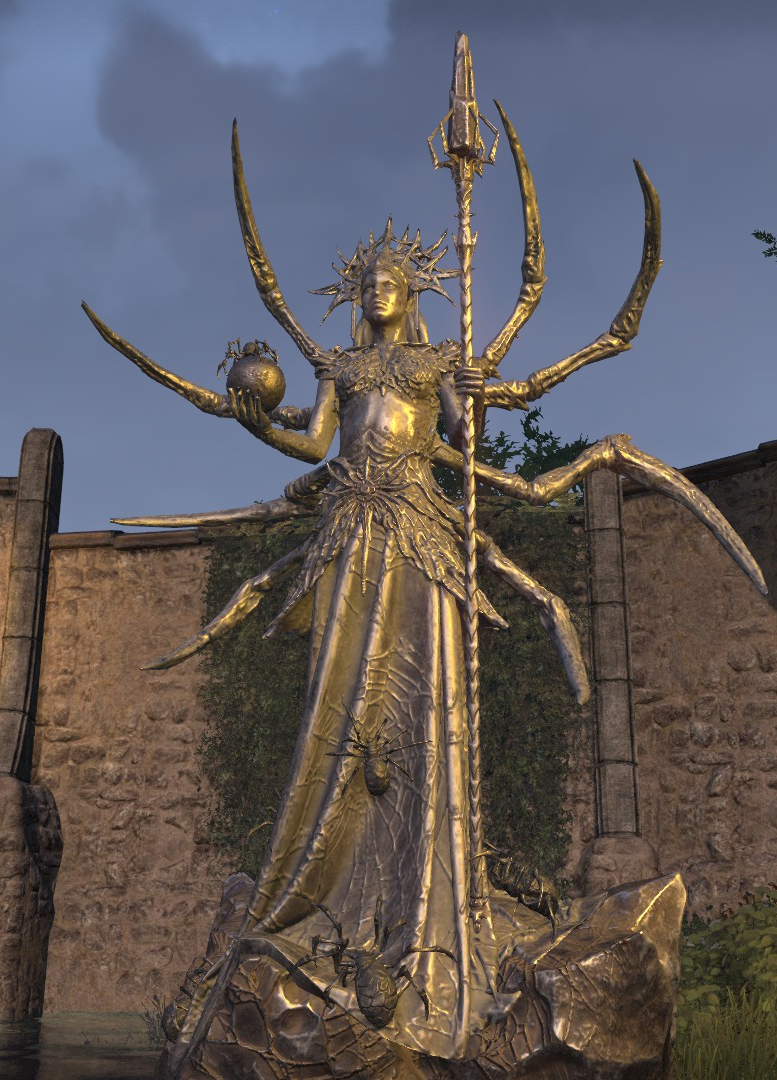 Mephala (Daedric: ) is one of the Daedric Princes. She is known by the names Webspinner, Spinner, and Spider, and her sphere is sometimes claimed to be lies, sex, murder, and secrets, but others claim her true sphere is obscure to mortals. She is...


I performed divination and got yes. I still don’t completely trust my divination skills so I may be completely wrong about this.

I was thinking how when I asked Nahema if she was that entity, she said no. So that made me think it was another entity. Lilith perhaps? No.

Then suddenly the name Mephala popped into my head.

If she is indeed the entity who came to me that would clarify a couple things:
The “meph” part, the goddess part(She typically appears as a female), the relation to Arachne(Mephala has a big relation to spiders, just like Arachne), by normal means people would consider her “evil”.

The name you are looking for could very well be, Ananke.

As for Meph, Mef. Mephisto. Yoda. (the joker). Watch out for pretenders. Tread lightly.

Welcome @Son-of-Serpentine It is a rule of this forum for all new members to properly introduce themselves, so please click the link below and tell us about yourself and any experience you may have in magic, such as what you practice, how long you have practiced, areas of interest, etc:

Thanks for the help, but I already figured out who it is long ago.

Can you tell me who the entity was?

Yes, it was Mephala.

You can give more information about mephala, its powers and offers… Or at least a secrecy to talk to mephala

There is no secret to contacting her. It’s just like any other entity.
If you want to read up on her then check this out.
If you want stuff like gnosis of her then let me know.