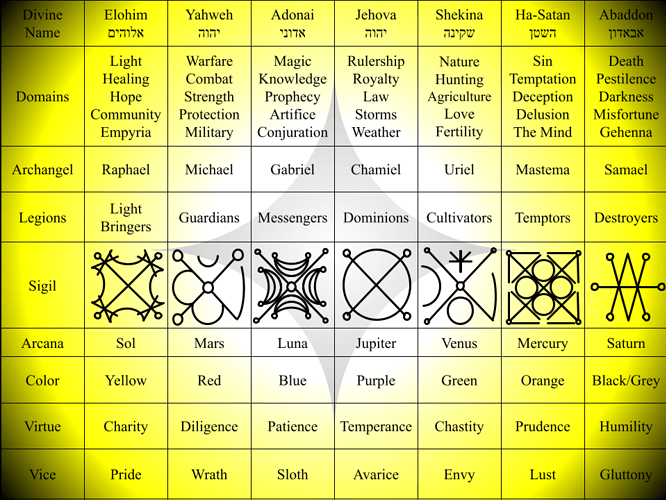 I tried doing this before in a different post and I guess it didn’t work. So, I’m going to try again and provide the context for the question. The table above is a magic system for medieval European-ish faction from a story I’m writing. It is entirely based off of their religion. Essentially, they invoke their god Theos through 7 divine names representing 7 different aspects of him. Each name is associated with several different domains, so using these names in prayer grants some form of boon or effect based around the domains of one of the names.

The story draws from real life occultism, magic, and spirituality. The general idea of the story is that there is the human world and a magical alternative world, both subtly connected to each other and allowing interactions between humans and magical creatures. So, I wanted to use real divine names. However, I’ve recently decided to use some lesser-known ones.

And I’m here asking for ideas. I want to keep Ha-Satan and Abbadon, but I can replace the other five if there’s anything better.

The general idea of the story is that there is the human world and a magical alternative world, both subtly connected to each other and allowing interactions between humans and magical creatures.

In Harry Potter, Rowling juxtaposes the extraordinary against the ordinary. Her narrative features two worlds: a contemporary world inhabited by non-magical people called Muggles, and another featuring wizards.

Fantastic Beasts and Where to Find Them expands on this idea in the 1920’s United States with a Magical Congress of the United States (MACUSA) where American wizards are forbidden to have any contact with No-Majs (non-magicals “No-Maj” or “Muggles”).

I’m not big on Harry Potter, so I’m not really sure how she structures her world. But the notion of a story involving a mundane human world and a magical one isn’t unusual. Nor are stories about magic schools. However that’s beside the point.

The point is I need 5 names of God that can be used to correspond to the first five categories in the image and that are not well-known names. So, please offer some suggestions.