How in the world do you get started?

I’m extremely interested in Vodoun but have no idea how to get into the practice since initiation is necessary. I’ve been interested for a while now, as I wanted to wait and make sure it wasn’t just a passing thing, but now that I’m absolutely sure I want to get into this I have no idea where to go. I make offerings to Lebga to open the gates into the religion for me, but I don’t expect a houngan to one day just show up standing on my door step without me doing anything. What should I be doing / looking for in order to get into this?

I’m extremely interested in Vodoun but have no idea how to get into the practice since initiation is necessary.

No it isn’t. Who told you that? Most people who practise Vodou are not priests. You do not need to be initiated to serve most of the Loa and to reap most of their benefits. Most of the things you can’t do as a non-initiate concern tending to the spirits of the house and performing functions for the community. Only certain Loa with whom you’d only need or want to work with if you were a priest require you to be initiated. Do you understand? Vodou is no different to any other traditional religion like Catholicism in this regard. It is only logical. To legitimately act as a priest you need to be legitimately initiated as a priest!

I've been interested for a while now, as I wanted to wait and make sure it wasn't just a passing thing, but now that I'm absolutely sure I want to get into this I have no idea where to go. I make offerings to Lebga to open the gates into the religion for me, but I don't expect a houngan to one day just show up standing on my door step without me doing anything. What should I be doing / looking for in order to get into this?

Keep looking. Find a houngan or mambo to give you a reading and find what spirits walk with you at this time and how to serve them. Ask around. The road will open when it is meant to.

Poete wont be surprised I dont agree with him. We already discussed about it in the past so I wont detail again.

Initiation is necessary for various purposes when it comes to ATRs.

However, Poete’s advice is good : you have to find a Priest(ess) so that you have a reading done with familiars spirits which are walking with you.

Once the reading done, the Priest(ess) will tell you what spirits recommend and how you shall proceed from there.

[quote=“The Eye, post:3, topic:2247”]Poete wont be surprised I dont agree with him. We already discussed about it in the past so I wont detail again.

Initiation is necessary for various purposes when it comes to ATRs.[/quote]

And you’re absolutely and incontrovertibly wrong.

You do not need to be a PRIEST to practise Vodou and serve the Loa. END OF STORY. I have never undergone the Kanzo, yet my experiences with these spirits as my own serviteur and the results I have achieved fly in the face of your initiatic claims. Complain about it all you like, reality couldn’t care less about such opinions. And this FACT of initiation being unnecessary is PROVED objectively to all those who haven’t tried it for themselves by the FACT that most Haitian Vodouisants are NOT INITIATES and never become houngans or mambos, just as most Catholics are not priests, and are not barred from communion with God, Christ, Mary, and veneration of the saints because of it. In fact, you don’t even need to be an initiate to lead a service in Haiti. The very idea that the adherents to a religion are going to all of them, or even most of them, be members of the priesthood is absurd, and is not found in any religion I have ever heard of, whether African or not. This is a ridiculous Western misconception about Vodou as its practised in Haiti, no doubt spun by charlatans who want to weave a mystique about the religion and stake your money from you for bogus initiations of embarrassing white hippies into bogus cults. Oh, yes, for sure one has to in theory become an initiate to learn various rites and techniques and secrets, there’s no doubt about that, and it’s even understood why such protections on the knowledge would exist. But for the adept magician there are other ways of discovering such things without signing himself over to some master. The Loa are older than Vodou, and older than any lineage of elitist twats thinking that most spirits even still give a rat’s arse about a system of initiation that originally demanded ties of blood ancestry has become so diluted as to be nearly meaningless. There is no more to say regarding this issue.

None of your arguments were convincing to me. Therefore and as you said, end of story, le débat est définitivement clos sur ce sujet.

Poete hit it dead on bro. 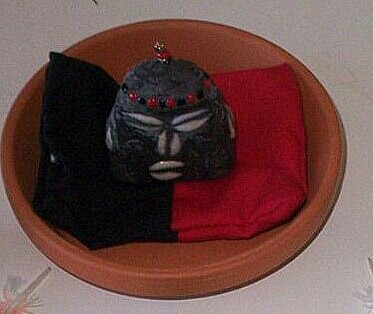 Serell, why do you have an Ellegua head, saying “exu loves you”, in a voodoo thread?
Ellegua is an ORISHA from SANTERIA. Exu is a class of Spirits from Quimbanda.
Voodoo is Haitian, Santeria is Cuban, and Quimbanda is Brazilian.

I know, but the essence behind the masks I beleive that Elegua/Legba/etc. Are the same entity. The Exus of Quimbanda may very well be a different class, but in Santeria Elegua is also knownas Exu, depending on how traditional ones godparents are. One is in fact taught that Elegua is one and the same as Lucero-the gatekeeper in Palo Mayombe. Elegua has many different aspects which are known as Exu. For examle Exu Laroye hides behind doors, Exu Alabwanna is the Master of All Roads. Everyone has a specifics Exu that walks with him or her just as in Quimbanda his female balancing force Pomba Gira has an aspect who walks with us individually. You are right though on the whole Santeria in a Vodou thread though.

Yes, but Exu is a legion of different spirits. Ellegua is a single entity. And not every single exu has offices relating to the opening of roads. Perhaps those on the kingdom of the crossroads, but again, not all.

Exu was actually the original name, Elegua came about through the cross integration of Yoruba language with Spanish and traditional Islander dialect. In Africa, Elegua is recognized as Exu, anf being the same. You can see where Elegbara became Legba abd so on.

Exu in what sense? Orisha Exu?
Orisha exu isn’t the same as the exus of quimbanda and Umbanda. Like I said, Exu is a class of spirits, there are many legions of exus. There is only one Ellegua.

Exu are a class of Orishas and a class of (masculine) spirits in Quimbanda as well, hence the confusion.

Ellegua is not Legba. They have commonalities but are not the same spirit contrary to the popular belief.

The Eye, Ah! I misunderstood Serell then. My bad.

No prob Euoi, all this I admit is confusing

Yeah it is a bit confusing. Sorry I started it all (hehe)

[quote=“Euoi, post:14, topic:2247”]The Eye, Ah! I misunderstood Serell then. My bad.[/quote]from what i know exu is a camino path of elegua almost like a different flavor aspect of Elegua. I dont know enough about it to give qn in depth explanation of it. I know in palo Lucero and Elegua are similar but alot of Tatas male priests in palo or yayis female priesteses in palo will tell you that thats not true. The whole thing with not being iniated in voodun was foriegn to me because you wont get taught anything unless u are iniated un palo. But voodun isnt that way. Theres so much misinformation out there on the internet and just in general. Ive heard of people being taken for 1000s of dollars and getting fake iniations. The first thing u need to know is if its there only source of income. Thats always a flag for me.

If Koetting is right, then when you are ready and meant for it, the Houngan will find you.