Found this skull in a field near my home. Was thinking about and still plan to house a spirit in it. Like the goat skulls koetting has. Are there any tricks to doing this or different methods… 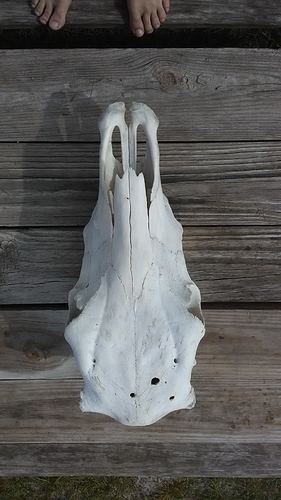 When you evoke the spirit, structure it inside the skull instead of in the incense like usual.

Is it a horse skull?

Worth finding an associated spirit for it and using it as a house for them, yes. It’s so lovely and clean looking!

Thank you I wasn’t sure on how to approach doing this.

Yes mam it is and I bleached the hell out of it ima paint it and post a pic after the ritual tonight.

Oh wow! Now THAT is a nice find! I am a bit jealous! Not in a bad way though. I am happy for your good fortune! But I have been wanting one of those for a while! It is the same as connecting an entity to a crystal or pendant. Focus and intent. I would light incense and candles and summon who you want to give it to and ask them if they would mind being connected to the skull to use it as a vessel and portal to you to make summoning easier. I have serious issues with people trying to trap an entity in something. Connecting their energy to it is completely different. When they agree direct their energy to the vessel. I would not try to force a being to a vessel because then you have a trapped, powerful angry being on your hands. But that’s just me. I have my own ways of working with them and find respect works fine for me. Have fun consecrating and dedicating your new find for magickal use! I hope it serves you well! Next one you find is mine!! Lolol!

Yeah I’m against trapping spirits and I didn’t want to bind. And of course you can have the next one, the pleasures of living in the country.

I see! I wish I could walk through the fields and gather things! Lol!

Take this here as a referance of what a spirit might expierience on the process of being traped into a soultrap.

Note the part of being pushed through into a different dimension, and having to adjust to it’s destinctive difference to the original plane of existence.

Now, that being said,
the most effective way i’d consider,
is to put the Sigil / create a sigil if needed, ontop of the skull, where the Agjna Chakra of the Horse would’ve been. (which really is above, between the Eyes.)
https://www.google.de/search?q=horsehead+agnja+chakra&source=lnms&tbm=isch&sa=X&ved=0ahUKEwjf4caXwJXaAhUOsKQKHZH0B-MQ_AUICigB&biw=1920&bih=943#imgrc=qIya0lrO-qKTMM:

Write a mantra you can use for binding the Deity into it.
Do it with some respect to the fact that the entity might co-exist in other remote locations.
For the actual possession into the Skull, channel the Energy which you harvest eather by a sacrifice or a Energy source (i’d go with a Bondfire by that skullsize, but you can try Candles for long periods aswell.),
directly through the sigil into the Skull.
E.A. gone further and covered the skulls with repainting in colors he felt matching.
I’d go a different step in between however.
I’d soak the Skull, after the Energy is bound into it,
by Saltwater (better of Ormus, but Saltwater should work aswell.)
Blood, if you happen to have enough aviable at a butchery.
If so, after the Blood Charcole powder (if mixed with Salpeter you seal it with gunpowder basically - don’t have any fire around by combination of those two.)
And finally, after those i’d cover it with a Layor of resin.
If you feel to add something, trust your intuition.

This however, allready constructs a very potent soultrap.
The Vessle can be further filled with ingreadients or carved into.
By carving, don’t forget to cleanly close the chipped edges with added resin.

Oh, and you can also let the Skull absorb Energy afterwards, by having it charged in a Spellcasting circle and housing the Entity during Ritual.

You speak of experience have you done this before

Not during this lifetime.
In a previous life, however, i had been very skilled in making and usage of Soul-bateries.
I harvested Souls and understood how to use them for specific work.

Blood, if you happen to have enough aviable at a butchery.

That would surely sink into the bone and stink?

it does sink into the bone and fuel it. for the ugly smell to be removed and locked away from the enviorment the rasin is used.

it does sink into the bone and fuel it. for the ugly smell to be removed and locked away from the enviorment the rasin is used.

Got it, what kind of resin would you use for this?

there is modern versions of resin you can use like a glas/plastic cover, hardening in a few hours after aplying.
for alchemical resons i’d advise coresponding resin which would be used to conjure the deity, for example black cobalt.
or Mhyrre, frankincense.
those however, need to be chemically altered to liquify and harden again after apling.
Melting them at low temperatures around 40 degrees and having them mixxed with alcohol directly after melting, may help doing the more advanced form of this.
But really my suggestion gone towards the modern combine two and let them harden out to get a plastic like cover, type of thing.

Ok, let me admit…
Yaah, i made use of a few soul cartidges during this current life.
But remotely accessing them, having one linked with me for a couple of month.
Not creating them currently.

a very potent way to have a skull inhibitly charged, once it had been activated as a soul trap, is cooking a secretly guarded recipe in it.
you’d need whine or beer, a thymus glend of an veal, some horn scraps from a bull, as well as ergot.
those are to be cooked 4-6 hours at least, better versions of it go up to 9 hours of cooking.
the missing liquid needs to be refilled every now and then.
In the end, you get a very strong essence of the hormones which where resident in the glend.
for spices nutmeg, parley, and bay leaf can be added, but they should only cook with it in the last half hour.
normally that essence is used in other rituals, or to fuel it later on.
Doing the cooking inside of the skull, however, imbues the energys into each other.
That, of course can’t be done with a rasined skull.

Oh and of course - don’t attempt to eat that stuff.
It can’t be diguested by humans.