Hi, do you know any banishment that does not require imagining colors?

I know what is the people’s answer

If you know, then why did you even ask?

Some time ago I almost believed that they want to help us but a few people told me that they are just pretending but they do not care much about people and even harm them in secret.

I am not here to offend you only to learn something
it was just an opportunist question
I apologize for this but I wanted to ask them, you do not have to answer anything and thank you for help in the Banishment case.
We can close the topic with the Archangels thanks for help.

Misconceptions are inside the religious systems and also in other areals.

Hence - the tip to go by your own intuition and senses is actually the best anyone can give you.

Regarding their fear - if you want to respect your families fears and worries, use Lumiel instead of Lucifer,
which represents similar light atributes, but completely within the RHP paradim.

Which brings me to the next point:

You didn’t state (as far as i’ve read it) that you plan a major protection working, ecompasing various generations of beloved people.

What you asked initially, was to get help for yourself,
which i had answered as detailed as i could.

Now, even tho i actually AM a Telepath - it’s not my job to guess what you might consider your planed course of action and goals.

Unless you tell me your question, how am i supposed to answer it?

And indeed, with those questions “is this a religious entity” - you’re not making many friends here.

Because, it’s exhausting, to explain these things again and again - ESPECIALLY when the people don’t want to listen to the answer anyways.

I know what is the people’s answer and I have read these posts but I still do not trust them why?

I hope you have success working with the stuff you originally asked for,
and my answers i have covered towards it.

Maybe take a day or two off the topic,
come back to it,
later on,
so you’re more relaxed -
and emotionally less attached.

Regarding the Major Family protection rite

I’m sorry about that.

Maybe open it as a new Topic,
so it’s cleaner and separated from this discussion.

I’d highly suggest to you,
opening it in the Category “RHP White Magick”,
so you don’t run into those concerns whether an Entity suggested to you is Infernal.

That section is specifically given to be focused directly on Celestial Energies and White Magick.

So you won’t have any infernal / Demonic Spirits mentioned there.

I am so sorry that you have worked hard and wrote it, thank you for help, but I do not want to have anything to do with archangels.

I’m sorry I could add it

Just want to point this out for when you come back to re-read the topic:

You’ve actually given 180° turned request here,
can you understand how that makes it difficult for someone to answer you in a reasonable way?

Also, in the long run, I highly suggest you at least get to know both pantheons.

You’re limiting your own potential extremely by constant avoidance towards one.
(even tho the public thinks it’s stupid or dangerous to work with both sides,
in the long run, you’ll do much better with it.
Heck, even the Bible says “Try everything, keep the good.”)

Do you believe in jehovah?

He sends people to convert and butcher pretty much any other tribe they came in contact with,
and thereby, he’s a pestilence upon this planet, which is proven by their Own literature (bible, koran, whatever you prefer.)

AS a living God, I deny any power that the petty trollgod is assumed to have,
for if there shall be no God besides him,
then it shall be for him,
to be cast into UTTER LONELINESS!

Do not be mad at me, these are just my questions.
Some time ago I almost believed that they want to help us but a few people told me that they are just pretending but they do not care much about people and even harm them in secret.

it was just an opportunist question

I am not here to offend you only to learn something

you do not have to answer anything

We can close the topic with the Archangels thanks for help.

I do not trust them, the end of the topic, I see no reason to be nervous about such a question, and then tell someone that he got angry and needs to cool down.
Let’s finish the topic of Archangels, please.
Thank you for the very good tips.

The LBRP in my experience relies heavily on colors until you are familiar with it to convey its meaning to your own mind. It can still be quite effective though lately for a lot of my bigger work I have adopted a series of rituals starting with creating a circle, LBRP, and then the headless rite. Should be said my version of the LBRP calls on elemental forces in their pure form and not angelic or demonic entities you can change this if you want but it makes color and symbols a tad more important to capture the power of the elements.

Often referred to as “The Bornless Ritual” or “Liber Samekh” in modern times, the Headless Rite is a powerful ritual that has gained no small following in the Western magica…


The Headless Rite itself can be a bit off putting because of its length but once you get into it it is very effective. I recommend you copy it down by hand into a notebook for easy access and to help you begin memorizing it and practice it routinely and whole heartedly throw yourself into the rite.
2 Likes
Adam_T February 28, 2019, 6:25pm #29

I must admit that I was wrong.
Lucifer Satan gave me a sign that the Archangels are okay.
he did not give me the answer literally only with signs.
I will admit that I would like to check the Archangel Michael himself
and if he will give me a sign.
Does he have something like his enn? Or maybe a prayer that calls him

Does he have something like his enn? Or maybe a prayer that calls him

Enns are only for demons.

Simply chanting Michael’s name can be enough to bring him near. Or you can open his seal.

You could try this. I did today and it made a difference in my environment and me instantly.

Link doesn’t work for me. 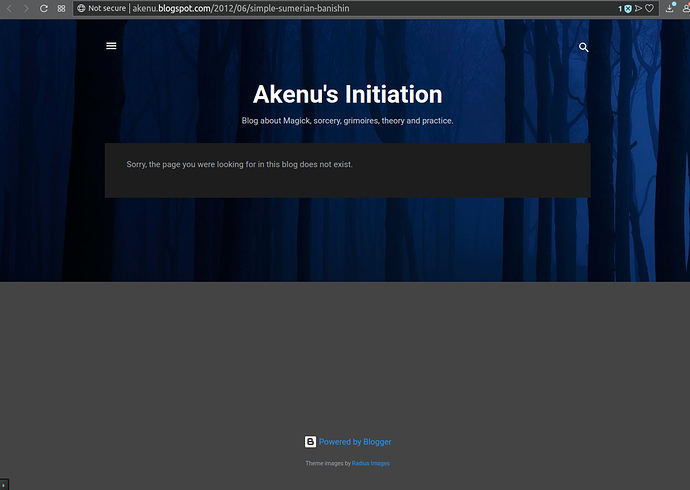 In this simple ritual we will call two entities that were given to Marduk.
Nariluggaldimmerankia, guardian of Igigi and Annunaki, enemy of all maskim and rabishu, and we will also call Asaruludu, ruler of the flame sword, giver of the perfect defense.

I am a bit tired now to give any more details, so here we go:

This ritual is very simple, words of power can be easily memorized and the whole procedure takes just a couple of moments. It’s perfect ritual to perform before you go to sleep, protecting you during the night and letting you wake up very energetic and happy.

@Donaldf973 Thank you for this, I’ve bookmarked it, and have started using this method. I only found your post today because the word BANMASKIM was loudly and clearly given to me right before awakening for the day this morning.