Over the next couple of weeks, I will be focusing on some healing aspects with Egyptian Goddess Serqet*.

Serket (also known as Selkis or Serqet) is an Egyptian goddess of fertility, nature, animals, medicine, magic, and, above all; healing venomous stings and bites. Her name means “she who causes the throat to breathe,” and as well as “she who causes the throat to tighten. In addition to stinging the unrighteous, Serket could cure scorpion stings and the effects of other venoms such as snakebite.

One of the most dangerous species of scorpion, the Deathstalker, resides in North Africa, so Serket was considered a highly important goddess, and sometimes she was the patron deity of pharaohs. She had a close association with the early rulers as their protector, most notably the rulers Scorpion I and Scorpion II.

As the protector against venom and snakebite, Serket was said to protect the other deities from Apep, the snake-demon. Also, since the bite from many of the venomous creatures of Egypt could prove fatal, Serket was considered a protector of the dead, particularly being associated with venoms and fluids causing stiffening. She was the protector of the tents of embalmers and of the canopic jar associated with venom. Serket gained a strong association with Neith, Isis, and Nephthys, who also guarded the canopic jars. Eventually, as the Egyptian pantheon evolved, Serket began to be identified with Isis, sharing imagery and parentage.

Serket was shown as a scorpion or as a woman with a scorpion on her head. It is unknown if she had her own temple, however she had a good number of priests in many communities.

Nefertari’s tomb has the following utterance to Serket:

Serket, mistress of heaven and lady of all the gods. I have come before you [oh] king’s great wife, mistress of the two lands, lady of Upper and Lower Egypt, Nefertari, beloved of Mut, justified Before Osiris who resides in Abydos, and I have accorded you a place in the sacred land, so that you may appear gloriously in heaven like Ra. 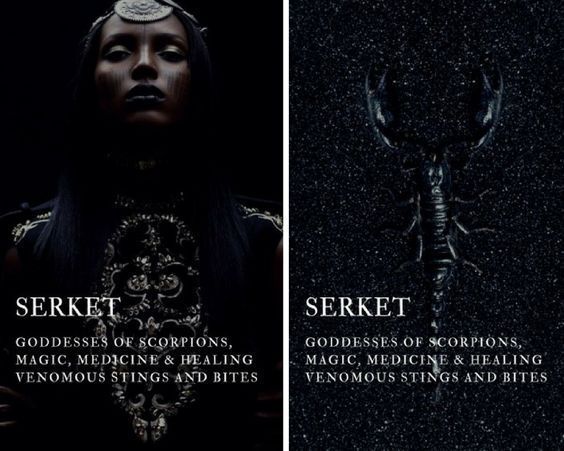 I am a little unorthodox in my approach to my own healing and magic. I will be working in conjunction with Goddess Isis in this approach - as I have some residual toxicity that needs to be taken out of my spirit.

I focus mainly within the Egyptian mythology and stories. Will be posting again soon.

Bill Duvendack has excellent books on Egiptian workings. Some of the most powerful Goddesses like Isis, Sekhmet are egiptian

Starting to heal the Throat Chakra with Serqet

[Serqet] is associated with healing, magic, and protection, and her name means “She Who Causes the Throat to Breathe”. (Source)

When your throat chakra is blocked or misaligned, you may have issues with creativity and communication. Throat chakra problems can also lead to physical symptoms like thyroid imbalance, sore throat, and hearing difficulties. It’s believed that chakra stones can rebalance this chakra. (Source)

Emotional signs that the throat chakra may be blocked are feelings of depression, anxiety, or low self-esteem. This may be worsened by being unable to express those feelings. A throat chakra blockage is often associated with the inability to speak. (Source)

I’ve never been one to voice my opinions and even when I felt I needed to, I would first apologize before starting what I needed to say. In retrospect, this was due to my low self-esteem in myself and abilities as a human.

Through the course of several years and standing up for myself, I’ve learned in order to have healing within the other chakras - we first need to heal our base chakra. This post isn’t about healing the base chakra - it’s about healing our throats to speak our truth.

By nature, I’m a very simple person. Yet, my brain, my thoughts, and my opinions make me a very complex human being. For years, I’ve struggled with mental illness, such as depression. I do rely on medication to help me cope on a daily basis.

For the past couple of years, I’ve worked on finding my own voice. Finding out about who I am as a woman - until I hit a roadblock. Who was I really?

On a very quiet night, while self invoking my higher self and praying to Serqet, the thought came: Take the poison out.

It was at this point I knew what I needed to do in order for me to speak my truth.

My next post will talk about taking out the poison

Here are the chakras of the body: 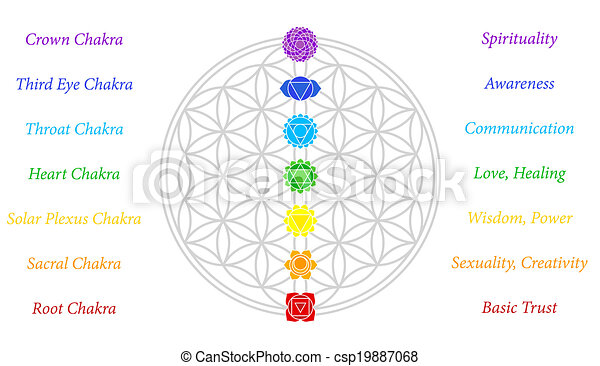