Has anyone heard of the demon named Abraxus?

Since the late 90’s I have been bonded to a demon named Abraxus. We have never had dialog but he communicated in visual mental blasts. But the last six years I’ve got nothing from him. So I am curious if anyone on here has heard of Abraxus?

Not the same spelling but perhaps? 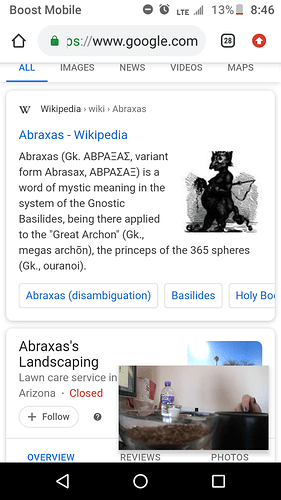 I only know a little about him.

Apparently, the phrase “Abracadabra” originally came from his name.

Yes thats him. Do you know anything else?

I know there’s theories that connect him to the ouroboros (the snake eating its own tail). And that seems call him the serpent king, I guess is a theory that says that ouroboros mean actually the serpent king and that’s him.
I don’t remember where I read this, some time ago I was searching about ouroboros and came across this. Maybe was with the another spelling: Abraxas. Don’t remember. That’s all I know that I can recall

I actually would like to know more abou him as well

couldn’t find much back than though.

From Encyclopedia of Demons in World Religions and Cultures by Theresa Bane:

Abracax
Variations: ABRASAX, Abraxas
It is likely that Abracax was originally a
Basilidean god that was later demonized. He appears
in Greek magical papyri and in Gnostic
texts, such as the Gospel of the Egyptian. The
name Abracax has been found engraved on stones
that were worn as magical amulets or charms and
depict him as a short man with snakes for feet.
After his demonization, he was associated with
the dual nature of SATAN and the word ABRACADABRA.
Sources: Brewer, Dictionary of Phrase and Fable, 5;
Cirlot, Dictionary of Symbols, 2; Collin de Plancy, Dictionary
of Witchcraft, 13–4; Dunglison, Medical Lexicon,
21; Hyatt, Book of Demons, 72.

Thank you for sharing this. It happens to be relevant to something I’m currently working on also.

Later on, I asked Nyx whether or not Abraxas was the Supersoul, and she told me that he was. In fact, she specified that Abraxas is a direct projection of the Supersoul into an avatar– a semi-sentient and theomorphic intelligence which can be worshiped, summoned, etc.