Ok , thanks I will ask that of Sitri next time and I have not worked with Asmoday yet, is that spirit the same as Asmodeus?

From my understanding yes, Asmoday is the name givin in the lesser key sigil is as thus. 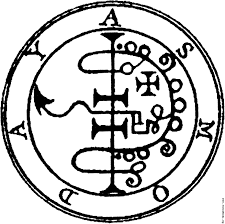 Also i can confirm working with sitri through invocation does have an effect on ones body, specifically an resulting in an incubus like effect on men, likely a similar effect for women if i had to guess.

Had a period of time i was working with um for something uncommon from what most call um for and this was an after effect of Sitri’s energy.

Belial… myself and many others on this forum have mentioned becoming a sexual monster when working with him. He is of the flesh and earth.

I’m guessing any demon with sexual ties. Asmoday, Sitri, Lilith, Naamah etc. Though in my opinion many of them have an intense pleasurable feel to their energy. Of those I have worked with the only ones who don’t slam me with pleasure to let me know they are there are Lilith and Lucifer. I believe that’s because they choose to appear to me more in a maternal and paternal way.

I was not talking about impotence lol

Sitri is the perfect fit for this. He’ll turn you into a sex god and bring the kink.

I was about to ask
What who’s Viagra

Personally, I recommend practice. Sure you can learn a lot from spirits, but putting what you learn into use requires practical applications, which means practicing with another person or yourself.

Read The Sex God Method by Daniel Rose. That and I felt possessed for a month or two last year when I was fucking anything that walked and had two X chromosomes. I was called a Sex God by the hottest girl I’ve ever seen and made her sore for days after our first encounter. How would one go about contacting a spirit that may have influenced me strongly at the time? It was otherworldly and I Was amazed and suspectinng I was possessed the whole time. I was by far my favorite version of my self I’ve ever been to date during that time

Asmodeus, Lilith… No enough words to describe it… U have to see and feel it urself

Welcome to the forum, @Husy. Please take a moment to click the image below and introduce yourself:

What does this even MEAN?

What does what mean exactly.

Basically creating a kind of feedback loop where sexual energies of the partner are stimulated then fed upon. The end result in my own case was i felt like i had a few grams of caffeine while my ex was out cold for at least 12 hours after.