The glaucous goddess Athena, native to the Attic land according to local tradition (with the invocation of Attis we see her even referring to cult inscriptions of the linear script B on the Acropolis of Mycenae, A-ti-ja, is the “Deep Wisdom” > about which even the Israeli Bible speaks, for which it is not tangible, invincible “Virgo”.
She was offered whole (fully armed) to the Universe, directly through the head of the supreme God and from the absolute Essence of the Universal Thought (that is, from the open head of Zeus who had previously swallowed / assimilated Mithida, according to the well-known myth). It should be noted here that until the fifth century BC, the word Sophia meant for the Greeks both the wisdom of the mind and the creative skill of the hands as we will see immediately below (Athena Ergani). The partiality of the God of Hephaestus (construction skill, Sophia half) does not allow him, as the legend is cleverly narrated, to meet completely with the Goddess Athena, however she adopts the product of his sowing, Erichthonios (It should be noted that in the Temple of Hephaestus in Athens erroneous so-called “Thissio” there was a statue of both the said God and the Goddess Athena Volcano)
In a capacity that dates back to ancient times, when Athena was a warrior and mother goddess, she is also the patron saint of cities (Polias, Erysipeptolis) and the female goddess of just war (Polemitokos) and who pays God Mars with one and her only blow) but also the Goddess of Self-Discipline and Endurance. She is the one who gave people the gift of Virtue (STATE HERO SEMNON OF GREAT ARETA) hymn of Proclus to Athenian Polymitin) but also of the Power and Self-Sufficiency of the Soul, long before the coming of God Apollo. She taught people the art of pottery (hence its name in the Pelasgian language: Athens, Athanas, meaning goddess of pottery) but also the polyhedral home arts (Ergani) and the prudent management of everyday things. She rewards the virtuous with Wisdom and punishes the blasphemers with insanity (hence Estroforos)
Some other etymological versions of its name want it to be created from the verb athrein, that is, to see it, or from the deprivation A-and thiin, that is, Athilasti. Plato’s rescue of the priests (worshiped as Neith in Egypt as the goddess of heaven, wisdom, weaving, craftsmanship, hunting and war, the great cult of Saida) to Solomon is evident. worship of Athena by the Greeks and also by the Egyptians, at least since the time of Atlantis.
Her Invocation ensures impenetrable defense against mental attacks and their return to the multiple, back to their source. The sacred color of the golden red (wisdom and glory) and its symbols are the goat (which symbolizes the power of the gods, protection, assurance), the spear (symbol of military bravery), the shield (common symbol with its Egyptian counterpart). Goddess Nyth, a symbol of the Power of Reflection, and more broadly of the protective female Power). Its sacred creature is the owl and its sacred tree is the olive tree (symbol of peace, immortality, fruitfulness, fulfillment)
It was sometimes misunderstood by Christians as the “Hagia Sophia” and was sometimes mistaken for a goddess of physical virginity. Maria as … 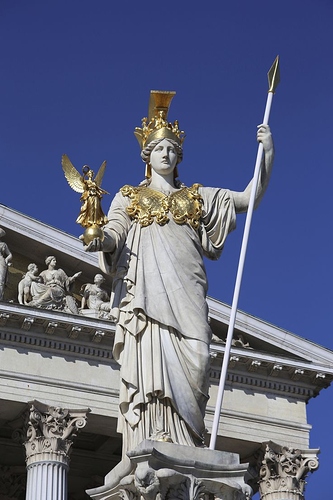