My mom has her papers in the fbi to clarify she didn’t commit a crime . I have a warrant out for my arrest. What demons can help me take care of my warrant and get my mother’s papers passed fast ?

For against the abuse of law enforcement you need Belial. Hope you didn’t do much crazy shit!

Ought to do the trick. He saved a friend of mine from going to jail due to some money laundering situation for the local branch of the mob. Basically, the DA turned his head around and told him before the session that he knew he’s a “good kid”. Ended up landing him a job in computer service from a friend of the DA himself!

To open a seal you merely need to gaze at it and breathe slowly, attentively as if any second now something would happen. You enter the trance by chanting his demonic enn, either by whisper or out loud.

The enn is " Lirach Tasa Vefa Wehl Belial ". There is no correct way of saying it, just repeat it until you find a comfortable way of doing it. The seal is: 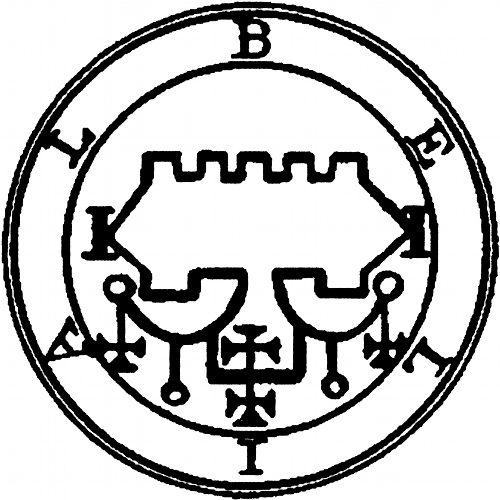 No need for the circle or the inscription of his name, it’s purely for aesthetic purposes, but looks nice. Look up EA’s video on Belial too.

Yea I talked to King Belial and King Paimon before . I think both of them saved me from getting arrested

Good luck, man. I’d skip into the woods if I were you until further notice. Sleeping on rooftops and going out at night is a wise decision as long as you can be sheltered from the sun. Should disconnect your cellphone while moving about and only use it when necessary, far from your residence.

Lol it’s only for jumping the turnstiles . I went into the precinct for a different matter you can read about on my other posts and I think both King Paimon and King Belial kept me from getting arrested.

AHAHAHAHAH YOU HAD ME WORRIED, YOU MONG

. Kay then, I’m sure B and P will deliver you from harm.

Lollll thanks a lot .

Bro you are THE BEST TROLL this forum ever saw.

To all other trolls this is how it’s done.
I had my suspicions from the I wanna be a prince days but always end up thinking nah just eccentric or different or stupid but this is finessing to a whole new level.

How is this “finessing” or trolling ?

If you wanna know what’s happening with that, you could pm me

Did you try talking to a judge after you spoke with Belial or King Paimon? In other words, have you given them an avenue to resolve the issue? A clerk is just going to say they can’t do anything over the phone and the cops are going to tell you to turn yourself in.

King Belial will help you with abuse of the law, but if you really skipped a turnstile you did in fact commit the crime. From what I understand from others he has a very old school sense of justice and honor. He might be inclined to teach you a lesson you may not enjoy if you attempt further subversion. Just a thought.

No I didn’t ask them to resolve the issue and I didn’t go to the court to solve it myself . I’m going Tuesday to do just that .