Probably something weird for a first post, but I’ve seen very few answers to this and none tend to be based on personal experience, just theory from those who aren’t in the same position.
inb4 “controlling free will is bad” I know this and I don’t care, the obsession is driving me too close.
Right now I am trying to seduce a guy in my class who, as far as I know, is straight. He knows I’m bi and also knows that I have crush on him, but despite my attempts has not faltered. I am now going to resort to magick, but am struck with a tinge of uncertainty that won’t let it work well in the first place. As far as I know, the seduction spells that exist are written with a huge heteronormative bias that is want of any clarification on whether this can work. Sigil magick has all but failed on other people. I am deciding on whether I should do a traditional work with candles and mantra stuff or summon a demon like Sitri.

Either way, the question that begs a definitive answer is “Can seduction magick work regardless of the object’s orientation and the agent’s sex.”

Please post an introduction in the proper thread here and let us know a bit about yourself:

It is one of the few rules of this forum.

Second: Do a search using the search function. There is an older thread asking this exact thing. Read it (it’s from a lesbian but it’s same thing, wanting to change someone’s sexual orientation).

The short answer, yes, it can work but it entirely depends on his strength of will in regards to his sexuality. If he isn’t the least bit interested than no matter what magick you use you will have a lot to overcome. Lust spells work best if there is at least some attraction to work with.

Sorry about that I must have missed it when I read the rules, I just posted an intro

The reason I’m asking here is because I also want to know if maybe I should try to contact something to find out if he has any level of attraction? The thing is I suspected he did for a long time because sometimes he would be VERY sexual towards me and not in a straight horseplay kind of way at all. I just want to be a little more confident in my hunch.

Can seduction magick work regardless of the object’s orientation and the agent’s sex.”

You’re probably gonna need to do a spell completely separate from a love spell to change their sexual orientation, afterword if you find success that is when you try again with sitri or sallos.

I’m no expert on any of this but I think it would be bad karma to actually try changing someone’s sexuality for your own gratification.

Look at things from a wider point of view, and show some compassion for others lives. This guy you lust after is likely straight and even if you was able to get him to like you would it last? And when things fell apart wouldn’t you be in a worse position?

I have my own opinions on such things and just feel it’s immoral and selfish.

If you supect that he might have had a interest in you at one point, I don’t think you really need a lust spell. I would try a glamor or a spell to increase your sexual attraction. Respark that intetest then work to enhance his interest. Then when the time is right pounce on that hunk of yours.

I mean Belial is very well known for doing shit like this soooo… There’s that. He can switch sexual preferences or tastes.

Not in my experience. Theres plenty of us who have killed without second thought with magick…

Ah, there’s the issue. Your morals. Most of us got some rules of conduct, but I don’t believe we should hold others to them.

Considering I tend to think sexuality can be rather fluid, it wouldn’t impact my moral compass to work on this. I would ask Prince Sitri for assistance as he’s more sexually open and promiscuous .

I’m new to this and still learning to “uncondition” my ways of thinking.

It’s actually quite freshening you saying that many have killed using magick without a care.

Maybe not what you want to hear, but there’s an article in Anthology of Sorcery 3 where someone did the same thing and it ended very badly. So be careful. Many straight men would be ashamed of sleeping with a man if they ever did it. That’s just our culture’s programming. If you succeed, respect him and his ego if he is worried about his reputation. What I mean is if he says, “Don’t tell anyone.” I know that if I ever found out someone manipulated me to fuck them against my will, I’d be fucking pissed and would get my revenge.
This is not a “you’re violating moral laws” post. I’m LHP… I don’t care about any of that. I’m just making you aware of what could happen. 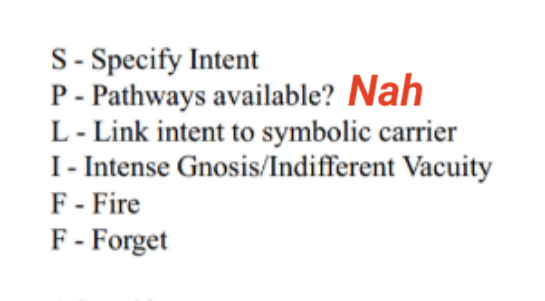 yes. It works. I’ve done it…twice. Both times were intense affairs that were short lived and crashed catastrophically with a lot of hurt involved. Why? Because I was working magic against a person’s nature thus the result, while real, was fundamentally unstable.

So in short, yes it works but the price is high for such short lived pleasure.

That’s kinda what I was trying to put across, the pleasure would be short lived followed by a shit storm basically.

If attraction spells have heteronormative bias than reword restructure them as needed. Not all that difficult.

I’m new here as well, so I’ll introduce myself soon. Just for a record, I live in Holland and English isn’t my native, so to let you know that. Well, hi everyone!

Back to the topic, I’m in pretty similar situation. The difference is, I never saw my target in person, he’s married to a woman and I know 99% he’s bisexual if not gay in a closet. Just for a record, I’ve been married but I consider myself gay.

First of all I know you can influence him by your will but it has to be hell of powerful will. You know the phrase about strong desire… So, I don’t want this guy to divorce or to hate his wife, I want him for sex and some other benefits. He’s young politician and all I want is a friend with a benefits.
I’ve called Sitri and Lord Lucifer. I’m also veeeery new in scrying, so I still only practice scrying mirror. I’ve tried evoking Sitri first and I saw nothing, heard nothing. After that, I’ve made Lucifer’s sigil with a few drops of my blood on it. Very first day gazing, I’ve opened it. Lines have disappeared but the other day gazing, sigil started shining, I saw a beautiful light all within and around it. And I felt such a deep and powerful love. Now I call him father. During the same day I’ve asked him to give me just one sign he’s here. After a few hours I went to the kitchen and I turned on the light. After a second, the light went off and again on and off and on. So I knew it’s him.
I also draw Sitri’s sigil and offered him a few drops of blood. After gazing it was kinda half of success. I just wasn’t sure but I told him: Ok, if this it you Sitri, make that man write me on fb. (We were not friends on fb and I’m not a member of his party.) And I said, just let him like something on my site, anything because if you want to help me you can do that. And I almost forgot about that. I think it was next morning, I was looking what’s new on my fb and there was a new notice. I must say I REALLY wasn’t that sure something like that would happened. It was HIS invitation to become fb friends and me to like his page, too. He liked 2 of my posts. And yes of course I’ve accepted it

The same evening I saw him talking something on TV and he was talking from aside, he wasn’t looking at the camera, not for a second. I just called Sitri in my minds and the name of this guy and then I’ve concentrated deeply from my 3rd eye to his 3rd eye and I was repeating in my minds, demanding him to look at me. For 2-3 times but it was very intensive, using all my force. He moved his body and his head to this camera in the corner and was looking a bit confused, distracted at this camera (my eyes) for twice. And I knew. I just knew - that’s it. Yesterday evening I’ve made our special sigil and it opens a bit slowly but hey he’s married and not even in my city. But veeery soon I will be there and work on it more because I have a goal. So, yes man, if you are serious, I mean if your desire is THAT strong, you can do that. But imo it’s shouldn’t be only to satisfy your ego saying something like now I’ll use him and leave him. Success! Btw am very happy finding this forum. And even more happy since when I said to me: g’d bye you selfish “almighty” creature somewhere above the clouds.

To be honest it’s not really worth it because its going to be a temporary fix, he’ll get hot with lust sleep with you once or twice then drama starts and he’ll break your heart all over again. So instead of that try an attract someone on your wave length aka someone bi or gay who’s already out and is willing to give you a go for who you are. there are open ended love/lust spells to where you can call upon the qualities you want in a lover.

Does anyone else find these sort of requests akin to rape in a way?
My response is work magic on yourself to be irresistable, and better than most in a few ways, and receptive to outside interests. If your class hunk notices it and is down with it, then, game on.

If attraction spells have heteronormative bias than reword restructure them as needed. Not all that difficult.

Yes but it takes more than that.

You’re probably gonna need to do a spell completely separate from a love spell to change their sexual orientation, afterword if you find success that is when you try again with sitri or sallos.

Yes and No. Bind them from the opposite sex and any opportunities for a heterosexual relationship. Then bind them to you. Cast the lust spell and dominate their life. I’ve done this before.

No one asked for morals. Either quit commenting or actually give him something useful.