So, as a part of The Pact that I entered into, I was gifted a succubus that would help to deal with my sexual urges. Well, last night, I met her. And as we were talking, I asked her what her name was. Unfortunately for me, her true name is completely unpronounceable by mortal words. And, try as I might, even in the Ethereal world, we just could not get me to pronounce the name. Simply too many s’s. So in the end, we eventually came up with a compromise and we shorten her name very similar to leeloo from The Fifth Element. We must have worked at that name of hers for at least an hour. Either way, it was her idea of the name, so it still has the full effect. But it was a lot of fun trying to figure it out. We laughed a lot.

Are your psychic senses all open? Clairaudient? Clairvoyant? Clairsentient? With who did you make a pact? 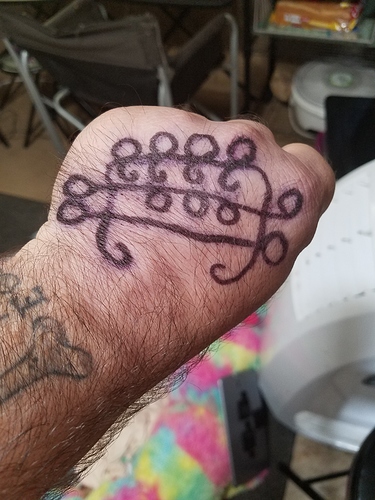 Astaroth and Prince Orobas had a hand in it as well.

It is a temporary pact meant to try my resolve. But the results so far have been incredible.

Part of the pact is to maintain King Paimons sigil on my hand as a devotional for 16 days. My job will just have to deal with it.

I’ve always been claireaudiant, but the rest have been dormant for a few years.

I’m a natural energy worker, and aura healer, I have a ton of time in on the RHP being a good boy.

Do you get paid as an aura healer or energy worker? Or is it hobby stuff? Also is it true that the rootcause of all illness lies in the aura being “broken” etc?

That you could literally cure your body ailments by working on one’s aura?

Okay, I guess it’s time for storytime with Sico. I was at a bus stop once, having only $5 to my name. I happen to be sitting down right next to a guy who was obviously attached to a bicycle that he was holding onto. I decided, mainly out of boredom, to check his aura, and I saw that his Aura had a large crack hit over his left leg. I asked how he broke his leg, he asked how I knew, I told him I was psychic, then I offered to heal his leg. The brake had caused psychic trauma to his leg, and it was still giving him grief over seven years 2 the point that he would actually considered giving up bike riding. At the time, I was fully immersed in being a good guy, healing, divination, spirit and Aura communication, once he agreed, I went ahead and absorbed and dispersed the break that was in his aura. The guy was very thankful, has he didn’t feel ,as he called it, the same old pain. I work with energy, raw, tapped, dark, light, I don’t care. Energy is energy, and I use it however I see fit nowadays.