2/2
Dreams - None, but visualized sleeping with someone.

Physical notes - Anxious, fatigued, kidneys and back killing me up to center spine.

Mental notes - Tried evoking Lucifer twice with no candles or incense. I did feel a presence, alternating hot and icy, and a reassuring presence. Gave greeting, petition and thanks.
I think he may be telling me to use IcyHot for my back.
2/2 Tried using Lucifer seal and sigils on talismans as sigils to open with Lucifer’s enn, chanted same as yesterday except a bit more rhythmic today. Some signs of flashing sigil, requests made after greeting. Thanks given.
Tried evocation with my phone as a black mirror slant seated in the ashtray, caprlturing the reflection of the Lucifer Xv symbol. Chanting enn had the circle seal open a bit.
Still no positive manifestation. Does it need to be done outdoors? 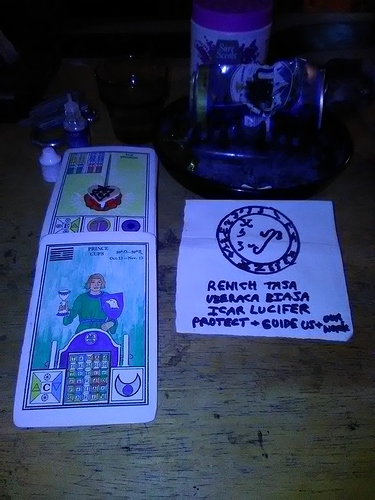 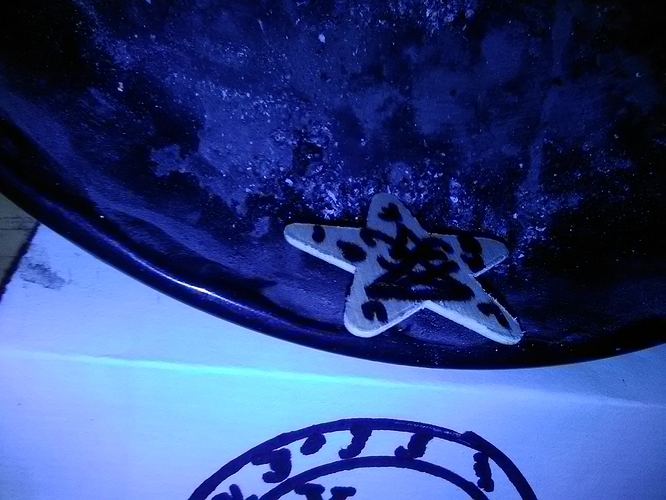 15175978204491375683497.jpg2592×1944 636 KB
Started another round, now praying the enn and petition on a rosary. As I’m three beads away from one round of a rosary, my roommates male cat comes out, sits and stares at me.
He jumps up behind me, where I’d felt chills and hot flashes, then looks at the altar, sits on the altar and stares at me.
So I petitioned the cat, hugged him and thanked him. He seems content. 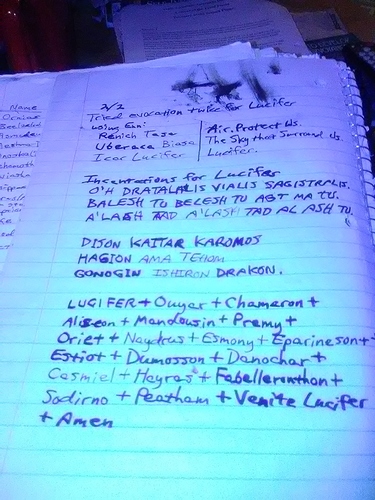 15176228963891472085440.jpg1944×2592 1.07 MB
Make several public only talismans, and private only talismans, charged and empowered with force for form.
A working for natal angels and demons.
FWB Magic
Studying grimoires to see what they did and why.
Connecting with ancestors and Celtic goddesses and gods and roots.
Bridging the magic across names.
Preloaded rituals as barbarous words, that are instaneous forces.
Tools, Altar, Pillars, Floor circle/temple

This was on my mind:

Meditation was on sadness, and its ties to desires. Letting them go with honor is freeing. Still, sadness remains, oh well, thats life.

Have you evoked something before?

I thought I did. We didn’t shake hands or anything.

thought I did. We didn’t shake hands or anything

I’m talking before these attempts. Is this your first evocation?

Neither as far as I know, but it’d with all of them for that matter. That is a good point, how to find out if a task was in fact completed.

Feeling a bit of feminine energy and thought trains however.
Thinking about friends, my thought was everyone an island, temporary colleagues, only a successful relationship is friend or family found.

how to find out if a task was in fact completed.

That depends on what you asked for.

Okay … Your point being? Sorry, I have no idea what you’re driving at.

Sorry I was trying to help you. Nevermind then.

@Aiden_Crow … Sorry … No, I just dont understand, I didnt mean to come off as an asshole.

My evocation experience was like this …
I have a request to accumulate wealth. I evoke a zodiac angel from 10-20’ and 20-30’ Virgo. I then evoke Ghob. As I have zero psychic skills or clairvoyance, I can see black or transparent shapes moving in the room, dots of multicolored light, or a safe but productive feeling in the room. Candles flicker and incense once steady like the candle, swirls about with no reason once names are called.
I don’t see them, I don’t hear them. Instead I sense a change in the atmosphere and pay attention to it. I see clues. I give the command, and later dismiss, invoking energy through the middle pillar pentagram or hexagram. There once was an issue to help someone with clairvoyance. I evoked Paralda and Sastan. Once frustrated as the sigil would flash and candle and incense would have a reaction, I didn’t sense the presence. I held the sigils over the candle, and smoke instantly enveloped it as like a bed.

I did sense a presence yesterday chanting the enn, I felt cold and heat over my back and shoulders, and a leaning on me or hand on the shoulder sensation.
I would say the presence was there.
Walking outside today, I chanted the enn. I don’t feel as much sensation compared to a heartfelt “Hail Lucifer!” toward the morning sun.

But still, I don’t know that there was any accountability from evoking gods, goddesses, elementals, angels, demons, spirits, etc.
I may have noticed changes or felt a presence concluding it was successful.
It seems to me the major keys to successful evocation are clairvoyance and Clairaudience learned ability.

2-4
Stared at sigil brlie while chanting melodically the enn.
Stared at Thaumiel sigil below while vibrating enochian style the Lucifer enn. Felt a presence, Thaumiel flashed a bit. Noticed it as a face. Said petition after “Hail Lucifer, Lord of Light!” 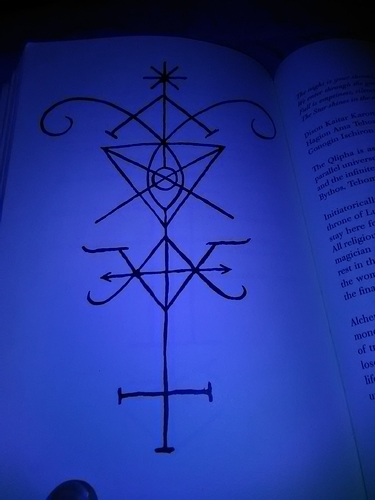