Anything else that might help me contacting Freya will be useful

Certain Runes or sequences of tunes can be attributed to the gods. In fact Odin is basically the patron of Runes and the original three lines of the Runic alphabet are attributed with a god (specifically, Freyr, Hagal and Tyr). I haven’t heard of a Rune dedicated to Freya but I can see why Fehu would be a choice for her sigil.

If it helps, here’s a link. She is commonly associated with cats. https://norse-mythology.org/gods-and-creatures/the-vanir-gods-and-goddesses/freya/

@SabahSnoblod Thanks, I have read that already

You could spell her name out using a runic alphabet.

If answer to 3 is YES could the Fehu rune be used as the sigil of Freya?

Yes, the runes can be employed as a form of sigil in evocation.

For freya or Freja that the swedish spelling goes have to my knowledge not a seal as we would have for the 72 demons in goetia.
The simple way would be to use the runes from the Futhark to spell her namn then combind those runes to a singel seal or bindrune and use that. The way you combind the runes should be a way that your intuition helps you with, the 2 different ways i would chose among is,
1 stack all the runes ontop of one another which would give you one ”single” Rune in the end.
A more traditional way is to make a sort of bindrune in essence you combind the runes from the namn to one bigger symbol.
The first method enda up with a symbol the normal size of 1 rune the second method gives a bigger symbol that more would look like what most of us would consider a seal.
So do whats up to your own liking. 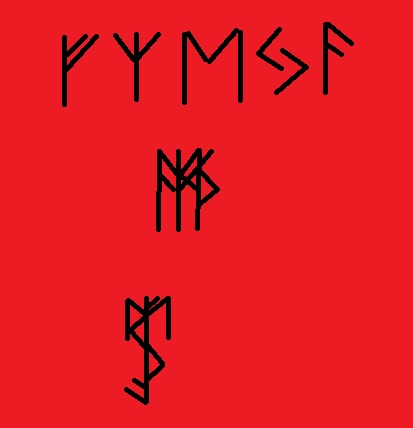 Did an example for it for the fun of it.
The top is the spelling of frejas name, the second raw is the runes stacked where i try to align them a little to not make to big of a mess with it and the third image is a little more seal type inspired combination, The lines for all the runes are in the symbols.
Now the number 3 is important in norse viking magic aswell and with the runes so another level would to make a seal typ symbol but trying to combine the symbol 3 times.
Take my 3 one for example you could copy it 2 times and add it to the fist in nice 120 degre angles and get a nice seal that way.

Cool! That last bindrune really looks like a sigil.

I see that you used Algiz instead of Raibo for thr ‘R’ sound. Is that a typo or can Algiz pronounce that way?

Here are two ways to spell Freya in runes.
Top is Elder Futhark made to fit the Latin spelling 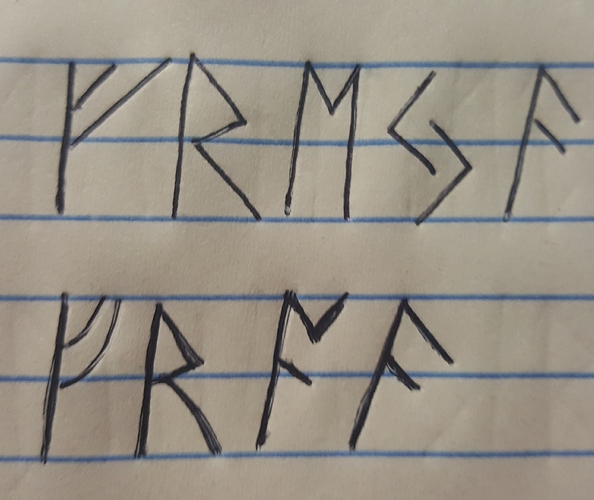 Edit: I call the alternate Ansuz “Atlas”. It makes long and short ‘A’ and means Titan. Ansuz makes the ‘ah’ sound and takes the place of ‘E’ to modify other vowels.
Ansuz still gets plenty of work because I match American pronunciation. I’ve noticed that we get lazy with lots of vowels and just use a neutral vowel that could be almost anything. Ansuz plays wild card for most of those.

No its not a typo actually, even thou Raibo may be the more common the Algiz also goes for R and z aswell depending a little of which of the futharks one look at. For the oldest one ”Kylverstenen” it doesnt but look att the futharks that are 50-100 years younger its more common.

Interesting post here. I sincerely want to work with Freya and I have zero connection to Viking lines. After doing some research, I have a very simple question.

Are Freya and Frigg the same person?

Freya and Frigg from my experience are the same, and Freya is also the thrice burned Gullveig, I find this connection because Gullveig seduced Odin and his brothers, Vili and Ve, Ve is often linked to Loki and Vili to Hoenir. Loki ate a burned heart which was Gullveig’s as well.

Oh course they can also be considered different if it helps the practitioner either way.

Thank You - I appreciate this opportunity to learn.

I feel drawn to Fólkvangr, for various reasons. Does she or will she work with people going through a dark period of change?

I was in a moment of dire straint emotionally like I was either stuck in a dream and couldnt wake up or that I woke up from a dream and seen this cold lifeless reality that honestly made me want to drive off the side of the road a few times on my way to work. I petitioned freya for help and she brought me peace in a week time like I asked.

I did have prior bonds with her as well.

I’m glad you are okay.

I guess shadow work could be considered an intense battle; but I need to get someone out of my head. And my heart. They are with another, so, I must not entertain improper thoughts. At all.

Would she still be a good one to work with?

I believe she would yes

Then I will learn how to summon her. Thanks for answering my questions.