A pentacle (Talisman) from Greater Key of Solomon; an excerpt from the book about the pentacle:

“The Fourth Pentacle of Jupiter. – It serveth to acquire riches and honor, and to possess much wealth. Its Angel is Bariel. It should be engraved upon silver in the day and hour of Jupiter when he is in the Sign Cancer.”

"Editor’s Note : Above the Magical Sigil is the Name IH, Iah. Below it are the Names of the Angels Adoniel and Bariel, the letters of the latter being arranged about a square of four compartments. Around is the Versicle from Psalm cxii. 3:– “Wealth and Riches are in his house, and his righteousness endureth for ever.”"

People should know that this Pentacles are not limited to one way, means or methods. They are not only made to be on metals, they can be written on parchment paper, ordinary paper, animal skin (lion, tiger, frog, eel etc).

Also the talismans described in the Greater Key of Solomon can be tweaked. For example, when it says a certain Talisman there should be written on a Gold plate… someone with the knowledge can tweak it. Write it on a paper, but add recipe or recipes that will power the Talisman so that it can have the same power as the one written on gold plate, or even more powerful than it.

Here is a money spell done with this Pentacle.
Write the Talisman on a clean A4 paper, and secret seal of Solomon. Viz: 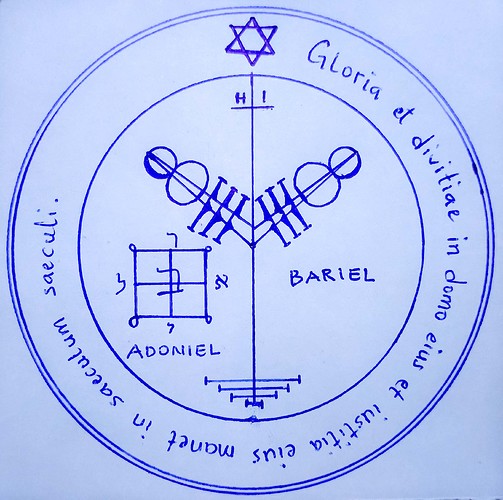 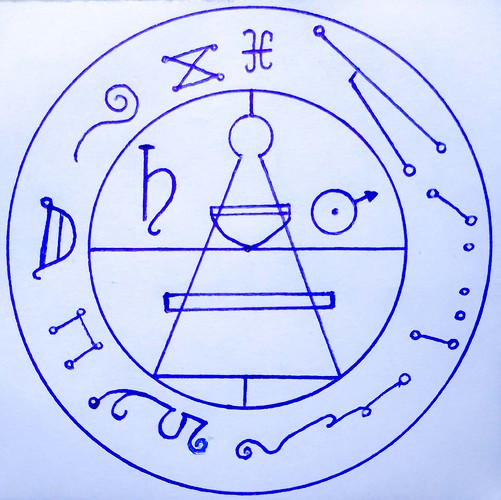 If you can’t write the Talisman, print it out. Same with the other character.

This money spell has two ways or methods. Before I go further I want you to note that this spell may not work for you if you have challenges in your path. Because it will disturb the Spirits behind the spell or delay their work. At times the spell will look like it will work as you will notice that people will promise you money, friends will promise to send money to you, people will come for whatever you sell but won’t buy, business will look like it will boom but it won’t. These are signs that the spell did try to work but it’s facing troubles.

For those who have no source of income or any business at all, this type of spell won’t work for you. The spell can’t work alone.

The spell is not a strong almighty spell but it suffice.

Get a small jar of honey, place the seal beside the jar or bottle and tie them together with two threads: color Black and White.

Get a liquid soap or soap solution you can bath with, pour the ash into it and bathe it daily.

••• The spell can be made into a strong powerful spell, that even someone with no job will get money from friends and families around but I fear that it will be abused, I couldn’t let it out.

Let’s say you need money from a certain person, if you add a magic square from that of Abra’Melin book to this pentacle, plus two recipes, sit back and relax. Because the debtor or selfish aunt or uncle will surely grace you. But I don’t use such spell because it kinda doesn’t have a “STOP”. The people you directed the spell to will want to keep giving you money, and greedy person won’t be able to say ‘No’. Because the moment you say “NO” any time they want to give you money, the spell will work no more. And the people will be back to their senses.

Can you do this with any of the pentacles?

Oh no, not any of the Pentacles.

There is one of the Pentacles that need a leaf that was taken up by whirlwind, you quickly grab it before it touches the ground.

I remember one that need stone from the bottom of a river, and a pebble from the rock of a waterfall…

One method isn’t for the pentacles.

Did you figure those things out yourself or do you have any reference material?

There is one of the Pentacles that need a leaf that was taken up by whirlwind, you quickly grab it before it touches the ground.

@luxfero I have question. How do you clear the blockages and challenges that prevents the magic from work?

Did you figure those things out yourself or do you have any reference material?

I got the knowledge through an Art that I practised and at times I contact the Angels who possess the knowledge and ask about the recipes to use.

How do you clear the blockages and challenges that prevents the magic from work?

There is no one way to clear blockage, so one need to know what type of blockage it is before knowing what to use to clear it.

I got the knowledge through an Art that I practised and at times I contact the Angels who possess the knowledge and ask about the recipes to use.

What angel is this?

Hello, it’s quite useful, just a quick question - is it necessary to stick to the Day and Hour of Jupiter when its in Cancer?
Thanks in advance.

I think you’d still have results if you didn’t, but if you follow the spell to a tee you may get better/stronger results

if that’s possible for you of course! if not, go for it and give it your best shot!