I consider it an honor to reveal a first look at our all-new Compendium of Lucifer-Amaymon. It features the world’s FIRST grimoire of Amaymon and makes official contact with the Second Demonic Gatekeeper from Outer Darkness, Lucifer himself. 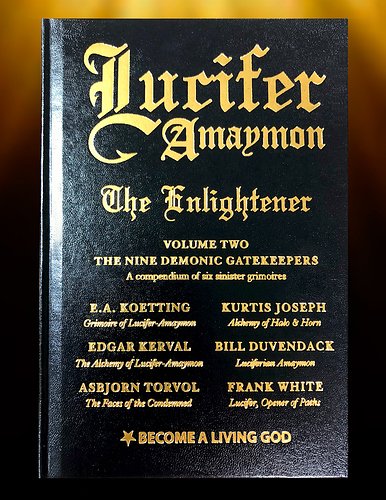 Lucifer has unmasked Amaymon as his last, darkest, and eldest mask. The Light Bearer unveils his true face as his solar power supercharges human evolution.

It also excites me to unveil a photo of our all-new Flag of Lucifer which comes as a gift with every leather edition copy of Compendium. 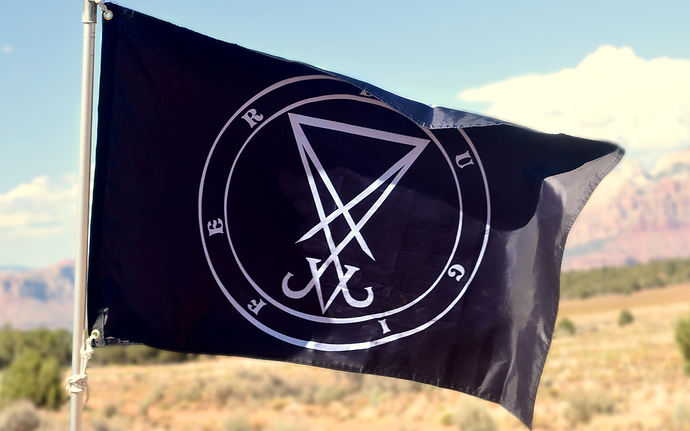 Amaymon is perhaps the most obscure of all the Gatekeepers. His name has mutated from the original name invoked by religious cults that first worshipped them. Who was Amaymon before he was Amaymon? If he is another dethroned and demonized god of an overthrown civilization, then what god was he? To receive answers from his very lips, I entered my Temple to begin the ritual of Darkness Communion… — E.A. KOETTING

This work offers examples of harnessing sorcery to obtain human liberation en masse. It is unlike anything else ever written for the Ancient Gods of the craft, as such, it will not be accepted by all. How do we syphon the knowledge of the Dark Arts to manifest in collective consciousness the need to evolve unhindered by external forces? This contribution brings forth a possibility of an answer… — KURTIS JOSEPH

The wisdom gotten through the deep workings with Lucifer-Amaymon begin a process of transmutation, a deep inner-development. Every man and woman might experiment awakening the inner fire, but all of them will have different final results in the spectral light of Lucifer. When we enter his astral temple and learn how to absorb his sacred mysteries, we experience alchemical metamorphosis… — EDGAR KERVAL

More and more people are reclaiming their own personal power after centuries of oppression. Lucifer is almost everywhere in today’s society, ranging from a television show to musicians who brandish his sigil. The Light Bringer is bringing illumination as we move closer to the Age of Aquarius and the Age of Horus. A true harbinger, Lucifer precedes change. In short, Lucifer is everything you ever wanted, and everything you didn’t, for the light that helps growth also burns… — BILL DUVENDACK

In every mythology you find the narrative of a hero who defeats the villain. The villain is portrayed as evil, the hero is presented as righteous. These beings, Lucifer, Satan, Loki, Baphomet, the Devil, and Iblis are all the faces of the condemned. What if I told you these Devils actually represented what’s best for humankind? What if I told you they represented love? Most outside the occult would disagree with me, but together we will discover a new reality… — ASBJORN TORVOL

Lucifer’s sin was to question authority and to refuse to accept a hierarchy maintained, not by virtue and merit, but by violent threats. Today mankind is on the verge of making a new evolutionary step forward. The problems we face as a species are the result of our collective level of consciousness. As we finally awaken our inner world, commune with the spirit world, and maintain a working relationship with inner dimensions, the collective physical experience will reflect that… — FRANK WHITE

Journey with us into the nightside of this Second Demonic Gatekeeper known as Lucifer. Learn how to unmask the Elder Shadow called Amaymon and witness the true face of Lucifer for the first time.

Very excited about the Gatekeeper series!
These books look amazing too!

Having frank white in there changes things

Saving up for it

I click the link but all I see is sign up for the free chapter. .how do you order?

scroll down the page

Did that too…went catalog still got a sign up 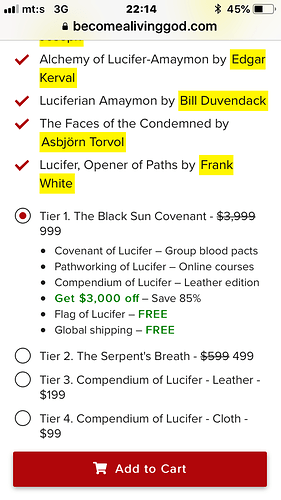 Well hell … I’m missing it some how

Edit: I found it somehow was clicking on the wrong thing.

Hi there dear brothers and sisters in magick, dear BALG-Team there’s only one problem I would urgently like to address to E.A. Koetting and A.Tjorvoll.

Selling one’s soul creates an immense sense of spiritual discontent instead of liberation, it creates self-enslavement, due to the fact that it creates a hugely craving that can’t be replaced by anything but one’s soul or soul-part that is dislocated alive…permanently. I did it when I was a teen and really it not only sucked but it messed my life up for the purpose of making me realize that particular thing. It is not like a pact that helps you, it makes you wish you felt more whole the entire time and is not could for spiritual ascent, light nor dark.

This has also been confirmed by Archangel Raziel who among perhaps other beings light or dark can help to remove such agreements. It is not a pleasant thing and is indeed of a different category than the other concepts offered here. It creates an unsatisfaction that can’t be soothed by anything indeed and gets bigger and worse. Illuminati adherents that sell their soul for fame or anything also have that problem and become largely unbalanced and attract people into their lives that reflect that self-oppressive choice towards oneself, which results in abuse to sometimes the highest extent, making one regret having made such a a deal.
(again it’s not like just making a regular pact either).

Also generally, purely technically spoken (and this is not a philosophy nor belief) we are all that is, no more, no less, ultimately as the nature of Self -We ourselves are God, or the Cosmos, or the One, however one would like to call it- and it creates an enmity and conflict within oneself instead of finding harmony and balance within oneself- harmony within gets reflected in bringing without. So such an agreement (selling one’s soul) deprives oneself of any peace or harmony with oneself, and ultimately one’s full-on freedom, be it as a black magician.

Some time ago E.A. released a video about saying he would not sell anyone else’s soul
I guess our brother Asbjorn Tjorvoll might have missed that, accidentally-but it was a very important one for many reasons, and I was glad that E.A. put it there because it can help others to go in a self-liberating rather than self-enslaving way when it comes to ascent, dark or light.

Peace and liberty to all of you,
H.

Frank White is one of my favorite Luciferian figures in this generation.