So there’s a guy who tried to rape several friends of mine. Last week, he showed up at my house uninvited at a party my sister threw. I didn’t know that he was there until later in the night. When I found out he was there, I created a powder out of graveyard dirt and chili powder, charged it by the power of João Caveira, and blew it on his windshield. And then I told his ass that he had five minutes to sober up before I make his ass leave. Here’s the grand finale of a curse I’ve been working. I stabbed a red candlestick with his name on it with seven rusty nails. I burned that and did the usual baneful visualizations for around four days. When the last nail fell out of the candle, I gathered them in a bottle, filled it with vinegar, old rusted bullet casings, rat bones, chili powder, and a name paper. Below is a picture of the consecration ritual. Laroye João Caveira! 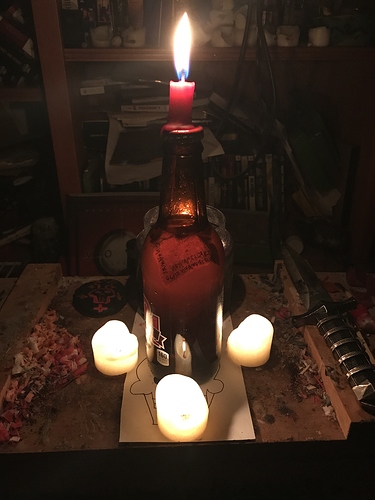 Please keep me updated. I’d love to hear your results.

Would hate to be that guy

You’ll hear about the results

I found an abandoned mountain lion den so I think that’s where I’ll leave it. His life is about to get a lot lonelier and much more interesting

could you see some results, Fráter ???

I haven’t but it’s my fault. I didn’t work the system properly and it wasn’t for me, so I went back to Norse magick and Vodou.