Ok so I created this communication method plz see pick.
I want to ask Lucifer yes or no question for him to indicate a yes or a no.
Would this anger him or be disrespectful?
What should I use as the indicator?
Stone, glass, wood …
Also I want to do this together with my wife. Would it be more effective or not? 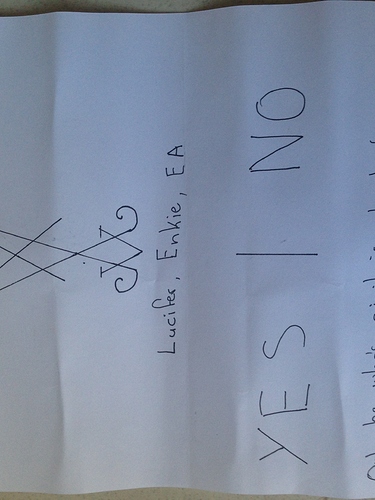 Also any advice is welcome

How does wood sound, as wood is of Earth, look at ebay for a planchette.

Don’t worry about the spelling, man. The spirits will get your intent even if you scribble illegible lines, as long as that intent is there. This could work just fine as a sort of “pendulum mat” for communication. I would also suggest wood, simply because it absorbs; blood, consecration oils, raw energy, you name it. It would be more personal. You can carve a planchette or pendulum for this; I would even suggest doing so, then consecrating it for service in communications with the Lucifer specifically, as it will make the bond closer and add to your level of immersion. I always advocate making magickal tools for the self when possible. You can get a breathtaking block of Gabon ebony for this purpose for very little money out of pocket and it is gorgeous. As for whether or not it will work better or worse with your wife, that depends entirely on her and you. What is her relationship with Lucifer, if any? How does the idea feel in your mind? These are significant questions. I personally will not work with spirits with another present; not because of any founded fear, but because in my head I feel the other person could screw up the operation; so it probably will do exactly that for me. Some have awesome results with group/partnered spirit work.

If you only give it 2 options you’re going to get false replies, there’s a good post explaining this here:

The problem with coin divination is the inherent problems involved with flipping them. They aren't 'random enough' for you to really reliably use them for divination because probability rules interfere too much with what you are asking. Tarot cards or Runes are much more reliable, because they are inherently less prone to failure from accidental 'user error'. If you flip a coin, there are two outcomes, heads or tails. The outcome is able to be influenced just by you flipping 'badly' or not put…

Suppose you ask “Should I ask my boss for a pay rise?” and the answer is really, “Yes, but not at the time you think” because he’s worried about the annual returns or something - with only 2 options, there’s no room for subtlety, and plenty of room for either answer to screw you up - if “no” then you donlt ask him next month when he’s just seen profits rise, if “yes” you blunder in too soon and piss him off.

You don’t need to add as many variations as some methods but a “maybe, yes” “maybe, no” and possibly an “ask again later”/“you need more information before acting” kind of clause would be helpful, they give some wiggle room on complex issues.

Just get a Ouija board or print one off Google Images online. Put Lucifer’s sigil in the center. Meditate and open the sigil to him. Ask your question. Use the pendulum.

Thank you all for your answers. I shall alter my board and use s carved pendulum. I’ll report back on how it went.