I dont know if you mentioned this but in Jewish, im pretty sure Jewish, lore Samuel is another name for “satan” & people often confuse the 2.

According to Judaic lore, he is an archangel under God. It was only when the Judaic lore got mixed with Christian lore that Samael then had anything to do with the capital-S Satan. This is because the Christians confused the Hebrew term “satans,” meaning adversary, with their notion of an enemy of God.

The “satans” were originally a group of angels whose job it was to provide evidence for why a soul didn’t belong in the court of Heaven, and Samael was their leader. As I said above, basically they were the prosecutors, not rebels against God.

oh okay, yeah I know it’s a capitol S but I dont really care that much about the capitols of names but that makes more sense with the Christian & Judaic lore mixing

They both share the title of Archangel of Death. It’s just that Azrael is more known for this role.

This is true. It is said in the lore that Samael is the archangel that came for the prophet Moses.

It is said in the lore that Samael is the archangel that came for the prophet Moses.

Close. Moses saw him going to collect the soul of Job and Moses was so freaked by him that he prayed to God and begged him not to have his soul taken by Samael.

Your know @DarkestKnight and @Prophet I was really going to argue that Azrael is the angel of death ( which is true , his name means "help from God so I read) and that Samael was the archangel of Geburah not necessarily death. But then I did some research and it turns out I’m incorrect. Both can be considered the angel of death. So I take correction thank you for sharing that. Now I know.

Btw why is the next qlippoth called samael when samael is associated with golachab/geburah ?

that qlippoth has a different archangel/ demon? No?

The ruler of the Golachab qlipha is Asmoday

Kinda depends on system, but in the qliphotic literature Samael (the name/entity) is seen as the highest aspect of the devil/Satan and consort to Lilith.

In this sense, Samael is an overarching force of the whole of the tree of death.

Samael means poison of god, and this poison imagery is associated with the qlipha as it strips and kills your limiting beliefs and false perceptions in preparation for the higher mysteries/initiations/lessons further up the tree.

It is the “solve” of solve et coagula

Which makes a lot of sense when you consider the fact it’s the counterpart to Mercury’s sphere on the sephirotic tree.

On the Samael Qlipha, the magician makes a pact with the dark forces and realizes the invitation of Friedrich Neitzsche to re-evaluate old values. Insanity becomes wisdom; death becomes life. Samael is the ‘Poison of God.’ Here is where illusions are poisoned, and all categories and conceptions are deconstructed until nothing is left. The dark side of the astral plane could be compared to a chalice filled with poison or an intoxicating fluid. While Gamaliel is the chalice, Samael is the elixir and the following lower Qlipha, A’arab Zaraq, is where the magician experiences the effect.-Thomas Karlsson

Excerpt from the book of sitra achra: 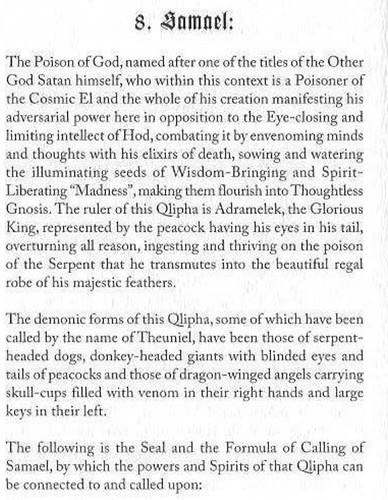 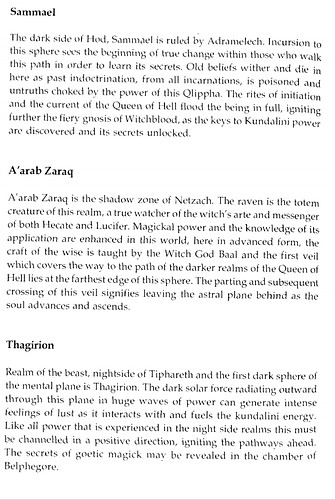 In this sense, Samael is an overarching force of the whole of the tree of death.

The YouTube channel Legion of Lilith has some really good videos on Samael. Would highly recommend.

I think it was samael talking through you to me now,
I was just now wondering how to defend myself against some magick and then I see the notification…

No problem! That’s interesting. Cause I’ve felt like he has been around today. I even put my necklace on with his sigil and lit some incense for him when I got home from work today.

Have you worked more with him?

I’ve only felt a calling to do so, just doing my research at this point. If there is more I stumble upon though in regards to him I will definitely share.

I think he is good for protection against baneful workings

Most definitely, this article is good. Talks about a lot of what he has to offer. You may have already have already seen it but I thought I’d post it anyways. Samael ~ Holy Archangel of Darkness and Death, Adversary of the Angelic Dominion. Poison of God. – Demon Encyclopedia

My biggest beef with that article is that the author tries way too hard to make him seem more appealing to demonolators. You can tell because the author has to constantly reiterate that he’s a being of darkness.

While an angel of death and destruction, he’s not an angel of darkness, nor was he ever “rejected by the light”.