Zagan was very peculiar… Though useful when I talked to him and even now he is sending information.
He appeared to me wearing embroidered robes and looked like Sean Connery wearing a Guy Fawkes mask crazy as that sounds and holding a flask of water and mist which dissolves to swirl around the space we were in.
He flows like water appearing vastly different even in personality between people and by time but like water which flows and changes he is still what he is at the core no matter the seeming form.

He was expecting me to call and said he would help me with a project I am working on if I call on him tomorrow if I don’t figure it out from his influence before hand among the other things.

Now a bit of an interesting thing as we talked his face seemed to change to various mythical beings he even explained the tale of him changing water to wine as ancient cool-aid recipe which looks a hell of a lot more impressive with sleight of hand.

I will update tomorrow when I call him as well.

Alright I missed a day because of illness and overdoing some things.
Zagan did pull through on what he promised and I did partly figure it out in fever dreams as well. The project I have been working on has been related to energy like bioelectricity for heavy psionics such as telekinesis. Since elemental and astral style energies haven’t been cutting it in my practice not being heavy or reactive enough physically I needed to use my own physical energy which is very limiting and draining due to how long it takes to build up over time with exercise and recharge once used. Zagan helped finish showing me how to convert from the lighter more astral energies into the heavier energy that I needed allowing me to recharge myself much faster… Now these pictures won’t make much sense and I will probably not be able to explain them very well so take time to contemplate them or ask your own spirits to help translate the idea. 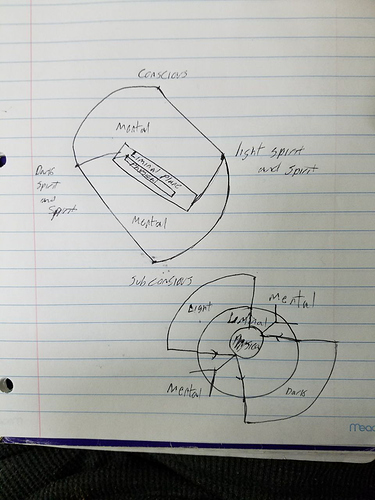 image.jpg960×1280 190 KB
What is presented in both the pictures is crude overlay type map of energy. You have the conscious mind which links directly to spirit and light type energies which is usually used and attributed to most magick. You have the elements and all the normal types of things here.
Then you have the subconscious which links to the same basic sets and also darker energies. The dark primal side of the first. You can see it as the difference between the kabballah and qlippoth. They both have the same basic energies but also have their own unique fabric but are still part of the whole.
Now it all connects to liminal plane that which surrounds the physical and is the realm of manifesting magick and is where most spells and beings are condensed when called or manipulated to have physical effects. This plane directly influences the physical plane subtly and directly. Most spells and beings taking the path of least resistance getting our roundabout manifestations. Now between the conscious and subconscious surrounding this is the mental realm and all the varying states between the two and thus the different mindsets and trances we use to access these faculties.
The second part of the picture the sphere shows the mental directly connects to the physical and the spirit needs to connect to the mental first. Now when you want to do something like telekinesis you either condense a lot of astral type energies preferably from the dark subconscious faculties because those are linked to more primal and survival based urges and the subconscious has control of way more energy in the body to help it manifest.
Or… you have to use the energy directly in the physical from your body bypassing the middle point of bringing lighter astral energies through the mental then liminal realms to manifest.
Now the way Zagan explained how to recharge myself was to completely bypass the astral energies entirely but instead condense the mental straight to the physical and by that pull from the liminal realms instead which can be seen as a quantum foam if you wished. It is a hard thing to describe but instead of reaching for energy you would normally gather focus on the energy in your body along your spine and brain and when you breathe in condense your imagination into it not drawing on any energy but your imagination. That is the best I can describe the technique and so far it has been working quite well.
I was warned over time this creates an instability as you breakdown the barriers between thought and material and so it causes more of the strange randomness that often occurs such as shorting out electronics and other such energetic activities.
1 Like