Hi. I wan’t to start working with Angels. And I have an idée of Evocing the Angel Paltator.
If any one have suggestions or what so ever information to share i would like to hear.

I would like to add that I don’t have any experience of Angels at all. But i am interessted in getting to know one at first i guess.

So as I have read Paltator can improve my spirit sight.

So i share this photo if some on wants to see what i know right now about this Angel. 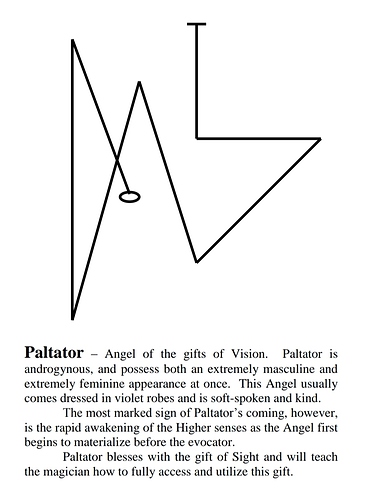 And as I mentioned any advice how to evoce Angels is most welcomed. Tips and tricks. In best regards //Addi

assume that he is there during the evocation and open yourself up.

@Addi666 working with angels is normal and Paltator has a great sign in his house arrival … When I made an evocation of him he was even able to see it, but I was interrupted and did not get anything from the evocation!

Ok and in normal you mean? “Safe”

Ok i see. Are you willing to give it a new try? I can’t preform the Evocation right know i am at a hospital with my gf. And I don’t know when i be back home alone to be abel to preform it. But in time i will.

Evoking angels, i.e. summoning them in a fashion which binds them to your will and command, really pisses them off. I’d advise invocation exclusively.

So when you summon Angels you make them angry why? Or did i get this wrong. I don’t know how to invoke realy.

Ye if you summon them forcibly in the same manner as you might a demon or a djinn, it’s really gonna piss 'em off. The consequences stand significant chance of being dire.

Invocation on the other hand is at its core a “call” to the entity, which though compelling sometimes to the point of borderline irresistibility is nevertheless technically something the entity is answering voluntarily.

Ok so if i gaze at a sigil and calling by the spirits name then the spirit can feel that i comanding it to show up? When i do a evocation i only do just this. I use no tools or any thing. So if i preform an invocation the spirit come if it wants to?

Ye that’s the more useful delineation of the difference. Some people just call channeling invocation and calling a spirit into form in a room outside of themselves evoking. But more usefully, invocation refers to invitational call for the spirit’s presence, while evocation is willful compulsion of it.

Ok i see. I will read more about invocation.

vocation refers to invitational call for the spirit’s presence, while evocation is willful compulsion of it.

Gotta disagree with this right here.

While compulsion and command have also been traditionally used in both, it is downright silly to say that only evocation is compelling a spirit while invocation is inviting it. That is not true.

The terms took on the meanings you’re giving (which I also mentioned) and the ones I gave later on in different paradigms. I’ve also already mentioned why I think the latter pair of definitions is less worthless.

it is not him but i can help you guys.

Example?
I have never found this to be the case in any grimoire I have researched. Could you cite me a source?

Thax for you reply DarkestKnight#

As i think of evoking an entitie i choose if i do this a friendly way and show my support and trust in not using any tools for the Evocation. And invocation i have not tried but when i feel a connection to a spirit i would ask if it would like to be invited in me. But i don’t think eny spirit have done just that get.

In a atempt to evoke Sitri i feelt the energies in the room change.

In evoking Bune the same thing but i did not know at The time i was facing the wrong direktion so i heard her say some thing behind me.

Know i now to not face North when Evoking Demons. 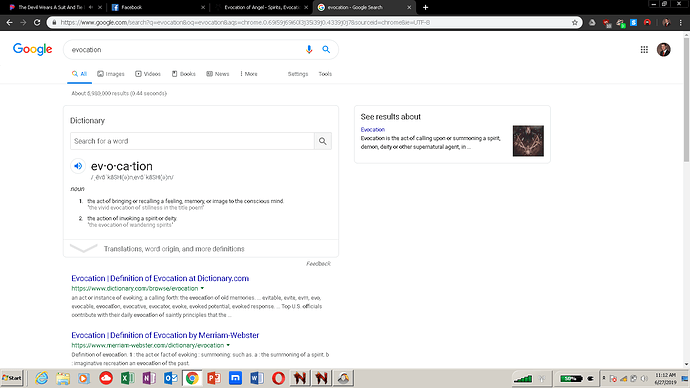 smartassery aside just look into the etymologies.

The evocation may be empowered by candles (for Angels usually white), incense (saffron, musk…) etc., but after all I practice without “props” myself, at least for now

A question on combining spirits for a singular purpose, say awakening your psychic abilities. How would you structure that for instance using some combo with some or all - Paltator, Sastan, Raziel, Tah’ka’yat, Mepsitahl & Paralda ?
I know in Damon Brand’s book “Magick of Angels & Demons” he kind of gets into that but those are preset combos.
What do you suggest?

Thats my way to do it as well. It feels like if i can’t just do it then i will never be good at it.