Is there anyone familiar with the Enochian Watchtower Tablets & how to properly use them?

I’ve made my own earth tablet a few years back & put it to use a few times though I wasnt sure if I were doing it correctly & I know I was making something happen because as I was scrying I would get these flashes in my mind almost like a lightning flash & I would just continue to my work. I know a few things about the tablet I just want to know if I were even doing it properly ive never heard of or witnessed anyone give an example so I’m not sure what to even think people have only warned me thats about it.

I’ll give a short description of how I would do it & y’all let me know if I’m right on or whatever the case may be. 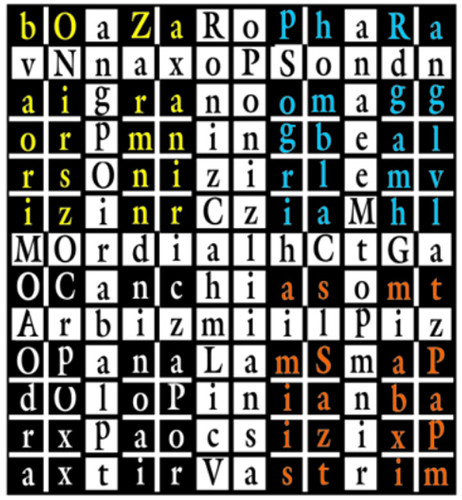 So on this tablet above I would start off by saying/vibrating “Mor dial hctga” which goes from left to right, then I’ll say/vibrate “iczhiha” which spirals at the center of the cross, then depending on what I wanted to be done lets say I wanted to work with the element Air of Earth so I would vibrate “angpoi” & I’ll choose one of those five names marked in yellow like “boza” or any of the other then I’ll state whatever it is I would like done & finally vibrate that last piece which forms the cross “vnnax” & thats pretty much all I can remember from that

If you don’t get any replies, try bumping it later, this time and for about the next 6 hours is usually the quietest time on the forum, and you can reply on your own topic to bump it back into visibility, that’s allowed in the rules.

I’ve only used them Success Magic by Damon Brand, I highly recommend it if you don’t find what you are looking for. Granted they lay them out in basically a sigil form, but he explains which watch towers you’re calling on for each ritual and things like that.

To work successfully with enochian temples best is Benjamin Rowe. In his book you get exact definitions on how to create it. Also the workings with the 6 Seniors facilitates than your own workings. Of course the earth tower is the first to begin with, to understand nanta you should meditate on the passive spirit of the universe

Thank you @Keteriya & @Rav I’ll look into it