What are your experiences with this spirit?

Where does the spirit originate from ? What book ? 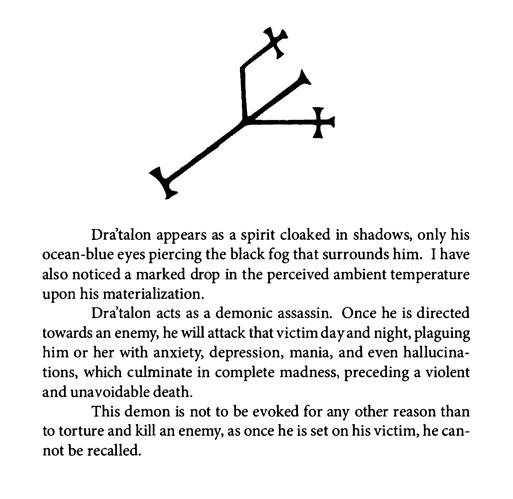 I heard people say it is a thoughtform , however I don’t know how true

Where does the spirit originate from

Dra’talon is one of the Nether Lords under Azazel, and is found in the Book of Azazel by EA Koetting.

I heard people say it is a thoughtform

People seem to say that a lot about Koetting’s work for some reason, as if the spiritual realms aren’t large enough to hold millions of different spirits, but only the small handful found in traditional books of magick. They seem to forget that even the traditional demons and angels had to first reveal themselves to somebody back in the day.

The spirits in the BoA are definitely not thoughtforms. They are very powerful and easily rival the more well known Goetia.

I have never had the need to call upon Dra’talon in particular but I have summoned a few of the other Nether Lords with successful results.

Which ones have you summoned?

I’ve evoked Ant’harratu a couple times. Who are the other others? Can you post their entries?

I have worked with Dra’Talon with good results.He is certainly not a thoughtform.Cant speak for rest.

Salas’ash brings money, and Halah’thor deals with success/wealth and career. I think their seals are already posted to the forum somewhere.

Dratalon is great to work with and safe